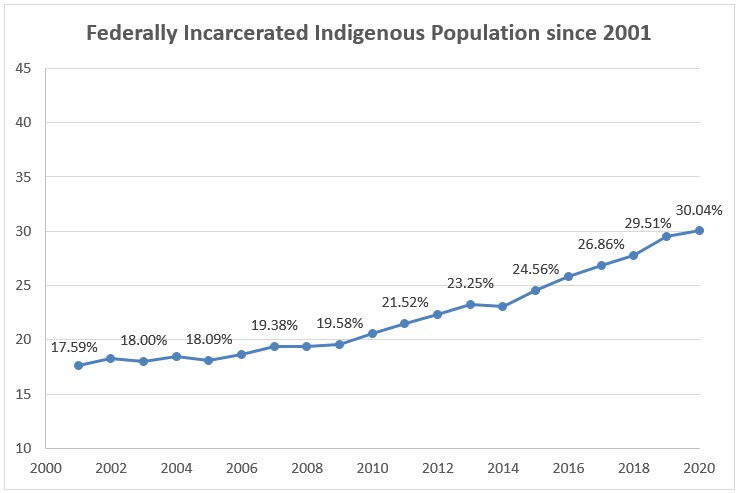 The proportion of Indigenous people doing time in Canadian prisons is climbing so rapidly that Indigenous people will soon account for one in every three federal inmates, the Correctional Investigator of Canada, Dr. Ivan Zinger, said on Jan. 21 in a statement.

Zinger, who acts as an ombudsman for federal prison inmates, was appointed to the position in January 2017.

At that time, people of Indigenous ancestry represented about 25 per cent of the total inmate population in Canada, he said.

But only three years later, that proportion has climbed past 30 per cent.

“On this trajectory, the pace is now set for Indigenous people to comprise 33 per cent of the total federal inmate population in the next three years,” Zinger said.

Given that Indigenous people make up only about five per cent of Canada’s population, an Indigenous incarceration rate of more than 30 per cent is a grossly disproportionate number.

For Indigenous women, the number is even worse: 42 per cent of women inmates in Canadian prisons are Indigenous. 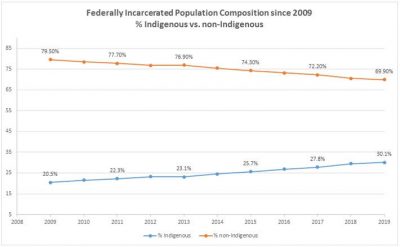 And that is happening despite the multiple findings of royal commissions, national inquiries, interventions by the courts, and multiple promises from numerous political leaders.

But over the years, no government of any political stripe has been able to reverse the trend.

“The Indigenization of Canada’s prison population is nothing short of a national travesty,” Zinger said.

Although he acknowledges that many of the causes of Indigenous overrepresentation in prisons lie outside the criminal justice system, much of the blame falls on the Correctional Service of Canada.

“CSC needs to accept its share of responsibility, recognizing that tweaks around the edges of the system simply won’t cut it,” Zinger said.

And to make that happen, the federal government must lead and direct those efforts, Zinger said.

“It is not acceptable that Indigenous people in this country experience incarceration rates that are six to seven times higher than the national average. Bold and urgent action is required to address one of Canada’s most persistent and pressing human rights issues,” he said.