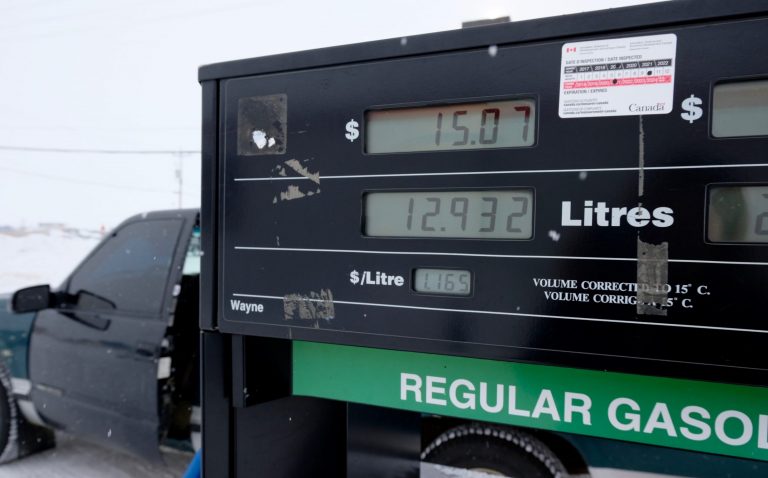 The rising cost of fuel is accelerating the already high level of inflation in Canada and is expected to further impact Nunavut. (File photo by Mélanie Ritchot)

Canada’s rising inflation rate has hit Nunavut, affecting everything from food and sealift prices to the cost of fueling up a snowmobile.

And it might get worse, according to organizations operating in the territory.

“There is going to be a whole other layer of inflation that is going to impact the costs here,” Arctic Co-operatives Ltd. vice-president of stakeholder relations Duane Wilson said, referring to rising fuel costs.

Inflation has risen steadily in Canada, with the annual inflation rate up 6.8 per cent in April — a 31-year high, according to Statistics Canada.

Reasons for the increase include supply chain delays and the rising cost of fuel due to the war in Ukraine.

However, Nunavut has had somewhat of a buffer from the rise in prices being felt in other parts of the country because some businesses would have resupplied their inventories last year, Wilson said.

That is helped by the Government of Nunavut buying this year’s supply of fuel a year in advance, before prices shot up.

According to fuel monitoring organization GasBuddy.com, the Canadian average price for gasoline jumped from $1.55 per litre in mid-February to the current price of $2.02 per litre.

But with northern organizations restocking via the sealift and relying on shipping cargo through flying, Nunavut will become vulnerable to the impacts of fuel prices, Wilson said, creating a potential “double whammy” on inflation.

For Nunavut Sealink and Supply Inc., which operates sealifts and cargo in Nunavut, prices for dry cargo have been raised this year mainly due to the hike in fuel prices, the company’s business development manager Brian Tattuinee said.

The company’s price to ship dry cargo to Iqaluit in 2022 will be approximately $306 per tonne, compared to $277 last year.

But the impact of inflation is already being felt in food prices around Nunavut, said Rachel Blais, executive director of Iqaluit’s Qajuqturvik Community Food Centre, which offers daily meals and community programming.

Recently, it has served free meals to 250 people per day.

“To put it in perspective, this time last year our average was about 115,” Blais said.

Not only is there a rise in demand for the daily meals, there’s also an increase in food costs, which impacts the centre’s budget.

If Nunavut sees fuel prices increase next year due to rising global costs for fuel, Blais said hunters will be negatively impacted because they rely on fuel to hunt and provide country food.

Hunters, who work with the food centre for its programming, supply country food with essential nutrients to Nunavummiut through traditional sharing networks, Blais said.

With less country food available in sharing networks, “we’ll see those impacts [of inflation] amongst people in the territory who are experiencing severe and chronic food insecurity,” she said.

Wilson said a way to improve policy to address inflation would be to change the federal Nutrition North program, which subsidizes nutritious food and certain essential items. As it stands, the subsidy is not scaled for inflation.

“So you’re going to have a cargo rate that has to go up because of the price pressure on fuel, but the subsidy itself is stable” and won’t rise with inflation, he said.