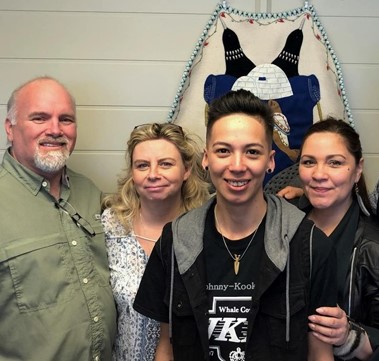 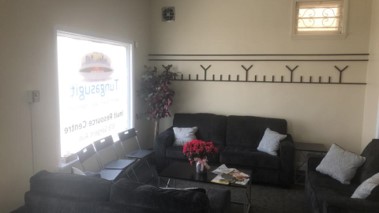 The centre’s common space with a traditional tattoo wall installation created and installed by Gail Wallace and her spouse Ronald Oolooyuk. (Photo courtesy of Tunngasugit)

Tunngasugit Inuit Resource Centre, which opened on May 4, was created to serve the more than 500 Inuit who live in the Winnipeg area, says the centre’s president, Steve Massey.

Although it has only been open a few weeks, Massey said the response has been overwhelmingly positive.

“So many of our guests comment on how long they have waited for a place like this and how welcoming our centre is,” Massey said.

Two years ago, several Inuit in the city approached Massey to help them start a front-line service organization for Winnipeg’s urban Inuit. The group applied for federal funding to open the centre in 2018, which they were granted in early 2019.

Along with a full-time outreach coordinator who works at the centre, Tunngasugit offers a long list of services for Inuit. These services include assistance in finding employment and housing, drop-in hours, Inuit games, feasts, music concerts, assistance with health care access, and a supervised kids’ playroom. 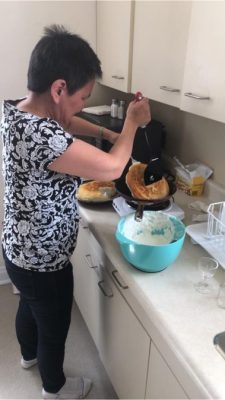 Judy Kappi volunteered to make everyone some bannock during a drop-in day at the centre. (Photo courtesy of Tunngasugit)

“They really enjoy getting together as an Inuit community and visiting, sharing some bannock, country food, and conversation in their language,” Massey said.

The community’s positive response to the centre’s opening has already caused Massey and his team to think about expanding their services.

“We have plans for many cultural programs like Inuit throat singing, Inuit tool making, Inuit drum making and dancing, and language training,” he said.

The centre has also been approached to develop educational programming for local schools.

“We are looking forward to what the future brings. All of our Inuit guests have commented that, even though we just opened, it seems our centre will soon outgrow [the space],” Massey said.

The concert, which is free and open to the public, will showcase Inuit women in music and increase awareness of Inuit music in general, Massey said.

The centre runs drop-in hours on Wednesdays from 1 p.m. to 9 p.m. and on Saturdays from 12:30 to 5:30 p.m. Maxine Angoo, the centre’s outreach coordinator, is also available by appointment.