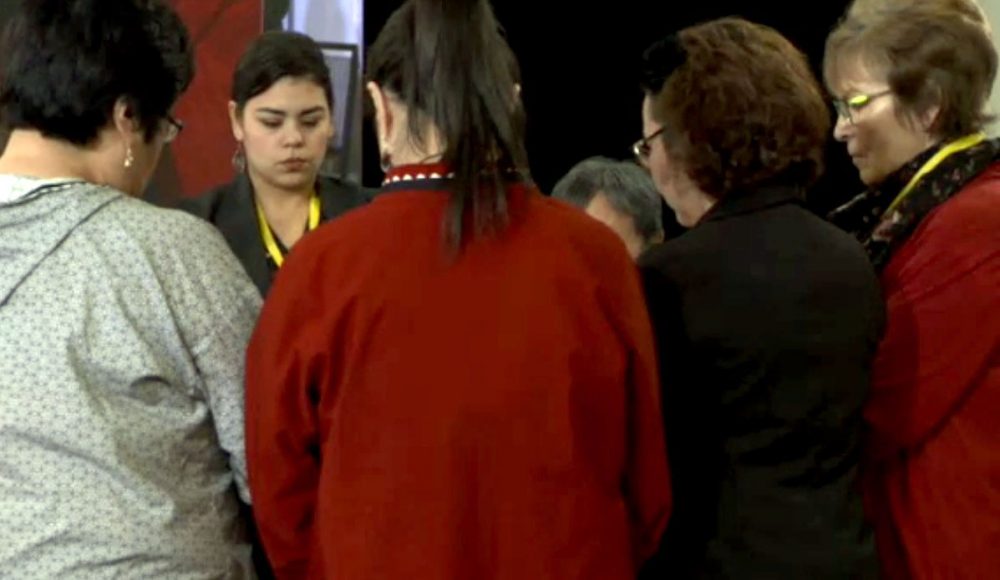 Inuit women representing regional organizations gather to light candles ahead of Pauktuutit’s final submission to the National Inquiry into Missing and Murdered Indigenous Women and Girls in Ottawa Dec. 11.

In its final submission to national hearings this week, Pauktuutit Inuit Women of Canada called for an end to the cycle of child abuse and family violence across Inuit Nunangat.

Pauktuutit told the National Inquiry into Missing and Murdered Indigenous Women and Girls on Tuesday, Dec. 11, that the root causes of that abuse and violence must be addressed, and called for Inuit-specific services to treat victims and perpetrators.

Pauktuutit had standing at the national inquiry for its duration on behalf of four other Inuit associations: AnanauKatiget Tumingit (Inuit Women of Labrador), Saturviit Inuit Women’s Association of Nunavik, the Ottawa Inuit Children’s Centre and the Manitoba Inuit Association.

Its president, Rebecca Kudloo, made the group’s final submission in Ottawa on Dec. 11, presenting seven recommendations to commissioners based on Inuit testimony made to the inquiry over its two-year mandate.

“Home should be a place of safety, of love and family and refuge, but for so many years, we have known that home is the most dangerous place for an Inuk woman and her children,” Kudloo said.

“This must change, so that means we must change. The cycle of abuse and violence against Inuit women has to stop. We can’t wait any longer.”

To accomplish that, Kudloo said all 51 communities that make up the Inuit homeland need safe shelters for women and children, along with Inuit-focused counselling and healing programs for both victims and their abusers.

More broadly, Pauktuutit called for the elimination of poverty from the North, and for more housing to ease the burden on overcrowded homes and for the promotion of healthy relationships.

From the very early days on the national inquiry, Pauktuutit has urged commissioners to ensure the process considered the lived experience of Inuit and how that differs from that of First Nations and Métis women.

The commission held public hearings in Nunavut earlier this year in addition to Inuit-specific sessions at its hearings in some southern cities and an institutional hearing in Iqaluit this past fall.

To better understand that reality, Pauktuutit also recommended the federal government, specifically, Statistics Canada, disaggregate its data on Indigenous communities to ensure it has a clearer picture of issues facing Inuit in Canada.

Among its other recommendations:

• Offer incentives to southern hires who come to work for police forces serving Inuit communities to stay for a minimum of five years.

• Make cultural integration training mandatory for anyone working in the justice and corrections system.

• Increase the number of circuit court dates in Inuit communities.

• Ensure Inuit children who are taken into the care of youth protection services are placed with other Inuit families.

“The cycle of child abuse that contributes to violence … must be broken, and we all have work to do,” Kudloo told commissioners Dec. 11.

“We are offering our help.”

Following these final submissions this week, the national inquiry will have until the end of April 2019 to deliver its report and recommendations to the Trudeau government.

Once the report is made public, Pauktuutit called on the federal, provincial and territorial governments to submit their own action plans within a year, outlining how they intend to implement those recommendations.

Pauktuutit also recommended each province and territory establish its own office of the Indigenous Ombudsman to serve as a watchdog through that process.

“This process was hard for families,” Kudloo said. “But we want you to know that we heard you.”

You can read Pauktuutit’s full submission and detail recommendations here.

Obed said he wanted to see wants a first ministers’ meeting on the inquiry’s recommendations.