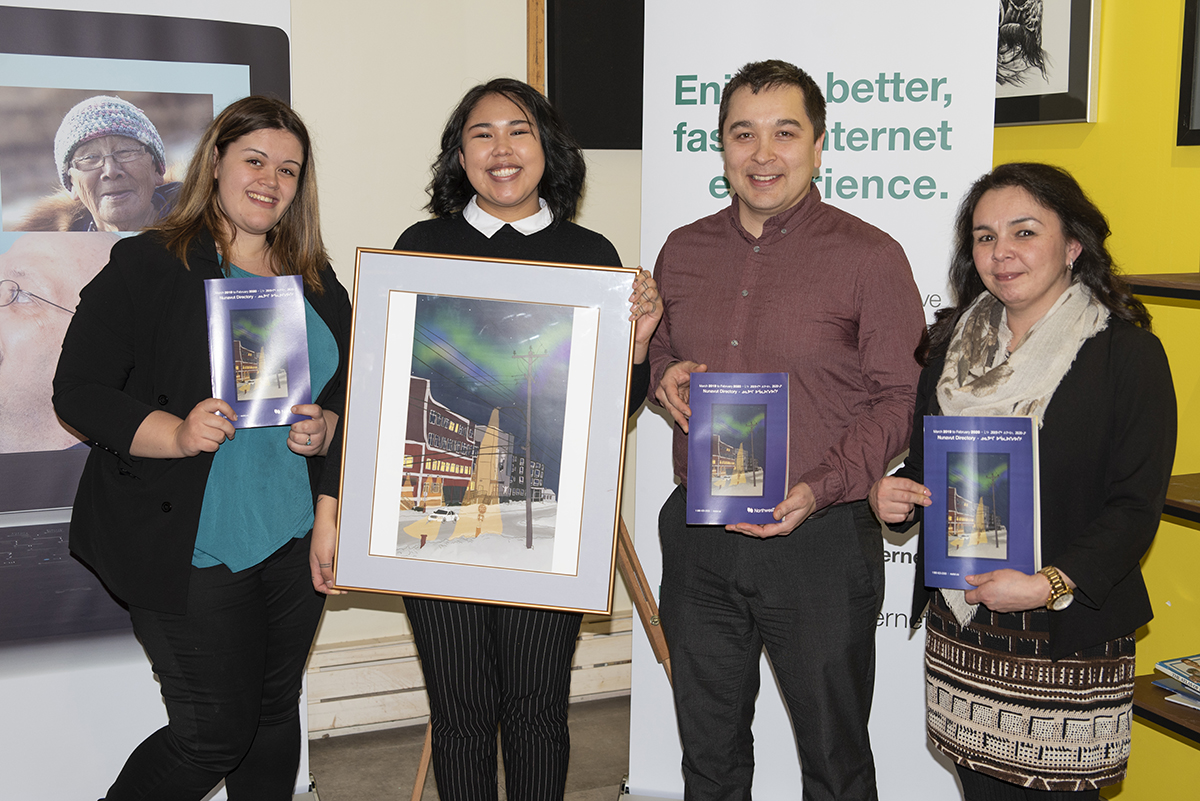 Dayle Kubluitok’s digital artwork, Four Corners, inspired by the well-known intersection in downtown Iqaluit, was officially unveiled March 8 in Iqaluit as the cover image of Northwestel’s 2019/20 phone directory for Nunavut.

For more than 30 years, Northwestel has invited northern artists to submit their work for a chance to appear on its regional phone directory covers.

Northwestel selects the winners in consultation with the local arts community. Each regional winner receives $3,000. 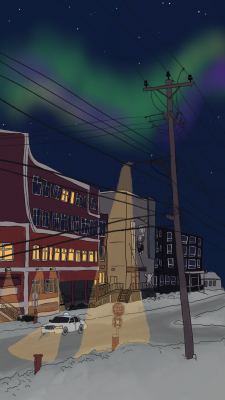 Dayle Kubluitok’s digital artwork Four Corners, inspired by the intersection in downtown Iqaluit, is featured on the cover of Northwestel’s new phone book for Nunavut.

A first-time entrant, Kubluitok recreated the downtown Iqaluit intersection by using her smartphone to digitally sketch the scene, then added colour and shadows using a graphic design tablet at home.

“I basically do all my art on my phone,” Kubluitok said in a release on her win. “At the time, I was waiting for a cab at the bank, so I sketched out the landscape on my phone. The northern lights were out, and I just started off with the lamp post because I thought it looked really neat. Later that night I decided to finish it while hanging out with my friends.”

Originally from Rankin Inlet, Kubluitok briefly attended art school at Centennial College in Toronto, but returned to Nunavut, due to the high cost of education, she said.

“After I posted Four Corners to Facebook, it kinda blew up,” she said. “Then when I found I won, I was overwhelmed. I feel really confident now and I’ve been doing more and more art. I started getting requests for graphic design and illustration and I did some back covers of magazines. It’s all been hard work, but I’m happy where I’m at right now.”

Northwestel President Curtis Shaw said he is excited to see new types of artwork coming from a new generation of northern artists.

“Dayle’s digital rendering of this well-known Iqaluit location shows how the next generation of northern artists can use new technology to effectively capture our unique northern landscape,” he said in the release. “Northwestel is proud to share Dayle’s artwork with everyone in Nunavut and to help support her development as a professional artist.”

The new 2019/20 directories will be available at pick-up locations throughout Nunavut in the coming weeks.

From now until April 26, last year’s phone directories can be recycled to support local students through Northwestel’s Directory Recycling Program.

Each year, northern students can collect these old telephone directories for recycling to earn money from Northwestel to help fund school activities. Details about the program, including a list of participating schools, are available here.