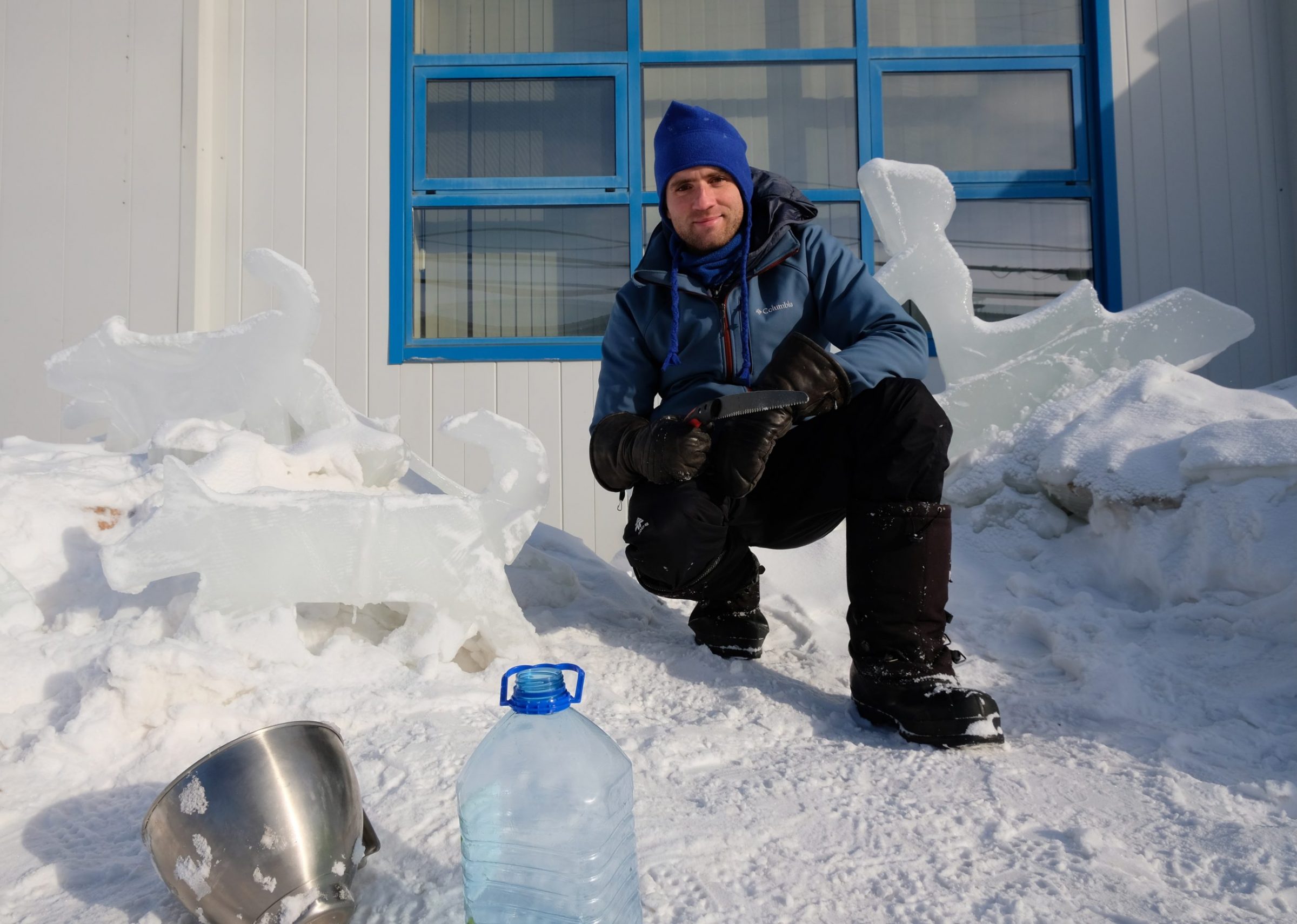 Iqaluit resident Denzil Barkley is the carver behind ice sculptures seen around the city over the past two winters. (Photo by Mélanie Ritchot)

Iqalummiut have no doubt noticed ice sculptures appearing around town throughout the winter, such as a dogsled team outside of the post office or a kangaroo welcoming clients into the thrift store.

Denzil Barkley, the man behind the sculptures, works as a trades instructor at Iqaluit’s Frontier College during the day. At night, he freezes blocks of ice, layer by layer, then uses an electric saw and handsaw to sculpt them into the ice creatures.

Barkley started teaching himself to sculpt ice with a bit of research on YouTube and trial and error.

“It’s something that I can get kind of really engaged in, I can spend a couple hours on it and it doesn’t feel like I’m working,” he said.

One thing that drew him to ice carving was how forgiving ice is as a material to work with.

“It’s a lot easier than any other kind of carving because you can repair it,” he said.

“If you make a stone carving and it breaks, you can glue it back together, but it’s not going to be as good as it once was.”

With the dogsled team sculptures outside of the post office, for example, Barkley was able to repair one of the dog’s tails that had broken off in under 15 minutes.

And if there are mistakes in the carvings, they won’t be around forever. The sculptures typically melt in a matter of weeks, depending on the weather. 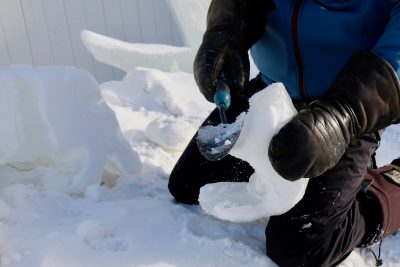 Denzil Barkley repairs the tail of a sled dog made of ice with water and snow on Friday. (Photo by Mélanie Ritchot)

To make the sculpture of the dogsled team, Barkley sculpted three sled dogs, then sawed each of them in half lengthwise to create six dogs.

Barkley carves the ice blocks at home, then, at night, he tows them to their locations on a qamutik with a snowmobile, where they are displayed as long as the weather allows.

“Transporting is one of the more tricky components,” Barkley explained.

When he tried to move the kangaroo sculpture to the thrift store, for example, the first bump on the snowmobile trail was as far as he got.

“I lost a third of the sculpture,” he said. “Then I just brought all the pieces back home and repaired it.”

Between figuring out what thickness of ice is best — not too heavy to tow but not too thin and fragile — Barkley has figured out a process that works for him.

He has also tried things like adding colours to the ice with food colouring mixed in with the water, but this makes the sculptures melt away faster, with the colours drawing in heat from the sunlight.

Next year, he said he wants to try gathering blocks of ice from lakes when they freeze to the right thickness, instead of having to freeze the blocks himself, which takes about three days.

This late in the season, ice on the lakes around town is too thick to cut through.

In recent weeks, Barkley has been venturing into doing more commissioned sculptures around town and has received a good response from local businesses — like a request to sculpt an ice marijuana leaf outside of the cannabis store — he said.

“I want to share them with more people, but I’m not always sure where to put them and I’m looking for other people’s ideas as well,” he said.