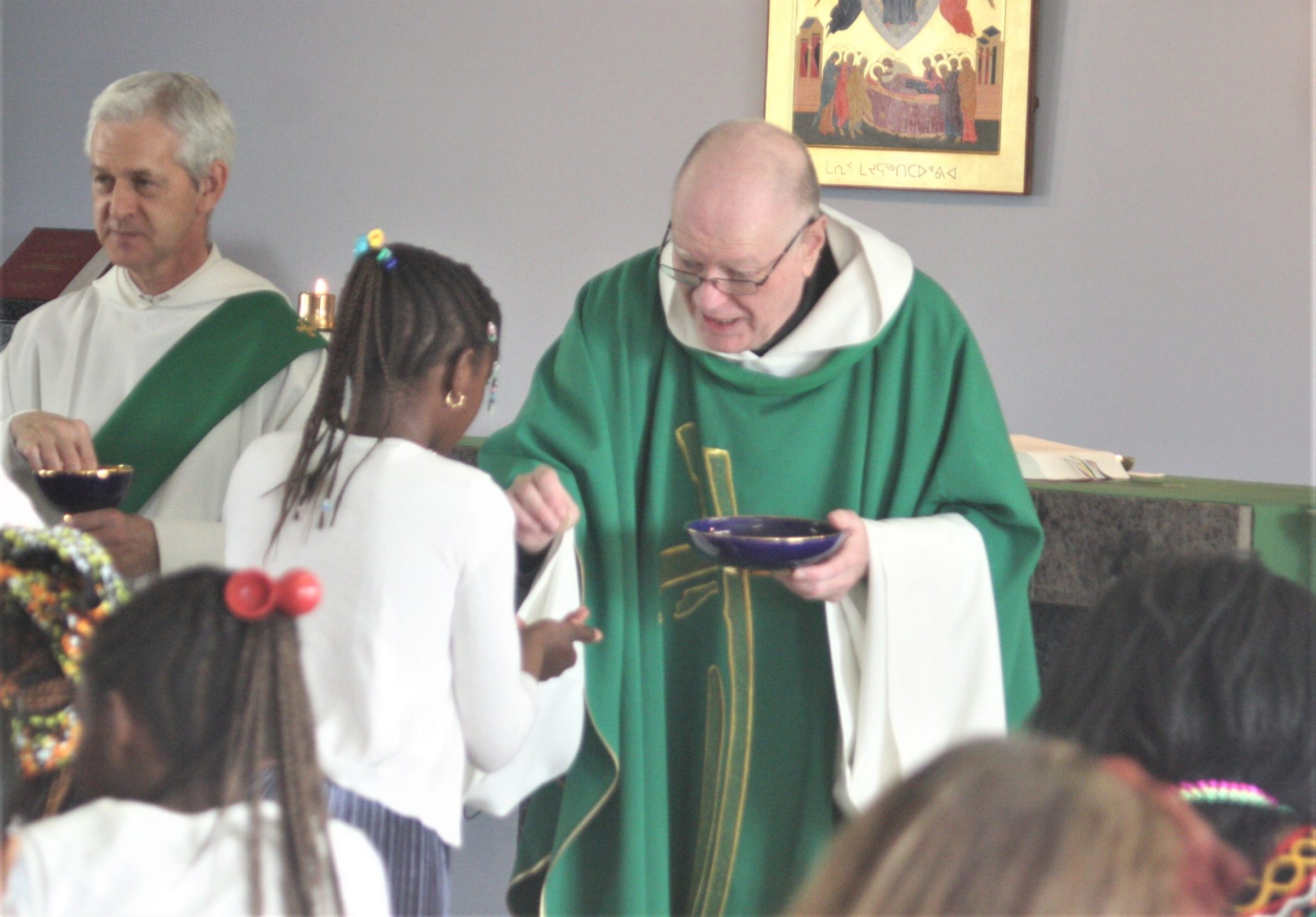 Rev. Daniel Perreault, the pastor at Our Lady of the Assumption Roman Catholic church in Iqaluit, gives the eucharist to a young parishioner Sunday. (Photo by Corey Larocque)

While Pope Francis was airborne Sunday morning — en route to Canada to make an historic apology —his flock in Iqaluit was getting a sermon on forgiveness.

“We’re invited to forgive those who have sinned against us, those who offend us,” said Rev. Daniel Perreault, the pastor at Our Lady of the Assumption Roman Catholic church. “I believe, actually it’s the most difficult thing to do.”

Before Sunday’s mass, Father Perreault said he hadn’t tailored his prayers or his homily to include a message about the Pope’s visit. It was to focus on a general reading of scripture, like every week, he said.

But his lesson was a phrase-by-phrase examination of the Lord’s Prayer, which Perreault noted has been said by Christians in “all nations from the time of Jesus to today.”

“We feel this in our flesh. How can I forgive this person, this person who hates me?”

But forgiveness starts with a person’s conscious decision to grant it, he said.

“Because I believe in Christ, I decide to forgive … I forgive the one that hates me.”

Later, he encouraged his congregation to say the Lord’s Prayer with Pope Francis on Friday when the head of the Roman Catholic Church visits Iqaluit, the final stop of the Pope’s six-day visit to Canada.

“If we do not forgive, we are telling God not to forgive us,” Perreault said.

Pope Francis arrived in Edmonton late Sunday morning. He came to Canada to apologize for the church’s role in Canada’s residential school system.

In the 1800s and 1900s, the federal government tried to separate Indigenous Peoples from their language and culture by removing children from their families and sending them to church-run residential schools.

Many of the children suffered physical and sexual abuse at the hands of clergy who worked there. Last year, Canadians began coming to terms with what it meant that unmarked graves are located near many of the former schools.

The Iqaluit priest predicted Francis “will not make a miracle” by repairing the damage the church did to generations of Indigenous Peoples, but said the apology could “start a small bridge” that will grow.

Catholics in Iqaluit say they’re excited that their Holy Father is coming to the capital of Nunavut.

When Perreault asked for a show of hands of how many parishioners plan to attend the Pope’s community event Friday afternoon outside Nakasuk Elementary School, close to every one of the approximately 75 people at Sunday’s mass signalled they will be there.

“We are humbled that, even in his penance, he is coming to make an apology and [help] reconciliation with the Nunavummiut,” said Norma Ablay, who has attended Our Lady of the Assumption for nearly 10 years.

Ablay met Francis in Rome in 2017, when 13 members of the Iqaluit parish made a pilgrimage to the Vatican. Meeting him brought Ablay, who serves as an assistant at the church and a bookkeeper, to tears.

“It’s almost like the Holy Spirit is coming in to me,” she said.

Rodney Sulcan, a deacon at the church, said Francis’ visit is “an important event” to Catholics.

“They’re looking forward to meeting the Pope,” he said. “The community welcomes that because it’s part of the healing process [for Indigenous Peoples.]”

Merci Vergara, who has worshipped at Iqaluit’s Catholic church for 10 years, said she’s “excited” that Francis is coming to town, but wonders why he’s only spending the afternoon in Nunavut’s capital but about three days in each of Edmonton and Quebec City.

“I wish he would spend a little bit more — just a few minutes more. We don’t get enough time to speak to him.”

With the papal visit less than a week away, there are hardly any indications that a world leader — with his official entourage, security personnel and dozens of reporters in tow — is on his way.

The church’s regular mass schedule has been altered on Thursday and Friday because of the visit.

The City of Iqaluit issued a road-closure notice last week. But there are few signs of preparations for a stage, sound system or portable washrooms outside the Nakasuk school.

On Saturday night, a group of young people played basketball in the open area where thousands of people are expected to meet the Pope.

When Perreault asked his parishioners who planned to attend on Friday, there was some murmuring among the flock, some of whom sounded surprised the papal visit is so soon.