“I’m rapping to talk about real issues, about the things I grew up with” 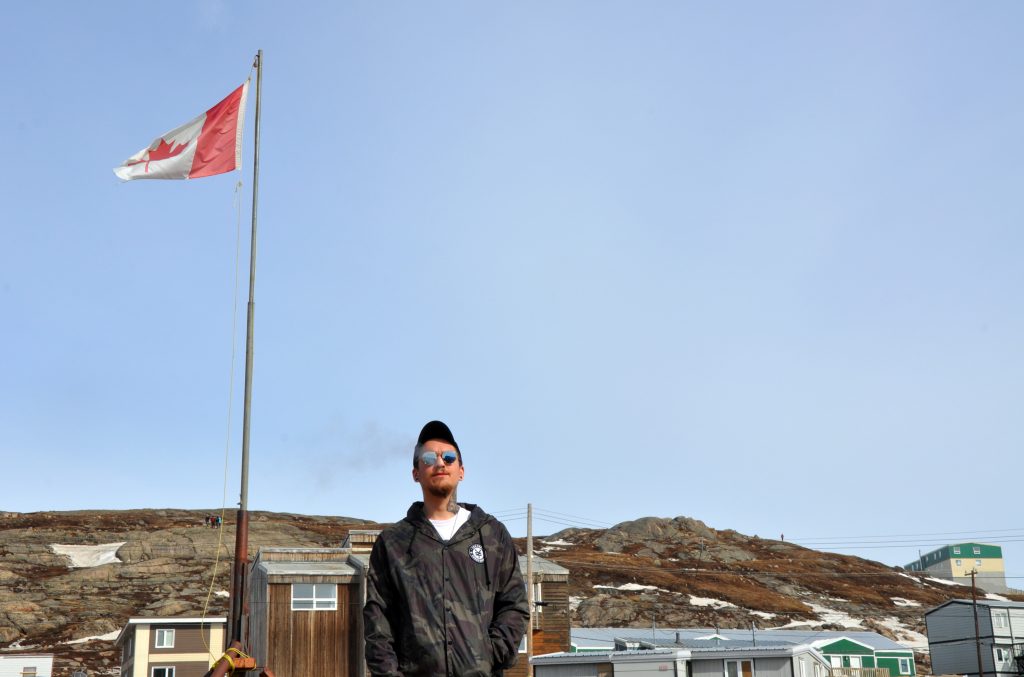 You can call him Mister.

The Iqaluit rapper, who performs as FXCKMR, is on stage at Floechella, Nunavut Music Week’s outdoor venue on the sea ice, where fans dance along and move their lips to his songs.

The 21-year-old hip hop artist hasn’t been a mainstream fixture in Nunavut’s music scene, but he expects that to change soon.

“I’m in it all the way now,” Cloutier-Ellsworth laughs. “I don’t want to ever find another job again.”

In just a few short months, FXCKMR’s career has quickly taken off.

This spring, he signed on to Nunavut-based label Aakuluk Music, which he said has been a game changer, offering Cloutier-Ellsworth financial support to travel to a Montreal studio to record, as well as publicity and booking support.

Then FXCKMR was invited to take part in Nunavut Music Week in April, playing live shows at its Floechella event and snagging an interview with CBC host Tom Power on the arts and culture program Q.

“That was crazy,” he said. “It was so cool to have the community there, to get that feedback.”

Now FXCKMR has a 10-track album in the works, due out later this year, and an upcoming gig in Toronto—one he hopes is the first of many this summer.

Cloutier-Ellsworth was born and raised in Iqaluit, the son of television producer Sylvia Cloutier and cinematographer Qajaaq Ellsworth, but also spent time in Kuujjuaq, Ottawa and Montreal.

He recalls hitting a creative period as a student at Inuksuk high school, when he started collaborating with fellow students Kunuk Kotierk, Brandon Ashley and Thomas Lambe, who produced music under the moniker the 307 Gang.

As the group split up to go to college and pursue other projects, Cloutier-Ellsworth kept writing and producing beats.

His lyrics have explored suicide, poverty, mental health and food insecurity in Nunavut.

“I’ve just tried to keep it real,” he said. “I’m not just rapping to rap, I’m rapping to talk about real issues, about the things I grew up with.”

It’s hard to go to sleep, my mind is defeated
I been fighting myself with the darkest of demons
I ain’t gon’ let myself die til’ I got what I needed
and everybody around me get lost in their dreams

The content of his upcoming album is equally dark, he warns.

“It’s a little peek into what it’s like to be in the dark side of my mind. It’s meant to throw you off guard and creep you out.”

The tracks he has put out have an addictive and ambient quality, and Ellsworth-Cloutier’s smooth delivery as an MC suggests experience beyond his 21 years.

Today, Cloutier-Ellsworth splits his time between Iqaluit and Montreal, where both his mom and MakeWay Studios are based.

Though Nunavut has a small and growing hip hop scene, Cloutier-Ellsworth said it’s yet to hit the mainstream, which makes it hard to get gigs.

“It’s still pretty quiet,” he said. “It’s bubbling up, but there’s still no consistent platform for us.”

FXCKMR is set to play a show in Toronto June 12, opening for The Jerry Cans at the city’s North by Northeast music festival.

He’s also set to release his single, titled Pretty Muthaf**ka with a Face Tattoo, ahead of his album, which is due out later this summer.