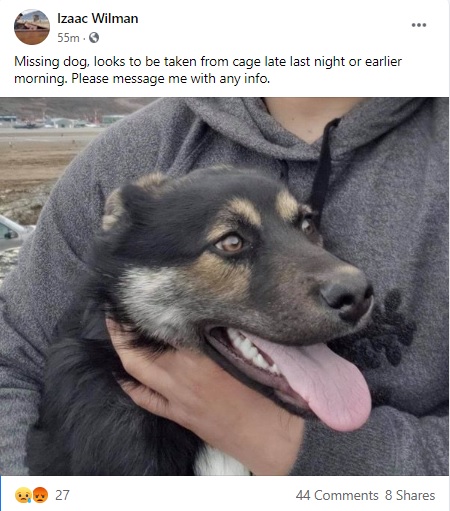 An Iqaluit musher posted this photo of his missing dog on Facebook early today. He later discovered the animal hanging in a sea can by the beach.

Iqaluit police are investigating the brutal killing of a dog in the city overnight.

The dog was discovered dead early July 31 at Iqaluit’s beach near the sealift off-loading area, RCMP said in a release the same day.

The circumstances around the animal’s death are suspicious, the RCMP said, and police are asking any witnesses to come forward.

The owner reported that he has secured the six-month-old Husky/Shepherd mix in a kennel with the rest of the dog team near the creek, just west of the Iqaluit Beer and Wine store,  the previous evening around 7:00 p.m.

“Missing dog, looks to be taken from cage late last night or earlier morning,” he wrote. “Please message me with any info.”

Later in the comment thread, Wilman posted a graphic image of his dog, dead and strung up against a wooden post in a sea can. The animal appeared to have been hung.

“Iqaluit RCMP have assured me that the investigation into the dog’s murder will be [to] the fullest extent,” Iqaluit mayor Kenny Bell tweeted this morning.

“Please let them do their job and let’s hope for a fast and swift capture of this individual.”

The RCMP did not respond to Nunatsiaq News’ request for information before this story went to press.

Many Iqalungmiut expressed fear and disgust over the animal’s death after seeing the image posted to social media. The photo has since been removed.

Former Iqaluit mayor Madeleine Redfern has long warned about safety issues at the city’s beach, which has been the scene of vandalism, arson, suicides and other deaths in recent years.

“Enough is enough,” Redfern wrote on social media. “The beach is a place of violence and ugliness.”