This year’s theme was “Around the World” 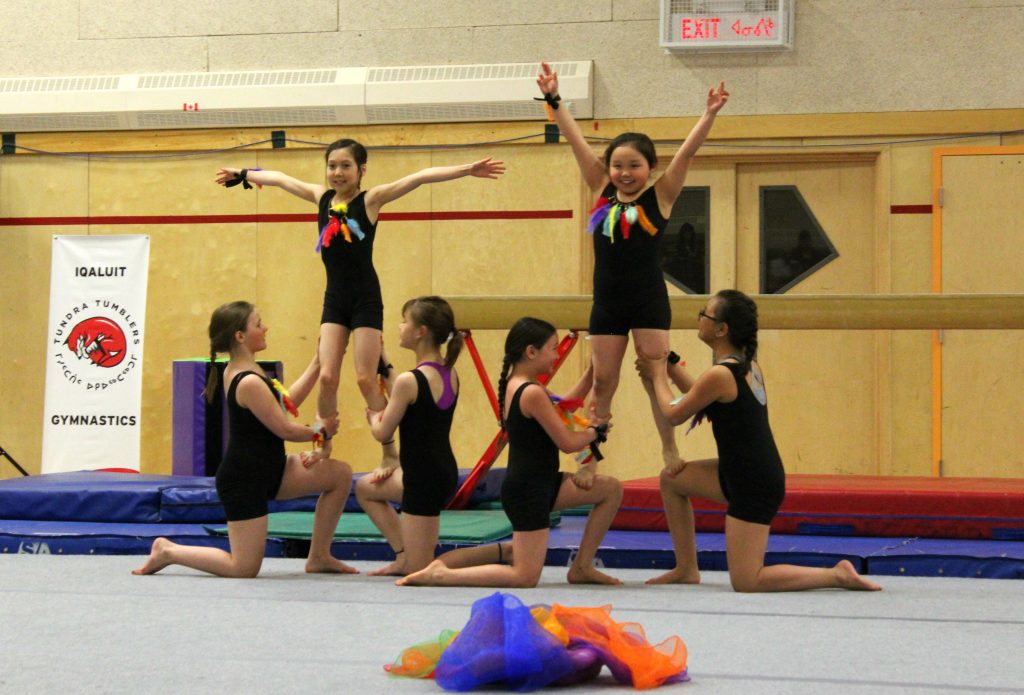 The gymnasium at Aqsarniit Middle School in Iqaluit took a trip around the world last Saturday afternoon when the Iqaluit Tundra Tumblers gymnastics club presented their annual showcase to family and friends.

The show featured 50 gymnasts performing a series of six different routines to music tracks that complemented this year’s theme, “Around the World.”

The audience was transported to France with a routine choreographed to Edith Piaf’s “La vie en rose,” followed by a number that wove colourful scarves with movement to the Swahili song “Baba Yetu.”

One group even performed to the late 19th century Scottish tune “Skye Boat Song,” complete with kilts and high kicks.

Katherine Canil, lead coach of the Tumblers, said she started the annual showcases three years ago because official competitions were too far away for the club to attend.

“We try to get every kid involved,” Canil said. “It’s hard work, but it is so exciting to see those kids so excited to get out there in their costumes.”

The club started shortly after 2002 when gymnastics equipment was left over from the Arctic Winter Games in Iqaluit. The equipment was eventually moved to Aqsarniit, where the club now holds regular practices.

The club, which trains 150 to 200 kids over the year, is coached by a combination of parents and people with gymnastics experience.

The Tumblers teach a variety of programs, from parent-and-tot classes to introductory, advanced, and teen and adult gymnastics. They train weekly, with the advanced group sometimes training several times per week.

For those who feel like gymnastics might not be for them, the group offers something called “Gymna Ninja.” This program incorporates elements of parkour, CrossFit and ninja warrior–style moves. Gymna Ninja alone has 45 to 50 kids participating each week.

“It uses our gymnastics equipment in a way for kids that aren’t particularly interested in pointing their toes or doing a handstand,” Canil said.

Saturday’s show opened with the Gymna Ninja group performing an impressive display of flips, rolls and jumps around a circuit of gymnastics equipment to the Jerry Cans’ “Mamaqtuq.”

Canil said one of the club’s goals is to get as many kids involved as possible.

“Gymnastics brings a lot of goal-setting. It’s great for social interactions, it’s great for fitness, and it can be a lot of fun. So we try to focus on those aims in our club every year and I think we’ve been really successful, “ Canil said.

Canil said for her, the highlight of the show is seeing the excitement on the athletes’ faces.

“When you bring out even just one element of the costume, it elevates them. It’s a truly wonderful thing to see,” she said.

Excitement was certainly on full display Saturday afternoon, along with a lot of talent and hard work.

The Iqaluit Tundra Tumblers will host their annual general meeting May 14 at 7:30 p.m. at École des Trois-Soleils.