Katimavik is coming back to Iqaluit 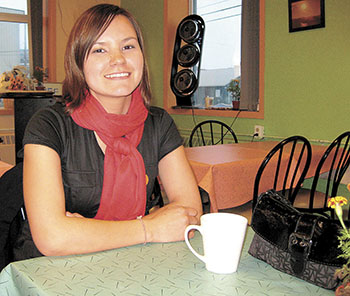 Patricia Peyton is excited to see the national Katimavik youth program’s returning to Iqaluit. The 23-year-old volunteered in 100 Mile House, B.C., Timmins, Ont., and Trois Pistoles, Que., when she took part in Katimavik in 2006. (PHOTO BY JOHN BIRD)

Katimavik, a national program for youth that takes its name from an Inuktitut word for “meeting place,” is returning to Nunavut this fall after a long absence.

And Patricia Peyton couldn’t be happier.

Peyton, originally from Pangnirtung but now living in Iqaluit and working for the Nunavut government, did a nine-month stint with Katimavik back in 2006-07 that took her to 100 Mile House, B.C., Timmins, Ont., and Trois Pistoles, Que.

It was a winning combination for her, and she sees the youth exposure program’s return to Nunavut as a win-win-win option too — for young people in the territory and in southern Canada, and for the territory itself.

Senator Jacques Hébert and Prime Minister Pierre Trudeau founded Katimavik in 1977. By the 1985-86 season, when the Progressive Conservative government of the day cancelled it, the program was putting 4,000 to 5,000 youth into the field each year.

The Liberals revived Katimavik in 1994 with just 100 participants. It’s been growing slowly ever since, and now, with about 1,000 participants a year, it’s finally made its way back to Nunavut.

For her Katimavik experience, Peyton joined a group of 10 other participants from across the country, plus an adult facilitator, to spend three months in each of three communities, learning to live together and manage a household, and doing volunteer work with partner organizations in the community.

A new twist will see the organization starting six-month programs this year (in addition to the nine-month “classic,”) that will still take young people, aged 17 to 21, to three communities, but for two months at a time instead of three.

That means Iqaluit will have six groups of 11 youth cycling through the community in the course of a year, with each group staying two months and doing volunteer work with a variety of local organizations while they are here.

Possible benefits should include:

A recent study of the social and economic impact of the Katimavik program found that Katimavik spent an average of $65,000 a year per community, and that partners estimated the volunteer contributions to each community averaged nearly $132,000 a year.

Those numbers will probably be higher for Nunavut, given the higher cost of living.

Becky Kilabuk, one of two people running the youth department for the Qikiqtani Inuit Association, is gung ho about having the help of a Katimavik volunteer when the first team arrives this fall.

“And it will be good having people from the south coming here and learning about us,” she added.

Kilabuk does raise a few red flags, though. She said it’s important to know what you want to accomplish with the program, to find the right ways to go about making that happen, and to monitor it to make sure the participants are having the right impact.

If the Iqaluit experience goes well, national Katimavik executive director Jean-Guy Bigeau, in Iqaluit for a board meeting and to meet with potential partners, said he hopes to expand the program to other Nunavut communities in the coming years.

In order to share the wealth, Katimavik has a policy of not remaining in the same community for more than three years.

Stable government funding remains a challenge, and the organization is looking for more non-governmental sources of support.

Even though she had already spent two years in the Ottawa-based Nunavut Sivuniksavut school program, Peyton found some of her biggest Katimavik challenges included sharing a bedroom with three other young women; taking her turn meal planning, shopping, cooking and cleaning for the entire household of 12, and learning to work out relationship problems at weekly meetings.

“It was like making a new family,” she said. Peyton still keeps in touch with some of her Katimavik friends, and will visit one young woman from Quebec this summer.

Katimavik tries to balance every group geographically and by language and gender, she said. Her group included five anglophones from British Columbia in the west to Prince Edward Island in the east, two Inuit from Nunavut and four francophone Québécois.

Her volunteer experiences included providing extra help for students who were falling behind in a 100 Mile House primary school, supporting an after-school program for children at risk at the Native Friendship Centre in Timmins, and, her least favourite, working at a recycling plant in Trois Pistoles.

“You learn a lot about teamwork, adaptability, conflict resolution,” she said. “You step up to your abilities and find out where you stand as a person. You learn from your mistakes, and grow from them.”

“Katimavik helped me to move out of my comfort zone, and to be okay with that,” she added. “You need courage, but the program is there to help and guide you.

“It helped me evolve to be a stronger person.”