Diamond will be fully paid for by the Jays Care Foundation, says hamlet CAO 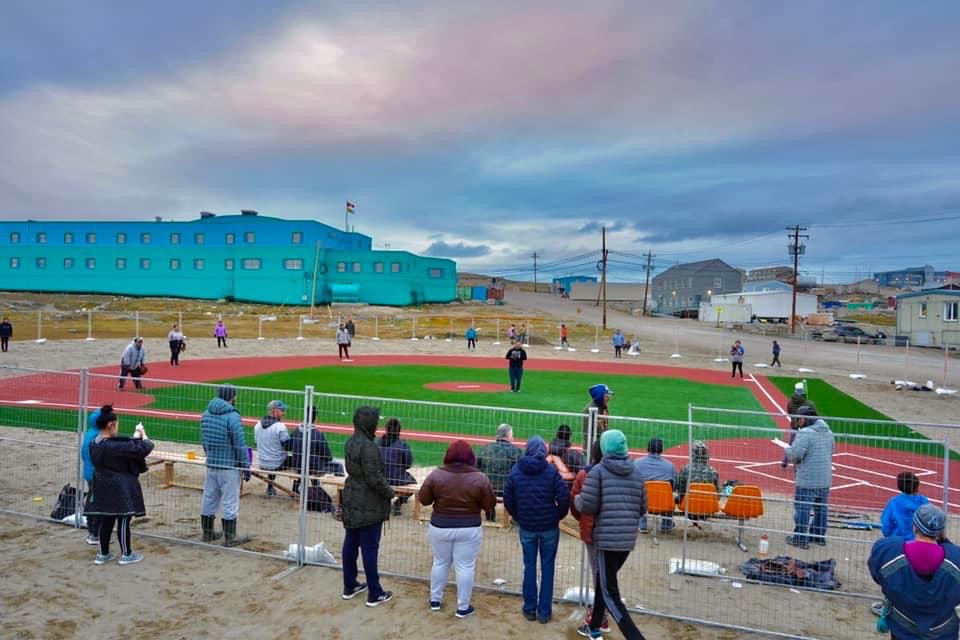 The Hamlet of Pond Inlet won against the Government of Nunavut in slo-pitch tournament play Tuesday evening on the community’s newly installed diamond. (Photo courtesy of Dave Stockley)

Kids in Pond Inlet have taken to the community’s nearly complete baseball diamond, even as the hamlet aims to put some final touches on it in the coming weeks.

Workers from the south travelled to the north Baffin Island community and installed the turf over the Aug. 13-14 weekend. In the two weeks that the turf has been laid out, senior administrative officer Dave Stockley said kids have been out playing ball.

“It’s a beautiful setup. The community, the kids — they just love it,” he said in an interview with Nunatsiaq News.

The diamond, which was supposed to be installed prior to the COVID-19 pandemic, includes artificial turf, a backstop, fences and bleachers next to the Community Hall.

The turf is installed with some temporary fencing around it, Stockley said.

Bleachers and a backstop will be put up over the next few weeks and a cover for the turf is planned to be delivered next year, he said.

Stockley said the $90,000 cost of the diamond will be covered by the Jays Care Foundation in exchange for the Toronto Blue Jays logo being displayed on the field.

In 2021, the hamlet bought softballs and baseball bats in preparation of the field being installed.

Five teams participated in a tournament this week, from the Government of Nunavut, the hamlet, elementary school, high school and Nunavut Housing Corp.

In the future when the diamond is complete, the Pond Inlet recreation department will organize more team play. For now, it’s mostly open for the community’s children to enjoy.