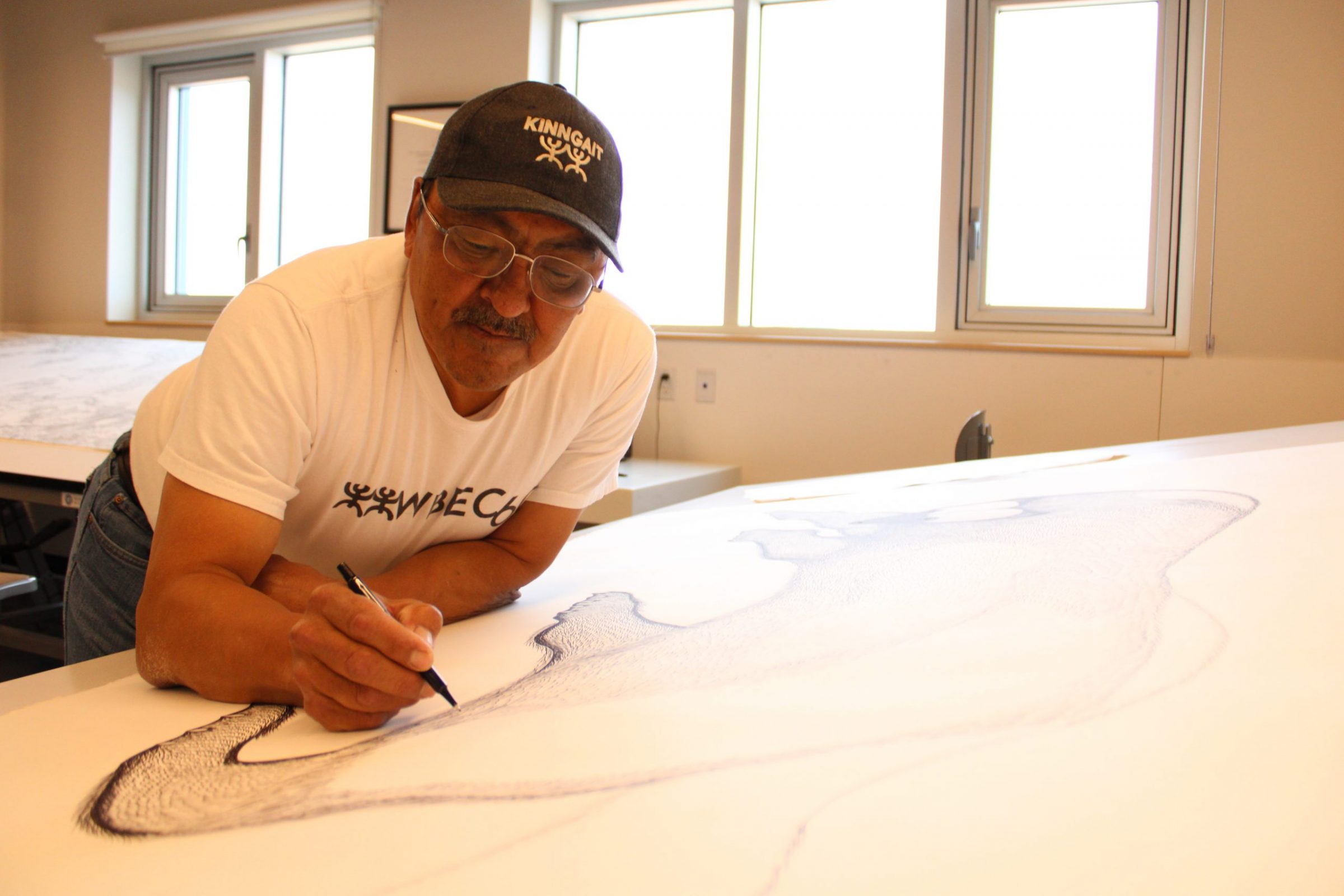 Artist Quvianaqtuk Pudlat works on his drawing of a wolverine at the Kinngait Art Studios on Sept. 7. (Photo by David Venn)

KINNGAIT — At one end of the Kenojuak Cultural Centre and Print Shop, artist Quvianaqtuk Pudlat works on a drawing of a wolverine, with hundreds of small black lines swiped on the paper with a felt pen to serve as its fur.

At the other end, master printer Niveaksie Quvianaqtuliaq sweats over a work of art as he transfers it into lithography prints, most of which will be sent to the studios’ distributor in Toronto, Dorset Fine Arts.

It’s Sept. 7, a typical day at the studio. The two artists are creating art for West Baffin Eskimo Co-operative’s Kinngait Studios, which has been in operation for more than 50 years. Next month, the co-op will release its 62nd Cape Dorset Annual Print Collection, which includes 50 copies of 32 prints by 13 artists.

“Cape Dorset is known as the capital city of the art world in Canada,” said assistant studio manager Joemee Takpaungai during a recent interview with Nunatsiaq News. “It’s pretty well known for its art because it’s been like that for 60-odd years.”

Pudlat, who chose to draw a wolverine because he says it’s a “loner,” takes breaks between strokes to gaze at his community through the window and listen to the sounds on the radio.

He began drawing four years ago as a source of income, starting “kind of late,” he admits. Yet his drawings are regularly featured in the annual print collection produced by the studio.

His inspiration is to show people what kind of animals are in the North.

He’s in the studio every week, Monday to Friday. Pudlat’s print in this year’s collection is called Sparring Narwhals and depicts two narwhals curling their bodies against the edge of the page with their tusks crossing.

It was printed by Quvianaqtuliaq, a master printer who’s been with the studio for 31 years.

Quvianaqtuliaq was a dental assistant, assistant teacher, carpentry assistant, store clerk, and garbage picker before starting his career working with the studio 31 years ago. His favourite part of the job is working with artists.

“People say, ‘Oh how do you like to work with the famous [artists]?’ It’s always good and we have a good time,” he said.

He says he was set to do more training in Albuquerque, New Mexico, in 2020, but it was cancelled because of the COVID-19 pandemic.

His younger brother, Nujalia Quvianaqtuliaq, is learning the printmaking process from him. In this year’s collection, he printed two drawings by Ningiukulu Teevee and one by Ooloosie Saila.

The pieces of art featured in this collection, Takpaungai said, were submitted between September 2020 and June 2021.

“[The studio is] very well-known because of the people … we’re very dedicated people to sell art,” he said.