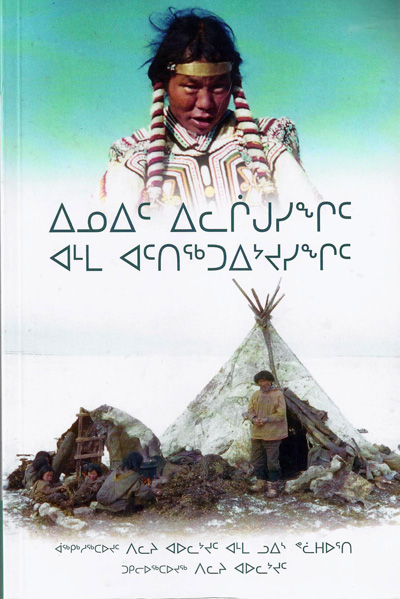 Elders from the Kivalliq region share their thoughts in the book Inuit Kinship and Naming Customs. (INHABIT MEDIA IMAGE)

Arviat elder Matilda Sulurayok’s sauniq, or namesake, is Kimaliarjuk, and it’s a name that’s played an important role in her life.

“My namesake, who was an old man, came to see me shortly after I was born,” she said in a 2012 interview, “and said that I would be able to do many things and be able to work on sealskins skillfully, because they are really useful for men and children.”

Sulurayok was of course too young to understand this as an infant, but it’s something she grew to understand and value in a time before Inuit lived in permanent houses, as she went on to become a talented seamstress.

This tradition of giving your child a namesake is an age-old Inuit practice that Sulurayok says must be maintained.

When she had her own daughter, Sulurayok called her Rose, but she also wanted to give her an Inuktitut name that would offer the child an easier life than her own parents had.

So Sulurayok named her daughter after her father, Issakiark, which she believed would relieve her daughter of all the hard work her father did to support his family.

“Back then he literally had nothing — no hunting equipment when we were living on the land,” Sulurayok explained, in the book Inuit Kinship and Naming Customs, published by Inhabit Media.

“The men used to hunt by dog teams, and sometimes by foot, for many miles. I could not stop thinking about how hard my father worked for us to survive, so I wanted to name him as my daughter. So I did.”

The problem today, said Sulurayok — and other Kivalliq elders interviewed for the book agree — is that the practice of naming Inuit babies after their elders as well as using kinship terms (tuq&urarniq) is quickly disappearing.

Naming is serious thing, and it’s a tradition that should continue, she said.

“I feel sorry for our young Inuit today because they have not been taught important issues and our traditions regarding naming children. It’s obvious that they are not sure who to ask when they have a child,” Sulurayok said.

“Today, some young people are not even contacting their parents when they have a baby. The elders of the family should decide who the child will be named after. It was always like that, and I still tend to use that rule of naming.”

When Inuit children are born and given only English names, or names that do not reflect the greater family or community, it creates a detachment from their culture, elders fear.

The relationship between a sauniriit (the person who receives a name) and their namesake is intimate and strong; without it, elder Leo Sr. Ahmak said, children cannot understand where they’ve come from or who their family is.

If and when a child is named after someone who is deceased, it also helps to ease the pain of having lost a loved one, Ahmak said.

“The agony and grieving cease a lot sooner once you have the name back in your family,” Ahmak said.

It’s equally important to tuq&uraq your relatives, he said, or address them with kinship terms.

“When I know I’m related to someone, I use the tuq&urausiq that was used for that namesake,” Ahmak said. “This relationship with my relatives has helped bring us closer together.

“It helps make me less afraid or hesitant to ask for anything from my relatives — I can just be openly friendly and ask questions if I don’t know, without being embarrassed about life issues.”

Kinship terms are very precise in Inuktitut, and specific to the sex and age of the name holder, who is addressing that person and sometimes even to the region.

For example, aniksaq is the term a female cousin would use to address her male cousin, but only in the South Baffin or Nunavik region.

Some elders fear the loss of the naming tradition may have even greater consequences.

“Today, people are naming their children after any one they like,” said elder James Konek. “This is one of the reasons why newborns die at an early age, because their parents are naming them after people they do not even know.”

Inhabit Media’s co-founder Louise Flaherty, who helped to edit Inuit Kinship and Naming Customs, said the concern over the loss of naming traditions goes beyond the Kivalliq region where the book’s elders were interviewed.

“What elders are saying is that it’s detached people from the connections they once had,” Flaherty said.

“That’s a concern everywhere, not just in the Kivalliq region,” she said. “For some, it goes deeper and it’s very spiritual.”

Flaherty said she was given nine names, which connect her to various families in Clyde River.

It’s an ancient practice which translates into a modern setting; at Flaherty’s workplace, she and a co-worker were named after a pair of brothers — Flaherty the younger — and so their relationship is akin to siblings.

“A lot of younger people are reading now so they can pick this book up and see how naming customs work,” she said. “’It’s there for them to use.”

Inuit Kinship and Naming Customs (Kivalliq) was published in 2013 by Inhabit Media.

A Baffin version of the book has just been published by Nunavut Arctic College.