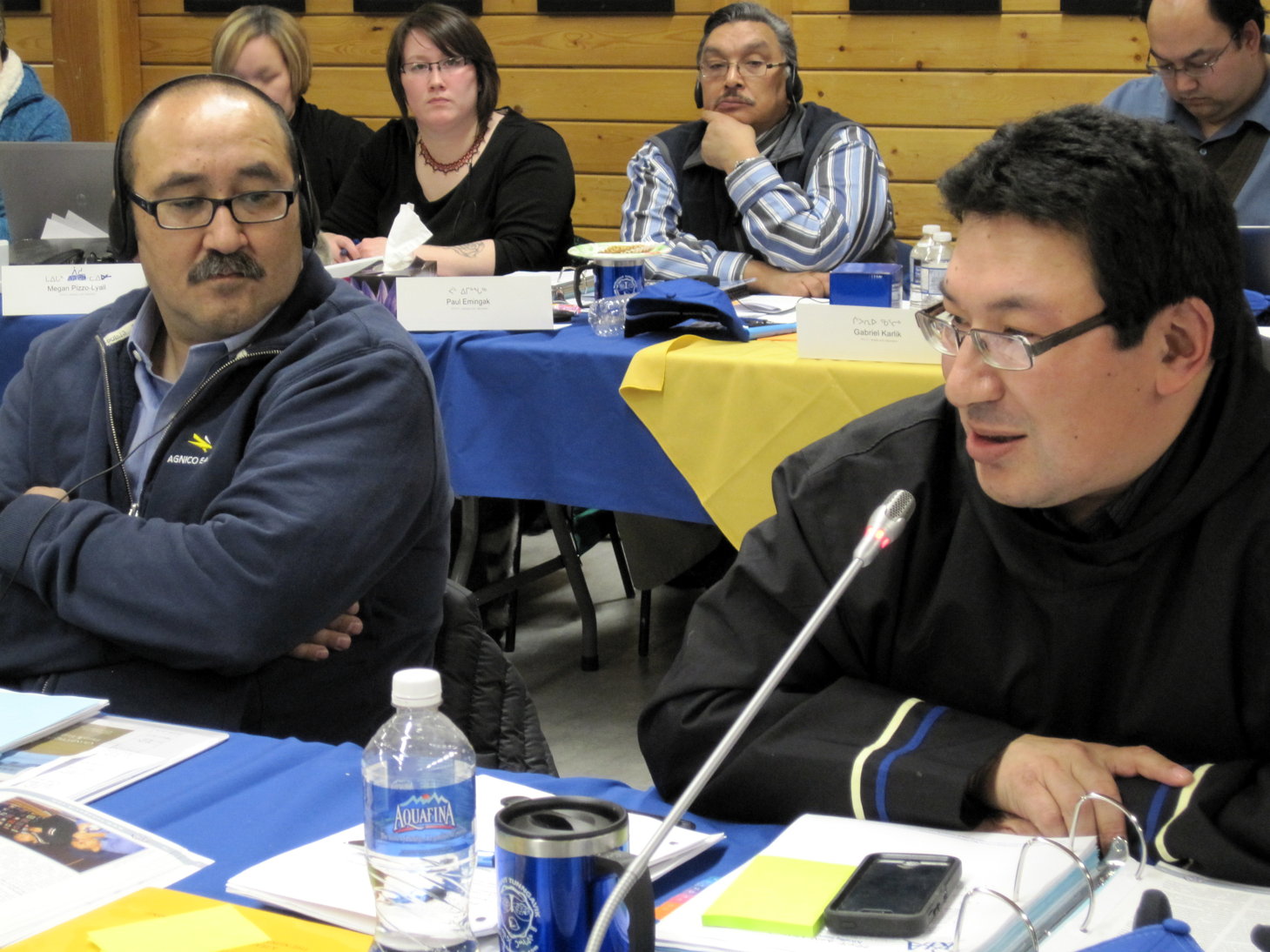 The Kivalliq Inuit Association has undertaken an overhaul of its bylaws and election policy, says President Kono Tattuinee, shown here on the left, with Levi Barnabas of the Qikiqtani Inuit Association, in 2019 in Cambridge Bay. (File photo)

The Kivalliq Inuit Association plans to delay its elections from this coming December until next April.

The postponement will allow for the development of election policies, procedures and material that reflect the KIA’s revised election policy and bylaws, KIA President Kono Tattuinee said in public letter this week.

The postponement will also allow newly eligible KIA beneficiaries to consider their candidacy for office, he said.

And the new policy will align with directives from Health Canada and the Government of Nunavut to minimize contact and large gatherings during the pandemic, he said.

The news about the postponed elections was circulated on Monday, Nov. 9, two days before the announcement that there was a positive COVID-19 case in Rankin Inlet, the Kivalliq region’s hub.

The move to postpone the elections, which would have taken place on Dec. 14, along with those of Nunavut Tunngavik Inc., came after the KIA started to revise its bylaws.

Draft revisions of the elections policy and bylaw were prepared, reviewed and amended through September and early October, Tattuinee said.

“We have now completed the final draft and will be presenting the revisions to the executive committee next week,” he said on Nov. 9.

That action is likely to be delayed because the KIA office is now closed and employees have been advised to stay home.

After the executive committee’s approval does take place, the plan is to call an AGM to approve the bylaws and revised elections policy, he said.

Following approval by the AGM delegates, the revised bylaws and elections policy will be filed with Nunavut Registrar of Societies, and brought into effect upon their approval, Tattuinee said.

The revisions will give the KIA authority to postpone the scheduled date of the December election to a date in April 2021.

The revisions will also give the KIA the authority to postpone future elections, if necessary, Tattuinee said.

The previous bylaws did not allow for any such deferral, “even in the event of Acts of God such as the current pandemic,” he said.

The bylaw changes also allow more Inuit from the Kivalliq to vote in KIA elections.

Previously, bylaws required that voters must be “usually resident” in the Kivalliq for a period of one year prior to an election.

“That meant that some students at Nunavut Sivuniksavut or university, people in long-term care in Winnipeg and their guardians, Kivallirmiut working in other regions and many others were unable to participate as voters or as candidates in our elections,” Tattuinee said.

Tattuinee said that when he campaigned in 2019, he promised to eliminate barriers to Kivallirmiut’s full participation in their birthright organization.

“I believe that KIA, like our communities, should be open and inclusive; a beneficiary stays a beneficiary wherever they reside.”