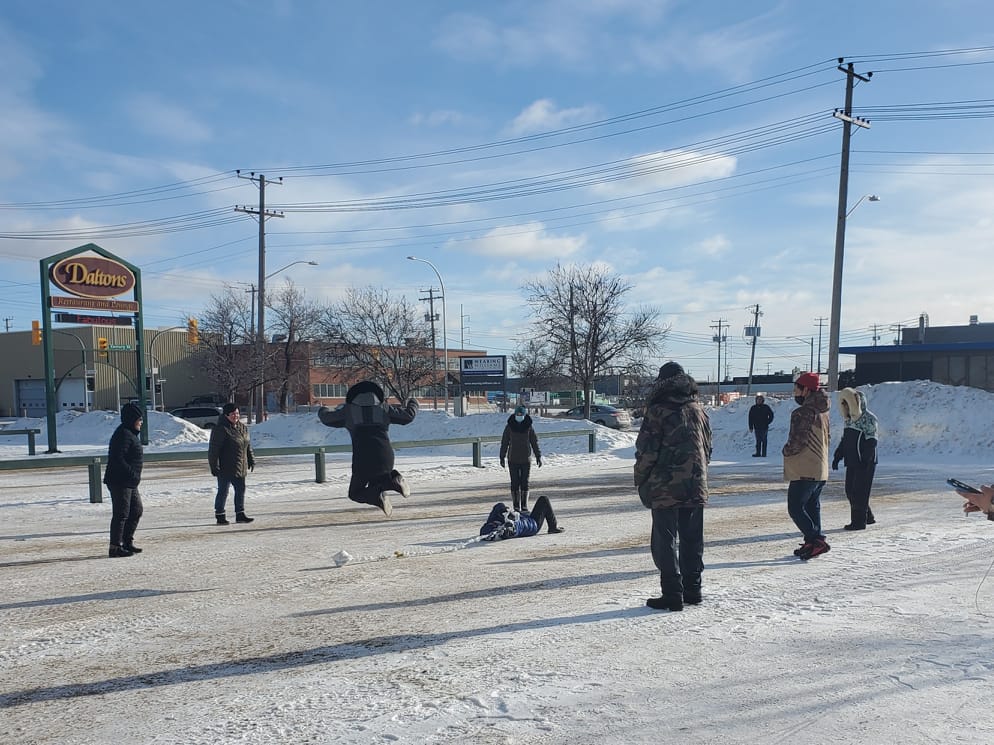 Nunavut residents staying in one of the territory’s isolation hubs in Winnipeg last week found ways to pass the time while following social distancing rules. Pictured here, the group plays a jump rope game made from plastic bags, using materials found in their hotel rooms. (Photo courtesy of Bridget Pingwartok)

A group of Nunavut residents square danced, tobogganed and played charades — all at a distance — last month to pass the time during isolation in a Winnipeg hotel.

“I was so not looking forward to isolating,” said Lali Pudlat, who organized the games from her fourth-floor Best Western Plus hotel room in Winnipeg.

But the activities “made it so much better,” she said.

Anyone flying into Nunavut must isolate for 14 days in one of four hubs run by the territorial government before entering the territory.

Pudlat says it all started when she asked some of her friends, who were also staying on the hotel’s fourth floor, if they wanted a challenge. From there, they started planning activities every day.

The original group of four participants quickly became a dozen, which is about half of the people allowed outside at one time, said Pudlat.

She said hotel staff and security had no problem with the group activities since social distancing rules were being followed and masks were being worn.

“Security would always come out and watch, they would even cheer us on,” she said, adding one security guard even joined in on the square dancing. 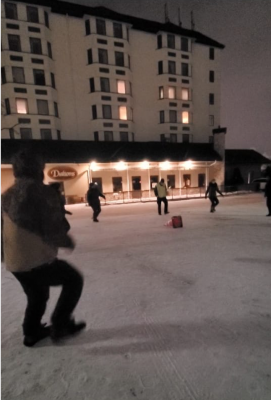 A security guard, seen wearing yellow, at the Best Western Plus Hotel in Winnipeg joins in a square dance. (Photo courtesy of Bridget Pingwartok)

“They enjoyed it as much as we did.”

Some days, participants would donate money for a cash prize.

“I actually won myself 20 whole dollars for being the slowest runner,” she said with a laugh.

“I tried my best to run fast,” she insisted, “but I was the slowest.”

Heather Kolit-Carter was also among the first to join in. She said people on different floors of the hotel are allowed outside on a rotating schedule, for about 30 minutes every two hours.

“Time flew,” she said about the games. “It’s better than just walking around — at least we were active and we were outdoors.”

Kolit-Carter said as far as she knows, nobody on other floors planned activities.

“A couple of people I know who are on different floors want to move to the fourth floor,” she said. 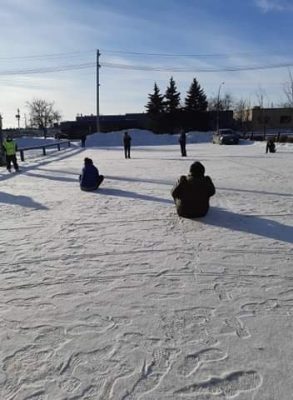 People isolating on the fourth floor of a government-run isolation hub in Winnipeg are seen here competing in a sliding race across the parking lot. (Photo courtesy of Bridget Pingwartok)

Bridget Pingwartok also participated. She said her favourite game was one where participants tied a long strand of yarn around their waists and a pen on the other end. The goal was to pick up an empty pop can with the dangling pen and race to the end of the parking lot and back.

For a makeshift game of bowling, Pingwartok said they used empty water bottles as pins and crafted bowling balls from plastic bags.

“We use whatever we can from the rooms,” she said.

Pingwartok, like the others, said before isolating she heard it was very boring and could be depressing, “but we had to find ways to make it fun and to make the time pass.”

She began isolating about a week after the women who spearheaded the games did, so most of them are flying home in the coming days, or already have.

“They made it so fun,” she said. “Time is probably going to go slow now.”

Kolit-Carter was scheduled to complete her 14-day isolation around Jan. 27. She said she hopes the others in the hub keep thinking of activities after the original planners leave.

Pudlat, who flew home to Rankin Inlet on Thursday, said “a few days before we left, the security kept telling us they already missed us.”