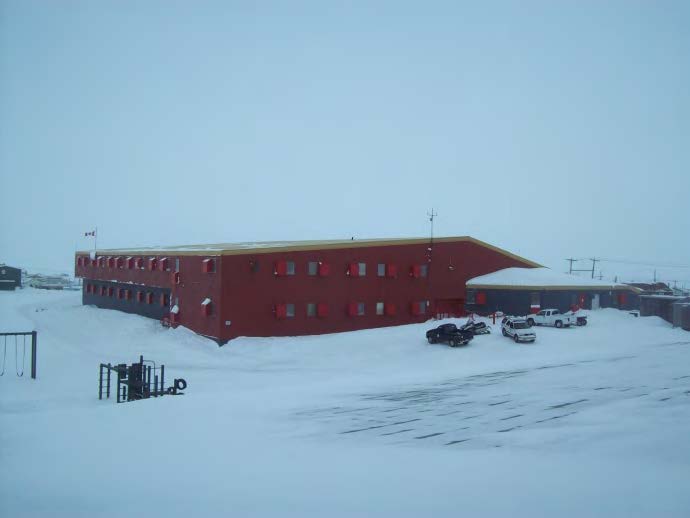 Students at Maani Ulujuk Ilinniarvik high school in Rankin Inlet had a chance last semester to enrol in a new law class that would allow them to interact and learn from Inuit justice professionals. (Photo courtesy of the Government of Nunavut)

When Dylan Kusugak enrolled in a new law class at his school last fall, he wondered whether the subject would pique his interest.

It did. Now, the Grade 12 student at Maani Ulujuk Ilinniarvik high school in Rankin Inlet says he’s thinking about pursuing his interest further.

The class was equally well received by Kusugak’s peers.

“The students have been super engaged and really enjoying learning about both colonial law and Inuit law and the differences, similarities and the interplay of both on their territory,” said Victoria Perrie, a Metis-Cree criminal lawyer with legal aid in Rankin Inlet, who started and taught the course.

Perrie, who also has a background in Indigenous arts and cultural education, came up with the idea for the class based on her experience delivering an Indigenous youth outreach program in Winnipeg.

“That class was really eye-opening,” said Perrie, who taught the program alongside three other young Indigenous women.

“On the first day, one of the kids said, ‘Wow, we thought it was going to be a bunch of old white dudes that were coming to do this class, you guys actually look like us.’”

Those words stuck with her.

In December 2019, Perrie sat down with the vice-principal of Rankin Inlet’s high school and together they came up with the idea of a four-credit course to be offered in the fall of 2020.

The objective of the class was to create “a space where students can see, learn and interact with justice workers who look like them, who are Inuit,” said Perrie.

“It was important for me to show them that as an Inuk lawyer that I could speak Inuktitut, so I did my presentation bilingually,” she said.

“I think the main point of what we wanted to do is just get the students in that classroom to feel like they can reach for the goal of being a lawyer and that they can see that Inuit can do it,” she said.

The value of an early exposure to the legal and justice systems isn’t lost on Idlout, whose own path to becoming a lawyer was inspired by her mother, Carmen Idlout, a former justice of the peace.

The class also explored other career opportunities in law.

Students also heard presentations from other justice professionals, including guards and administrators at the Rankin Inlet Healing Facility, a speaker from victim services, another from sheriff services, a court clerk, a court reporter and others.

“It’s not just about trying to have an Inuk lawyer in five years, it’s about getting them in the system at every level,” said Jason Harris, a teacher at the school who helped facilitate the class alongside Perrie.

For many students, careers with victim services or the healing facility were more appealing because, unlike the prospect of law school, these opportunities are available without having to leave the community, Harris said.

“Seeing how the students interacted with those elders and became engaged with Inuit law, that was a highlight for me,” she said.

The class’s final assignment was going to be a mock trial in Iqaluit, where the class was meant to conclude.

The students were to assume various roles in the courtroom, including Crown prosecutors, defence lawyers, jury members and others, then carry out a trial.

Unfortunately, the arrival of COVID-19 and subsequent public health restrictions prevented the trial from happening.

Despite the abrupt end, Perrie said the school intends to bring the class back to Rankin Inlet for the 2021 fall semester, with the possibility that it may later expand throughout the Kivalliq.

Idlout is also working on creating a similar course for Iqaluit, which she hopes may also begin during the 2021 fall semester.

“I would love for more Inuit to realize that they can advocate for themselves, that they can use their voice to make a difference,” she said.