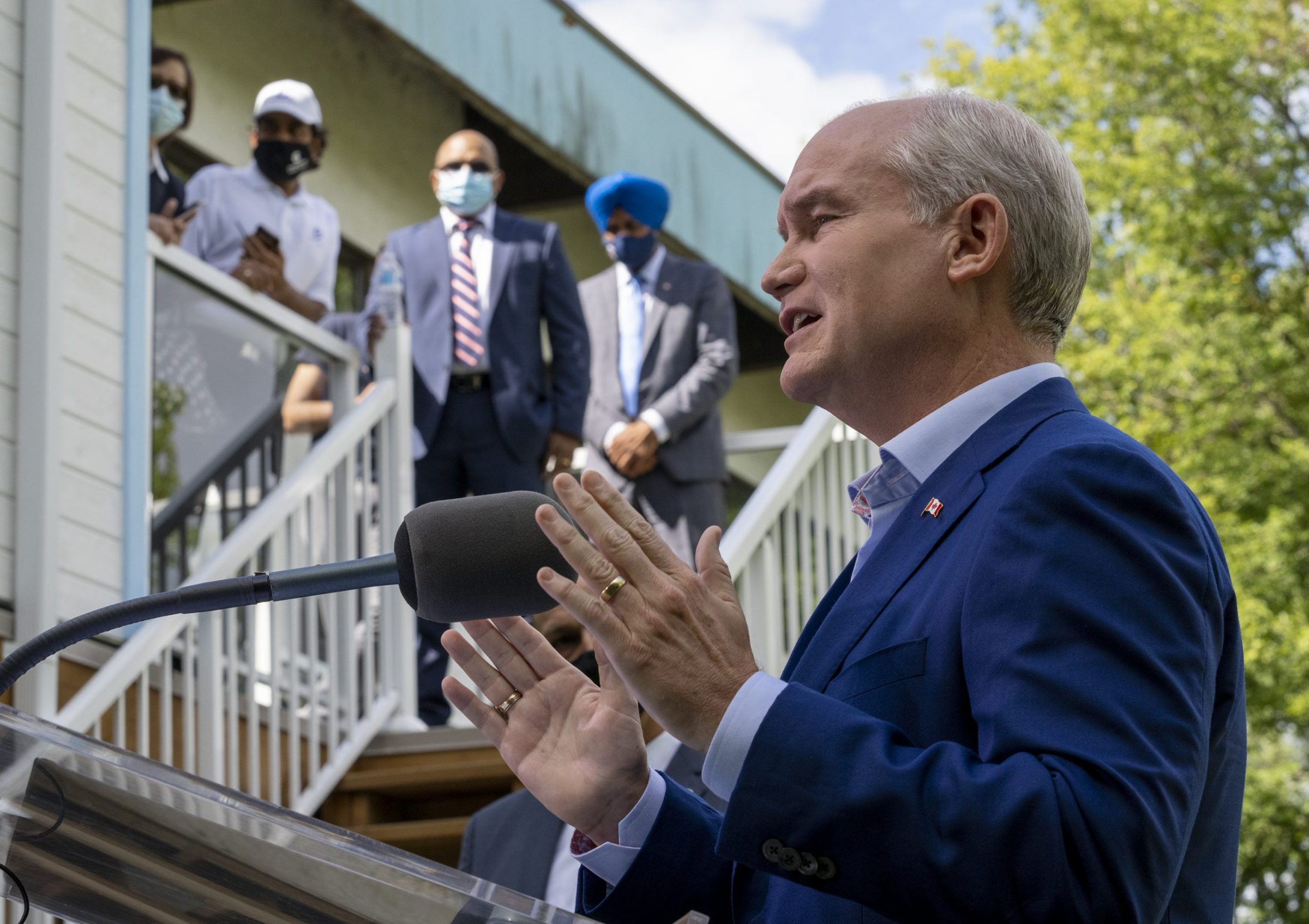 Supporters look down from a balcony as Conservative Leader Erin O’Toole speaks at a campaign event in Mississauga, Ont. on Friday, Sept. 10, 2021. Canadians will vote in a federal election Sept. 20th. (THE CANADIAN PRESS/Frank Gunn)

OTTAWA — Federal party leaders are back on the campaign trail after locking horns in two back−to−back leaders’ debates, while Canadians started voting in advance polls.

NDP Leader Jagmeet Singh was early out of the gate on Friday morning, holding a news conference in Ottawa to tout his party’s platform before flying to British Columbia where he was scheduled to vote in advance polls on the first day they open.

Singh revealed the NDP will release the full costs of its campaign promises on Saturday, as he faced several questions about why Canadians have yet to see the fine print on its platform with the final vote just 10 days away.

Both the Conservatives and Liberals have released fully costed platforms.

“We’ve been working with the PBO, and it certainly does take time,” Singh said in reference to the parliamentary budget officer.

“The PBO is obviously very respected and they’ve got a great track record of being able to cost our platform. So we wanted to work with them, and we’ll have our costed platform released on Saturday.”

Canadians already know what the NDP are proposing, he added, including universal pharmacare, affordable childcare, dental care and a tax on the wealthy to pay for its campaign promises.

Liberal Leader Justin Trudeau was scheduled to visit Hamilton, Ont., as his party launched a new advertising campaign in Quebec, which has once again emerged as a key battleground for determining the election winner on Sept. 20.

Conservative Leader Erin O’Toole was scheduled to appear in the Greater Toronto Area with a visit to a Royal Canadian Legion hall in Mississauga in the morning and an evening rally in Whitby.

Bloc Québécois Leader Yves−Francois Blanchet was scheduled to spend much of the day in his home riding in the Montreal suburb of Chambly, including casting his ballot at an advance poll, before heading to Quebec’s Eastern Townships.

The unemployment rate fell to 7.1 per cent for the month, compared with 7.5 per cent in July, bringing the rate to the lowest level since the onset of the pandemic last year.

Gains were concentrated in full−time work and in the hard−hit service sector, led by gains in accommodation and food services as restrictions eased in much of the country.

It remains to be seen whether either Wednesday’s French debate or Thursday’s English debate moved the public opinion needle.

Heading into the debates, polls suggested the Liberals and Conservatives were locked in a dead heat, with smaller parties poised to determine which of the main parties emerges victorious.

The English debate was fractious, its format widely panned for giving leaders little time to engage substantively with one another or to respond to barbs from rivals.

Blanchet took umbrage with moderator Shachi Kurl, a pollster with the Angus Reid Institute, for a question he said suggested Quebec is racist and he later criticized Liberal Leader Justin Trudeau for not coming to the province’s defence.

Trudeau, who had rounded on Blanchet in Wednesday’s French debate for questioning his devotion to Quebec, told reporters the format didn’t give him a chance to respond.

He reiterated his opposition to Quebec’s secularism law — which Kurl had called “discriminatory” because it bans public servants in positions of authority from wearing religious garb or symbols — but said Quebecers are not racist.

Quebec, with 78 seats, is a key battleground that could determine the outcome of the election.

At dissolution, the Liberals held 35 seats in the provinces, the Bloc 32, the Conservatives 10 and the NDP just one.

Hours before Thursday’s debate, Quebec Premier Francois Legault all but endorsed O’Toole’s Conservatives, saying they’d be easier to work with than the Liberals or NDP, whom he accused of wanting to intrude on Quebec jurisdiction over health care and other matters.

O’Toole has promised to transfer billions to the provinces for health care with no strings attached.

The English debate represented the leaders’ last best chance to sway millions of voters. It came just as four days of advance polls were set to open Friday.

This report by The Canadian Press was first published Sept. 10, 2021.