At this year’s Inuit Studies Conference, Inuit women were regularly highlighted as a force in their communities.

Of the six keynote speakers, five were Inuit women, who each brought a wealth of knowledge and experience to share from their chosen fields. Names like Aaju Peter, Alethea Arnaquq-Baril and Ruth Kaviok attracted eager audiences.

So eager, in fact, that the auditorium at the Université du Québec à Montréal, where the conference was hosted, was regularly packed. Parts of the crowd needed to sit on the floor if they wanted to attend.

Aaju Peter, the lawyer and activist well-known for her protest against the European Union’s sealskin ban, began her keynote with a song. It was traditional, celebrating the return of the sun, and part of the Inuktitut lyrics translated to “I shall be alive again.” 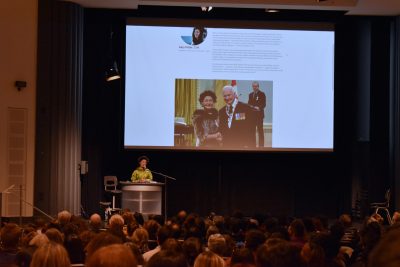 Aaju Peter during her Friday, Oct. 4, keynote address at the 2019 Inuit Studies Conference in Montreal. (Photo by Kahlan Miron)

Those words set the tone of Peter’s speech. “We have to go through decolonization,” she said, “because our minds are so colonized. The way we think, the way we do things. How we read things, how we understand things. It’s all colonized. It’s not coming from our Inuit world, so we need to find that belief again in our worth.”

Peter spoke from her own experience: as a Greenlandic Inuk, Peter went to Denmark for school when she was young, and came back to find she’d lost her language and culture.

Peter said was left with a hunger for knowledge, describing it as a “black hole in my stomach,” and finally got the opportunity to learn Inuktitut and Inuit tradition when she moved to Canada. But the lessons Peter received from the elders contrasted with her lessons in Western law.

“All those concepts that we were learning in law,” she said, “we … couldn’t understand them unless we had our elder teaching us the traditional terms and then the Inuit concept of law.” For example, property laws make little sense when compared to the traditional concept of land and place.

The goal of justice is different, too: Western law focuses on teaching through punishment, whereas Inuit law is “all about reconciling, because everyone is needed in the camp.”

But the biggest difference, she said, may be how Inuit law is carried in a person’s heart. It’s been developed and passed on through generations, with each generation of Inuit keeping what works and abandoning what doesn’t.

At the end of her keynote, Peter shared her wishes for a university in the North. Youth would have more options for higher education, but in an Inuit setting, with Inuit languages and knowledge, rather than going south.

“Wouldn’t it be wonderful to attend and listen from our own elders, and from our own understanding of the world? I look forward to that day.”

The power of voice

Alethea Arnaquq-Baril began her Oct. 5 keynote with a powerful comparison. “While I’m not an academic researcher,” she said, “there are similarities between our fields.”

“I do a lot of research, I have to observe the world around me. I try to see past the issues and problems happening immediately in front of me and look for the root causes. I look for patterns. I look for blockages that prevent our people from being whole and healthy. And when I see them, I feel compelled to speak up about them.” 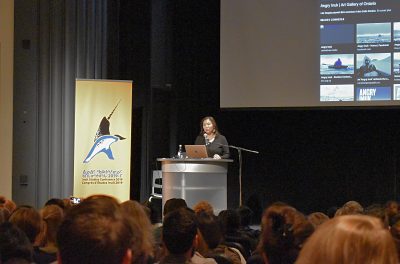 Alethea Arnaquq-Baril during her keynote on Oct. 5. (Photo by Kahlan Miron)

Arnaquq-Baril’s work as a director, producer and screenwriter is built on truths. Her documentaries, such as Angry Inuk and Tunniit: Retracing the Lines of Inuit Tattoos, puts the spotlight on Inuit realities. Her fictional films, like The Grizzlies movie, often do the same.

But one of the benefits of being an artist, Arnaquq-Baril said, is she’s free to use her voice how she wishes. Others, who might have “an abusive boss, or a racist boss, or a boss that just doesn’t really get it,” are often less lucky.

Arnaquq-Baril also asked non-Inuit in the room to consider their actions. “Are you truly using your voice to amplify and bring attention to the voices of Inuit? Or are you just stealing the microphone?”

She cautioned Inuit to be wary of others who try to help. A person can start off with the best intentions, she said, but “end up making themselves indispensable to a project or indispensable to an organization. And then it can’t function without them … and then it’s just a reason to not have an Inuk progress in their career.”

Drawing strength from the past 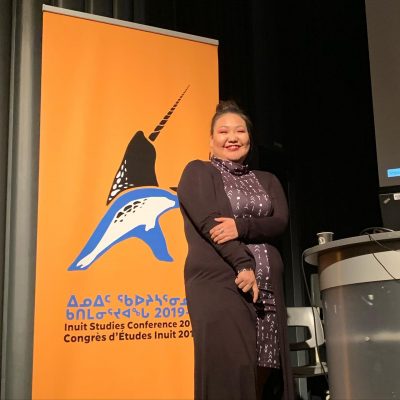 “Once you learn the history of Inuit, you get to understand the big picture,” Ruth Kaviok said during her Oct. 5 keynote.

Kaviok—a Nunavut Sivuniksavut and Students on Ice alumna, the outgoing president of the National Inuit Youth Council and now a fourth-grade teacher—was at the conference to speak about Inuit youth. But she tied her topic to an important lesson: the power of knowing your own past.

Kaviok experienced this in her own life. While attending Nunavut Sivuniksavut, she learned about residential schools, and these lessons helped her better understand her father.

Kaviok said that they’d had a distant relationship, but when he came to visit, she missed an entire morning of classes as she and her father discussed some difficult topics for the first time.

The program, and its focus on history and Inuit knowledge, helped her heal as a person, an Inuk and a daughter, Kaviok said. 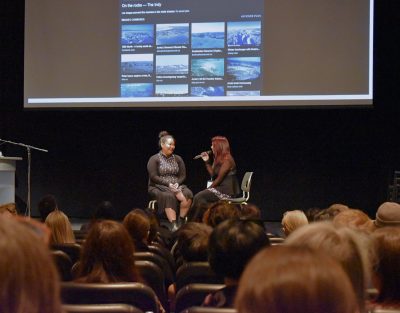 “It takes a lot of effort and help to get to where we want to be. As Inuit youth especially, because we know that this is our future. We know that this will be the ripple effect for the work we do.”

“Colonialism is the reason why we are the way we are,” Kaviok said. “But we’re striving much stronger and louder than we ever did before, and this is also a good thing because having a pride in your Inuit culture leads to many opportunities in saving [the] other younger generations’ future. Because of the change we’re [creating] and this is the start today.”

Kaviok called for youth to be taught more traditional skills and the Inuit language, and to have more opportunities to bond with elders. “If we indigenize every aspect of our life, imagine how much peace there will be in the future.”