Liberals promise to table UNDRIP law within one year 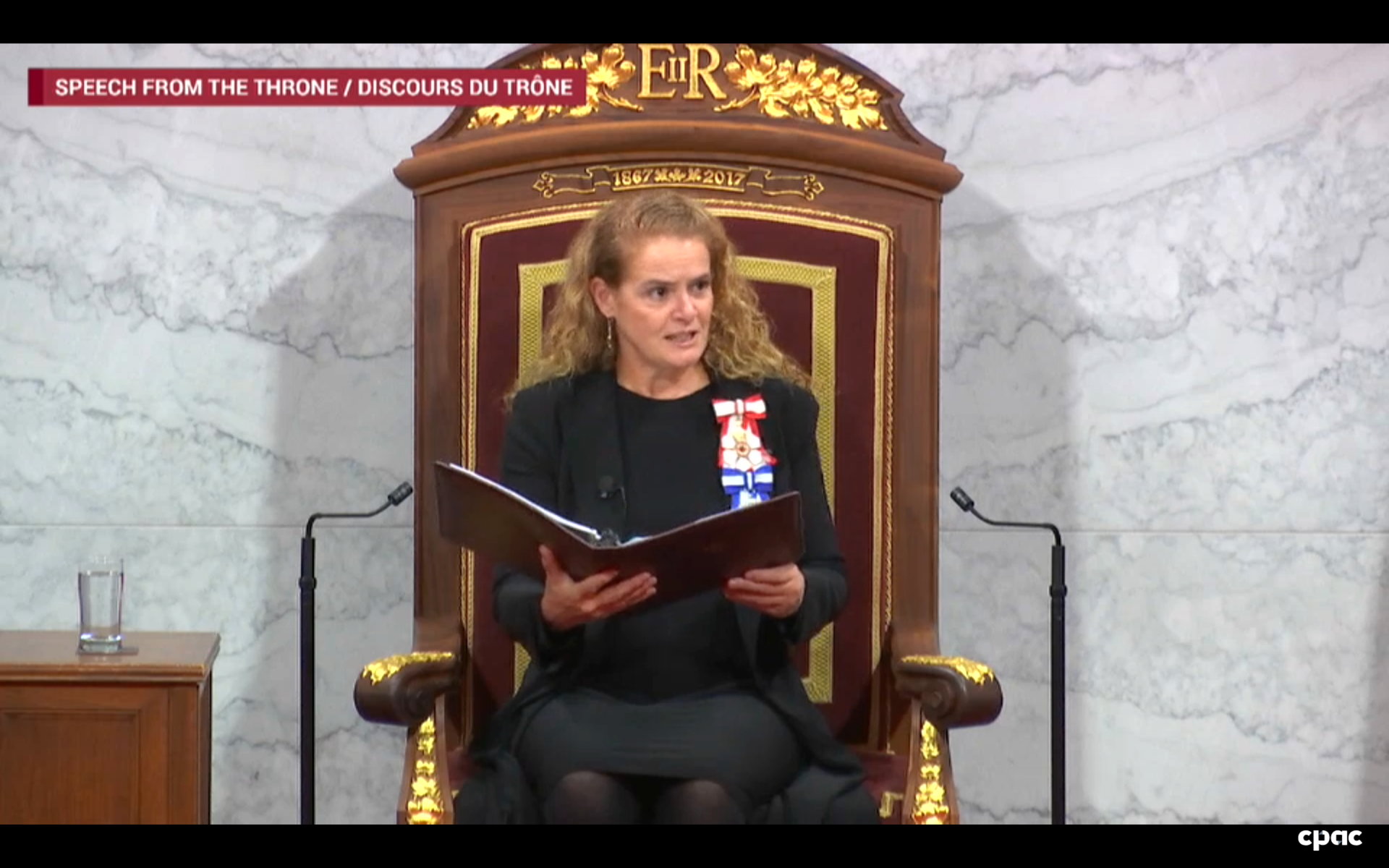 Governor General Julie Payette delivers the government’s throne speech on Thursday, Dec. 5, from the Senate chamber, in a ritual that marks the start of the 43rd Parliament. (Screenshot)

Within the first year of its mandate, Justin Trudeau’s minority Liberal government will introduce a law to implement the United Nations Declaration on the Rights of Indigenous Peoples, the government said in yesterday’s throne speech.

That proposed new law—promised in a section of the speech that claims the government will continue work on reconciliation—would be co-developed with Indigenous peoples, the government said.

The last attempt to acknowledge UNDRIP in Canadian law was a private member’s bill sponsored by Romeo Saganash, the former New Democratic Party member for the northern Quebec riding that includes Nunavik.

Saganash’s bill passed in the House of Commons, but died on the Senate order paper after the Senate adjourned ahead of the October federal election.

The bill became bogged down early this year over discussions about the meaning of the term “free, prior and informed consent” and its implications for resource projects.

This time, the next attempt at passing an UNDRIP law will be sponsored by the government, but it remains to be seen what the bill will say and how long it will take to pass it.

Canada’s national Inuit organization, Inuit Tapiriit Kanatami, responded to that and other promises with guarded optimism.

“Inuit leadership takes the co-development of legislation seriously and we are committed to working in the spirit of true partnership with government to realize our joint ambitions,” ITK said in a statement.

And ITK said they’re encouraged by two other commitments:

• To close the Indigenous infrastructure gap by 2030.

• To co-develop a new law that would ensure that Indigenous people have access to high-quality, culturally relevant health care and mental health services comparable to those received by other Canadians.

“Inuit Tapiriit Kanatami welcomes the affirmation in today’s speech from the throne that reconciliation with Indigenous peoples remains a core priority for this government,” ITK said.

The throne speech had nothing to say about the Arctic and northern policy framework that was released the day before the start of the federal election campaign.

It also had nothing specific to say about the northern territories or most Inuit priorities.

“The Prime Minister affirmed the Government of Canada’s commitment to continued support for Canada’s Arctic and northern regions,” the prime minister’s office said in a statement.

The throne speech, which Governor General Julie Payette gave on Thursday, Dec. 5, from the Senate’s temporary quarters inside a former railway station in downtown Ottawa, marks the start of the 43rd Parliament.

Written by government officials, but delivered by the Governor General, throne speeches are intended to state the government’s priorities for its upcoming mandate.

Another big focus of yesterday’s throne speech was action on climate change, including the reduction of greenhouse gas emissions.

• Government measures to encourage the construction of energy-efficient homes

• Help for people displaced by disasters related to climate change

At the same time, using thinly disguised code, the government promised to build the Trans Mountain Pipeline from Alberta to Burnaby, B.C.

“And while the Government takes strong action to fight climate change, it will also work just as hard to get Canadian resources to new markets, and offer unwavering support to the hardworking women and men in Canada’s natural resources sectors, many of whom have faced tough times recently,” the throne speech said.

Other promises that could affect families in Nunavut and Nunavik include:

Following the Oct. 21 federal election, the governing Liberals now hold 157 seats. The Conservatives have 121 seats; the Bloc Québécois, 32; and the NDP, 24; while the Green party controls three seats.

Speech From the Throne 2019 by NunatsiaqNews on Scribd