Lillian Aglukark to be called to Nunavut bar 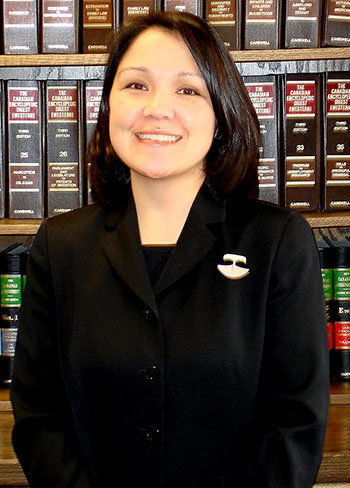 Arviat’s own Lillian Aglukark will be back in her home town Sept. 1 for a ceremony that will make her a member of the Nunavut Law Society. The Akitsiraq graduate, who lives in Edmonton, will be licensed to practice law in Alberta, NWT and Nunavut. Kiviaq and Margaret Harrington are both expected to attend the call ceremony, which will be conducted by Nunavut Chief Justice Beverley Browne. (PHOTO COURTESY LILLIAN AGLUKARK)

The third time will be the charm for Akitsiraq law school grad Lillian Aglukark when she is called to become a member of the Nunavut Law Society in Arviat Sept. 1.

This will be Aglukark’s third “call to the bar,” as she became a member of the Northwest Territories Law Society in 2008, and the Alberta Law Society last July 9.

But for her, this is the most important call, since it brings her back to her home territory, and even more important, her home community.

She graduated in 2005, articled in Yellowknife, and did her bar-admissions courses through Alberta, since the courses are not available in either Nunavut or NWT.

But the event will be even more important to Aglukark and much of Arviat because of two special guests.

One is Kiviaq, also known as David Ward.

Kiviaq is actually the first Inuk to become a lawyer, although he has never been back to his home town of Chesterfield Inlet or even to Nunavut since he was moved south to Edmonton in 1939, at the age of three.

“He’s coming up north with us to take part in the ceremonies,” Aglukark said. “To me that’s huge.”

She is distantly related to Kiviaq through her father.

“That’s the plan,” she added. “But Kiviaq is in his 70s, and he just had an operation. I hope he will be well enough to travel.”

Kiviaq suffers from Ménière’s syndrome, a disease of the inner ear which has so far prevented him from flying, and therefore from returning to Nunavut.

The other special guest is Margaret Harrington, the widow of world renowned photographer Richard Harrington, who will also be making her first-ever trip north.

Her husband documented the lives of Arviat-area Inuit in the 1950s and early ‘60s — including Aglukark’s great grandmother, grandmother and the step grandfather she is named after.

After her Sept. 1 call, Aglukark said, all 11 Akitsiraq grads will be either living or working in Nunavut, with 10 of them called to the bar.

“It’s been a very successful program.”

Aglukark recently began practicing law with the Ahlstrom Wright Oliver & Cooper law firm in Edmonton. Her spouse Sheldon Lundrigan is also based in Edmonton as a pilot for Canadian North.

The firm is a perfect fit for her, she said, as it does a lot of work in Nunavut. As a Nunavut native whose first language is Inuktitut, her focus will be on Inuit clients.

“When a client calls from a small community in Nunavut,” she said, “I will know exactly where they are coming from. And speaking their language puts them more at ease.”

Steven Cooper represented Jack Anawak during last year’s territorial elections when he unsuccessfully contested residency requirements that disqualified him from running in the election.

“Lillian represents the first generation of Inuit who have not only been immersed in European culture, but immensely successful adapting to it,” Cooper said in a media release.

He pointed out that her parents were criticized for sending their children away for education, but the success of all seven children shows their foresight.

In addition to a lawyer, family members include an RCMP officer, a nurse, a social worker, a member of the Order of Canada and senior civil servants.