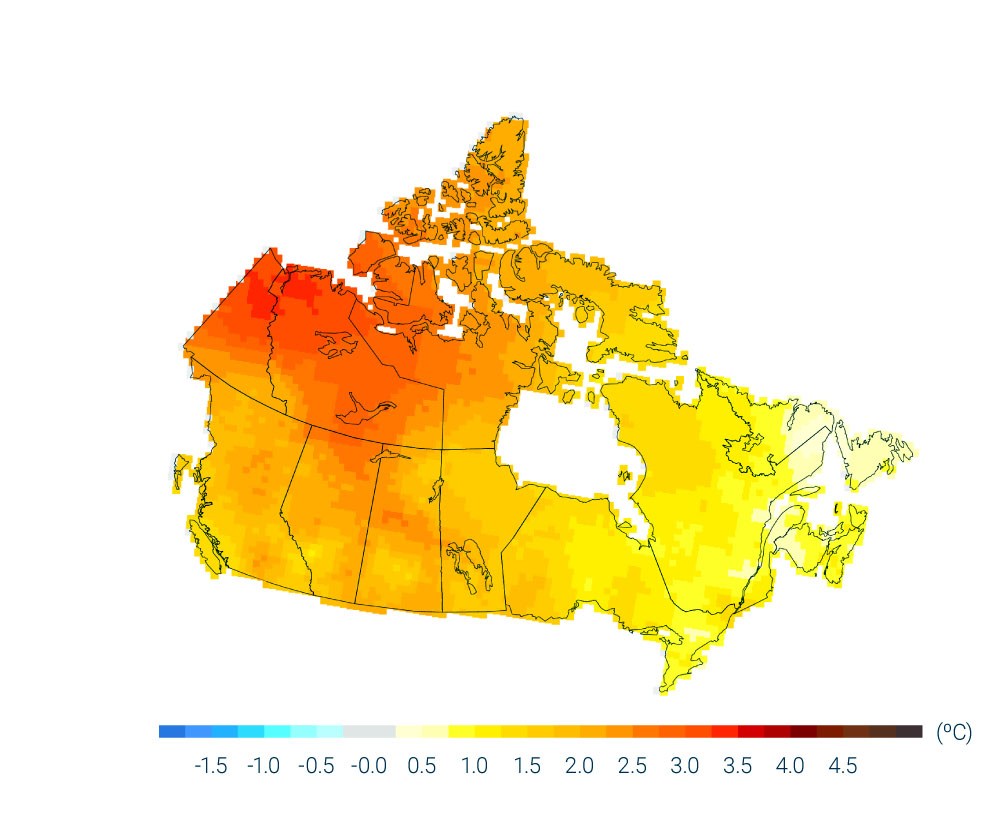 This map shows the observed increases in average temperatures across Canada between 1948 and 2016. The reddish-orange patches in the Northwest Territories and Yukon indicate average annual increases greater than 3 C. (Chapter 4, Canada’s Changing Climate)

In a report that provides more confirmation for the long-standing scientific consensus on climate change, the federal government warns that since 1948, Canada’s climate has warmed at double the rate of the rest of the planet and that in northern Canada, the rate of warming has been even faster.

“It is virtually certain that Canada’s climate has warmed and that it will warm further in the future,” says the report, called Canada’s Changing Climate.

The report was formally released on April 2, but a leaked version made headlines across the country on April 1.

And the federal government scientists also reaffirm that the primary cause of this warming is human activity, especially the emission of heat-trapping greenhouse gases like carbon dioxide.

“It is extremely likely that human activities, especially emissions of greenhouse gases, are the main cause of observed warming since the mid-20th century. Natural factors cannot explain this observed warming.”

The report’s authors also warn that the effects of climate change in Canada since the middle of the 20th century are irreversible and will continue intensifying into the future, because the current volume of greenhouse gases that have already been emitted into the Earth’s atmosphere is likely to persist for centuries.

And until about 2040, the effects of climate change will continue, regardless of whether global emissions are reduced.

They say that they can predict the following, with high confidence:

• More extreme weather in the future, including more extreme high temperatures that will increase in frequency and intensity.

• More severe heatwaves, which will increase the risk of droughts and wildfires.

• Increasing shortages of fresh water in the summer.

• Increased ocean acidification, and as the oceans get warmer, they will lose oxygen. Both phenomena will threaten the health of marine ecosystems.

Most of the expected climatic changes will occur even if the future rise in global average temperatures is limited to less than two degrees Celsius, the target set out in the 2015 Paris Agreement.

Under a high-emission scenario, where future average global temperatures could reach 6.7 C above pre-industrial levels, the effects will become more damaging.

In the Canadian Arctic, most small ice caps and ice shelves will disappear by the year 2100, the report said.

And at the same time, Arctic marine areas like Baffin Bay and the Beaufort Sea will have “extensive” ice-free periods by the middle of this century.

“The last area in the entire Arctic with summer sea ice is projected to be north of the Canadian Arctic Archipelago (CAA) and including the northern islands of the CAA. This area will be an important refuge for ice-dependent species …,” the report said.

And where sea levels are projected to rise, more damage is expected.

“In those areas where local sea level is projected to rise, the frequency and magnitude of extreme high water-level events will increase. The loss of sea ice in Arctic and Atlantic Canada further increases the risk of damage to coastal infrastructure and ecosystem as a result of larger storm surges and waves.”

But the report also says that for the future, “choices matter,” and that the impact of climate change can be reduced in the future if greenhouse gas emissions are also reduced.

“Scenarios with limited warming will only occur if Canada and the rest of the world reduce carbon emissions to near zero early in the second half of the century and reduce emissions of other greenhouse gases substantially,” the report says.