Louis Fortier, a scientist who revolutionized Arctic research in Canada, has died

The oceanographer, who was instrumental in securing the research icebreaker CCGS Amundsen and founding ArcticNet, was 66 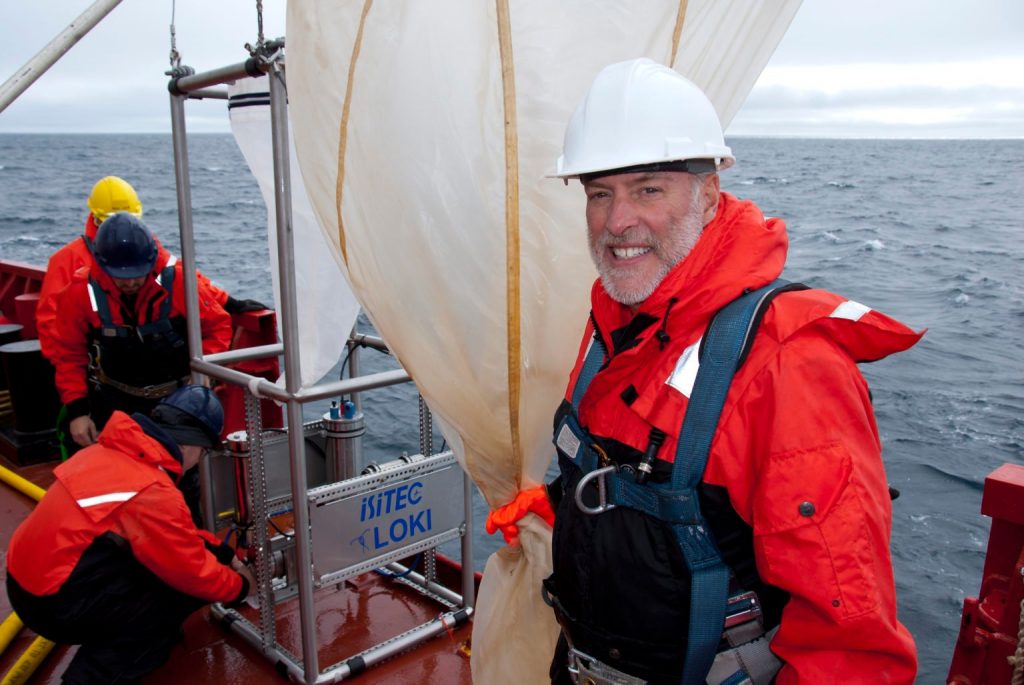 Louis Fortier is seen on the deck of the icebreaker CCGS Amundsen, which he helped turn into a key Arctic research platform. (Photo courtesy of Keith Levesque)

Louis Fortier, an oceanographer who transformed the way Arctic research is conducted in Canada, died on October 4 from complications related to leukemia. He was 66.

Fortier excelled at bringing people and scientific disciplines together to tackle complex questions about the changing Arctic. He was a tireless advocate for northern science and the driving force behind several large Arctic research initiatives in Canada, including the conversion of a rusting decommissioned icebreaker into the CCGS Amundsen, a floating research institute that has supported hundreds of Canadian and international researchers over the past 17 years.

Fortier’s own work focused on zooplankton and fish larvae, particularly Arctic cod, which, as a keystone species, helps hold the whole Arctic ecosystem together. Although he once compared a wriggling, gummy cod larvae to something that you might find in your nose, the creature is a key element to understanding how climate change will affect the ecology of the Arctic and the lives of those who live there.

David Barber, an ice scientist at the University of Manitoba and the scientific director of the Churchill Marine Observatory, who worked with Fortier for 25 years, called him a “visionary” who was “driven by big ideas.”

Fortier was born on October 25, 1953, in Quebec City, to Pierre and Louise (Roy) Fortier. He was the middle child of five siblings and grew up in Trois-Rivieres, Quebec, on the shores of the St. Lawrence River. He received his undergraduate and master’s degrees from Laval University in 1976 and 1979, respectively, and a Ph.D. from McGill University in 1983. Fortier studied in Plymouth, U.K., as a postdoctoral fellow in 1984-85, and returned to Laval University in 1989 as a professor.

At that time, an Arctic research project in Canada typically included a scientist, some graduate students, a sled, some dogs and an Inuit guide. The scope of the science was usually narrow, often restricted to tent camps set up on the ice, with nearly impossible logistics.

Fortier quickly realized that he couldn’t understand the dynamics of Arctic cod without knowing more about warming temperatures, disappearing sea ice, freshwater inputs and other factors.

“Louis had this idea that what we should be doing was making larger and more integrated teams,” says Barber. “Those integrated teams would look at the multidisciplinarity of the problem, look at it more from a system perspective.”

Fortier’s first big breakout project was the International North Water Polynya study, conducted from 1997 to 1999. More than 60 scientists from Canada, Japan, the U.S., Denmark, Poland, the U.K. and Belgium, studied a largely ice-free area in northern Baffin Bay, between Canada and Greenland. The North Water Polynya, or Pikialasorsuaq, is thought to be one of the most productive ecosystems north of the Arctic Circle. Although the expeditions were declared a success, Fortier and his colleagues quickly learned the icebreaker they were using, the CCGS Pierre Radisson, was ill-equipped for scientific research. 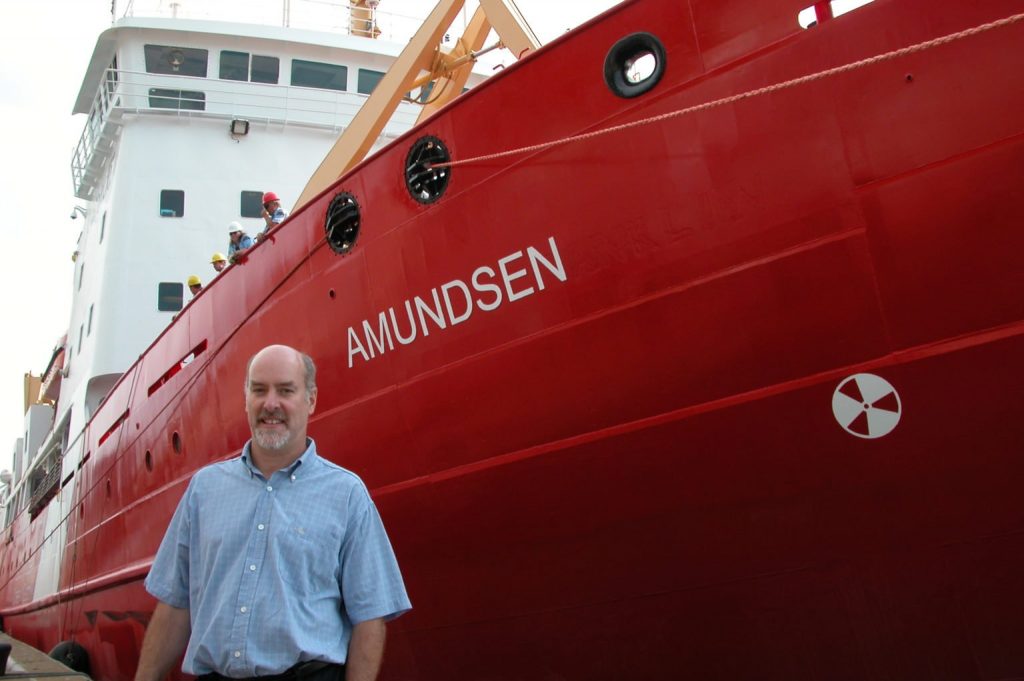 In 2002, Fortier secured CA$27.5 million from the Canada Foundation for Innovation for a dedicated research icebreaker. He had a decommissioned vessel hauled from St. John’s, Newfoundland, to Quebec City to have it refurbished for research, and named after the Norwegian Arctic explorer Roald Amundsen. Less than a year later, in August 2003, with a new moon pool, multi-beam sonar and other scientific equipment on board, the CCGS Amundsen set out for the Arctic, where it would stay for more than a year.

Fortier led the Amundsen on that first mission, an ambitious international project called Canadian Arctic Shelf Exchange Study (CASES) that kept the ship at sea for 390 days, mostly in the Beaufort Sea. Researchers from Canada and nine other countries studied the links between sea ice cover, which had already begun to shrink, and its impact on the Arctic ecosystem. The ship also became a floating clinic for health research in the north with the Nunavik Inuit Health Survey, known as “Qanuippitaa?” (or “How are we?”) in Inuktitut.

An even more ambitious project called ArcticNet followed in 2003. The consortium enables northern researchers to collaborate with government agencies, Inuit organizations and northern communities, as well as international researchers. It quickly evolved to enable northerners’ voices to guide the research, says Philippe Archambault, a marine ecologist who studies Arctic kelp, who is now a scientific director of ArcticNet, a position he shares with University of Ottawa researcher Jackie Dawson, who studies the human dimensions of environmental change.

Fortier had a gift for translating Arctic research for nonspecialists including journalists and policymakers. Called a “showman” by some of his colleagues, he could talk about his science and put it into the larger context of climate change, sovereignty and the relationship of Inuit and other Arctic Indigenous peoples with the land, water and animals. He encouraged his colleagues to do the same, imploring them to “leave the ivory tower” of academia to transform their knowledge into action or policy.

“Louis had this ability to bridge both worlds. He worked at the front edge of science and could bring it to a level that everyone could understand,” says Archambault.

Over time, Fortier made the CCGS Amundsen a destination for students, journalists and political leaders so they could experience the Arctic and witness Arctic climate change firsthand. Dr. Mona Nemer, Canada’s chief scientist, who joined the Amundsen on the final leg of its 2018 expedition, posted a tweet on Oct. 6 stating, “The world has lost a giant in climate science and Arctic research.”

I am deeply saddened by the passing of my friend and colleague, Louis Fortier. The world has lost a giant in climate science and Arctic research. His legacy will live on in the new generation he trained and in the institutions he built. https://t.co/Yjp8obpaAB pic.twitter.com/vKMy6LT97b

Marianne Falardeau-Côté, a former graduate student in Fortier’s lab, who is now a postdoctoral fellow at Laval University, recalled a research expedition where, standing on the deck of the Amundsen with Fortier, he plucked a shrimp from the nets they had just reeled in. “We just had it raw like that,” Falardeau-Côté says. “It’s an example of how passionate and energetic he was.”

“He was a bit of a locomotive, and we all followed,” says Martin Fortier (no relation), who did his master’s and doctoral degrees with Fortier, and who is now the executive director of Sentinel North, a transdisciplinary northern research program based at Laval University. “He had ambition and energy, and never took no for an answer.”

In 2011, the Canadian Mint chose to feature the CCGS Amundsen on the back of Canada’s new $50 bill.

“It was a recognition of a lot of effort,” says Fortier. “Not only for the Amundsen, but also … respect for Arctic research.”