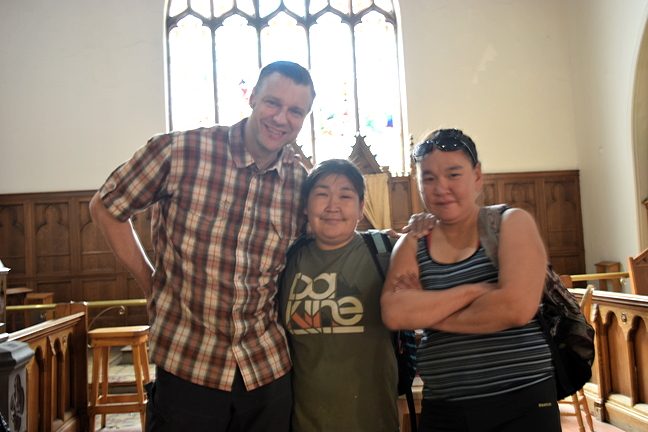 David Chapman (left) the executive director of Resilience Montreal, says while an Indigenous-led solution to homelessness is the way forward, it may take time to apply. (File photo)

A Montreal shelter worker commends a set of recommendations put forth by the city’s ombudsman to better address Inuit homelessness, but says he’s not confident the city will move quickly on implementing them.

An investigative report, called “Don’t Look the Other Way,” was released May 4 by Montreal ombudsman Nadine Mailloux. It sheds light on Indigenous, particularly Inuit, homelessness in the Milton Park area in central Montreal.

The 40-page report’s publication follows complaints from a group of citizens in the neighbourhood that city authorities are not adequately addressing the issue of homelessness, and includes consultation from various shelters, Indigenous groups and advocates in Montreal.

It makes five comprehensive recommendations calling on the city to take action on Indigenous homelessness.

“While I suggest an Indigenous-led solution is the way forward, I wouldn’t suggest that somehow that’s going to be easy to apply,” said David Chapman, executive director of Resilience Montreal, a downtown homeless shelter.

Chapman says local Indigenous groups and larger organizations like Makivik and the Assembly of First Nations should sit down with city officials to discuss solutions, but that he doesn’t expect local government to “just quickly jump to that.”

“That is the solution that in the long-term will succeed, but I think it will take some time for the city itself to come around to that,” he said, citing how accepted academic solutions to housing insecurity are often “at odds” with intuitive, Indigenous-led solutions.

Pita Aatami, president of the Nunavik land claims organization Makivik, however, is encouraged by the recommendations outlined in the report, calling them “essential and achievable goals.”

“We are pleased to see that the ombudsman’s conclusions reflect the work and objectives that Makivik has carried out over the years,” said Aatami in a statement to media on May 5.

Aatami said the recommendations are all “priority items.”

“We expect that the various levels of government will take the recommendations seriously and address the issues that disproportionately affect not only the Inuit, but all the Indigenous groups who experience homelessness in the city,” Aatami said.

Mailloux has forwarded the report to the Quebec ombudsman, who will open an investigation.