Man gets 5 years for ‘disturbing in the extreme’ aggravated assault 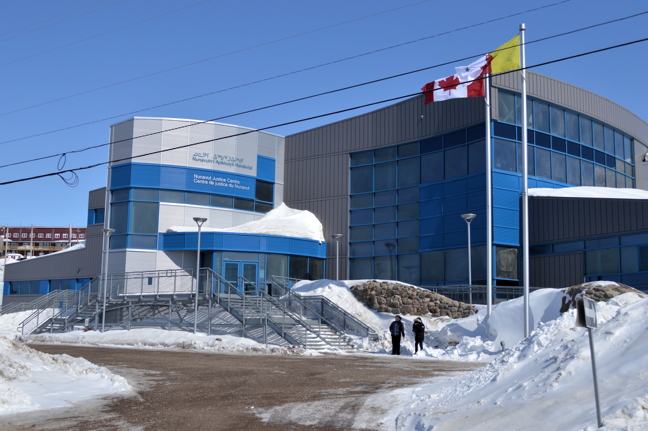 In court in Iqaluit earlier this month, Judge Neil Sharkey sentenced a man to five years in jail for aggravated assault of his common-law wife, calling the photographs of her injuries “among the most disturbing” he had seen. (File photo)

Calling photographs of a woman’s injuries “among the worst I have seen in some 13 years on the bench,” Judge Neil Sharkey has sentenced a Nunavut man to five years in jail for assaulting his common-law wife.

Nicholai Angivrana, who was 25 at the time of the incident in October 2021, pleaded guilty to aggravated assault of his then 22-year-old partner, threatening to kill her, and four other charges.

He went before the Nunavut Court of Justice for sentencing on Nov. 15 in Iqaluit.

“The facts of the aggravated assault in this matter are disturbing in the extreme,” Sharkey said in his sentencing decision, a copy of which was provided to the media by the Nunavut Court of Justice.

Angivrana and the woman, who is referred to in the court document only by initials to protect her identity, had been living together for a couple of years. The judge’s decision did not indicate what community the assault occurred in.

In October 2021, the pair were drinking when Angivrana “put a serious beating” on her while he was in a “drunken rage.”

He threw her into an air vent, hit her in the face and called her worthless, hit her with a laptop computer and threatened to kill her if she left him, Sharkey said, summarizing the case.

“Most significantly … and while in this drunken rage, Mr. Angivrana used his teeth to actually bite off a large portion of [the woman’s] upper lip,” the judge said.

The assault took place in the couple’s bedroom. The woman’s mother heard it and called police, who arrested Angivrana.

The woman was medevaced to a southern hospital for a month and underwent several restorative surgeries and psychiatric care.

While the surgery was successful, the judge said the woman will be “permanently scarred both physically and psychologically.”

Sharkey cited the words of the prosecutor, who said, “This is an injury which will touch [the woman] every day of her life when she looks in the mirror.”

In March 2022, five months after the assault, while he was in custody, Angivrana sent messages to the woman blaming her for making his life miserable and threatening to hurt her and to kill her.

The judge noted Angivrana had a difficult childhood and had witnessed violence at home, where his father abused his mother.

Angivrana said he was addicted to marijuana in his teens, took medication for attention deficit hyperactivity disorder despite not having been formally diagnosed, and showed signs of fetal alcohol spectrum disorder although it was also not formally diagnosed.

While he scores “extremely low on the intelligence … scale,” the judge concluded Angivrana “likely” doesn’t have an intellectual disability.

He hadn’t held a job “because he is known in the community as a thief” and had been in jail “numerous” times.

Sharkey sentenced Angivrana to five years in jail, but gave him 18 months’ credit for the one year he spent in custody between his arrest and sentencing.

It means Angivrana has about three and a half more years to spend in custody.