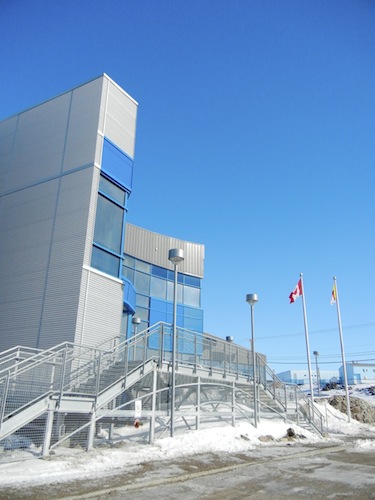 A Nunavut judge has ruled that a repeat sex offender should be designated as a long-term offender rather than a dangerous offender, which would have seen him incarcerated indefinitely. The long-term offender status is meant to combine a prison sentence with a long-term period of supervision with certain conditions. (File photo)

Man sentenced to five years for pointing rifle at girlfriend, shooting into house

A Qikiqtarjuaq man has been sentenced to five years in jail for pointing a semi-automatic rifle at his girlfriend’s head and firing shots into the house she was in.

Ronald Audlakiak, who was 23 at the time of the offence, was charged with discharging a firearm, mischief and pointing a firearm, according to a written sentence handed down by Judge Susan Cooper on Dec. 14 in the Nunavut Court of Justice.

According to the decision, Audlakiak was intoxicated on Feb. 24, 2019, when he went to confront his girlfriend, who is also the mother of his child, at someone else’s home.

Another visitor at the house broke up the fight, then went to a nearby shack on his Ski-Doo.

Audlakiak left the house, got a semi-automatic rifle and shot at the Ski-Doo multiple times before going back to the house where his girlfriend was.

He pointed the rifle at his girlfriend’s head when she opened the door, pushed his way into the house, fired the rifle and asked where the homeowner was.

“[The homeowner] was understandably concerned that Ronald wanted to shoot him,” states Cooper. “[He] escaped the house by climbing out of a bedroom window.”

Audlakiak fired the gun at least four more times and left. None of the shots hit anyone.

Neighbours heard the shots, called the RCMP, and Audlakiak was arrested.

He confessed to police he wanted to kill the homeowner.

Audlakiak’s girlfriend told the court that since the incident, she has suffered from depression, post-traumatic stress, anxiety and panic attacks.

She lost her housing after the shooting because she had been living with Audlakiak, and plans for her young son to return to the community were cancelled. Her son remains in care.

As well, she is still scared of Audlakiak and what will happen when he gets out of jail.

“She feels anger and sadness,” Cooper wrote. “She struggles to cope with daily activities and has difficulties interacting with others.”

In sentencing, Cooper took into consideration the seriousness of the offences as well as any possible Gladue factors, but did not find them.

Gladue factors are circumstances inordinately faced by Indigenous people that influence criminality, including residential school and its inter-generational impact, poverty, low levels of education and substance abuse, among others.

“The offences in this matter are extremely serious,” wrote Cooper, who described Audlakiak as able to maintain good work and support his family through hunting, despite the fact he is “essentially illiterate.”

She took note of Audlakiak’s propensity towards anger, describing it as “concerning.” In 2017, he was sentenced for assault causing bodily harm.

Cooper says Audlakiak’s mother is afraid of him, and even displayed “fits of anger” over the phone with her during preparation of the pre-sentence report.

“His underlying deep anger appears to remain,” Cooper wrote. “He has little insight into the issues that bring him before the court.”

Audlakiak was given 1.5 days credit for time served, which leaves him with just over two years left on his sentence. He also has a 10-year firearms prohibition.