This walrus-ivory carving was given to Knud Rasmussen by the shaman and hunter Ava. (Photo courtesy of National Museum of Denmark)

This year marks the 100th anniversary of the Fifth Thule Expedition, an important event in Denmark as well as in Canada.

Claus Oreskov is a well-known Danish student of the expedition and president of the Knud Rasmussen Society.

He has written this week’s Taissumani article as a guest columnist. Regular Taissumani writer Kenn Harper will return in two weeks.

Among the many ethnographic objects Knud Rasmussen collected on the Fifth Thule Expedition is a walrus-ivory carving made by the shaman and hunter (piniartorsuaq in Greenlandic) Ava.

Ava and his wife were among Knud Rasmussen’s most important guides among Iglulingmiut. The carving has never been exhibited but is on display at the National Museum of Denmark.

On the coastline of northern Baffin Island, Knud Rasmussen met an Inuit group called Iglulingmiut, after their main settlement Igloolik at Fury and Hecla Strait.

A large part of the work of the Fifth Thule Expedition took place in and around the settlements of the Iglulingmiut.

Today Igloolik is a modern town, but in Knud Rasmussen’s time it consisted exclusively of snow houses. The expedition participants had many friends and interesting guides among the Iglulingmiut. None, however, were better than Ava and his wife Orulu.

Knud Rasmussen and some of his comrades were out hunting on the sea ice off Cape Elisabeth on Jan. 27, 1922.

The weather was fine, and the sky was sparkling with stars. Suddenly a long sleigh with a wild team of 15 white dogs shot out of the darkness. A small man with a large beard that was completely icy jumped off the sled and reached out his hand in the direction of the white man: “Qujangnamik,” (Thanks to the guest who comes) he greeted with his sonorous voice.

It was the shaman Ava. The guests were invited to Ava’s snow house complex, an impressive building with several rooms, corridors and storerooms.

Knud Rasmussen writes about his first meeting with Ava’s settlement: “It was the first time I came to a larger Eskimo family, and the patriarchal relationship impressed me greatly. Ava was the unrestricted landlord who controlled everything and everyone, and the mood in the house was struck by the playful and cordial way in which he and his wife addressed each other and commanded their housemates.”

Another of the expedition participants writes: “Between Ava and his wife Orulu exist a rare, beautiful relationship. These are people you will immediately like, without hesitation, straightforward and with open arms they will meet you.”

These two, the shaman and his wife, became some of the expedition’s best guides, whether it was in telling old legends and tales or the way of life and customs of the day.

What Knud Rasmussen learned about Iglulingmiut intellectual culture through these two later formed the basis of his work among the Canadian and Alaskan Inuit.

A story about walruses

Knud Rasmussen tells about a walrus hunt with Ava.

The two hunters were absorbed by old hunting memories with which they entertained each other while waiting for prey, just as they often exchanged hunting stories at home on the bench in Ava’s snow house complex.

One day Ava told Knud Rasmussen about an unusual experience he had. Once, while sitting outside his snow house with his wife and daughter, an ice floe came by with four large walruses.

Ava described the unusual sight with painterly gestures and Knud asked if he could draw the scene. Paper and pencil were presented.

An hour passed during which Ava sat thoughtfully with the pencil. Then he handed it back, saying he would rather cut the motif out of a walrus tusk, because it would be easier.

Six months later, Knud Rasmussen was presented with a carving that reproduced the described episode: four walruses, a male and three females, drift past on an ice floe, while Ava with his wife and child sit and watch from the land. The hunter Ava looks at the animals through a long telescope.

The work is carved in walrus tusk, a material that Inuit at different times and in different places have used for artistic purposes.

In Iglulingmiut culture, the walrus was a very important animal of prey. Meat was eaten, but it was also indispensable as dog food.

The tusks and teeth were used to carve various tools and artifacts including the indispensable snow knife that was used when building snow houses.

This carving was specifically made for Knud Rasmussen to illustrate a particular event. It expresses a social realistic motif. The animals and persons are pictured as accurately as possible. You can even recognize the Iglulingmiut distinctive women’s suit by the pouches at the ankle. The male walrus protects one of the females with his huge tusks.

The big animals protecting the little ones are today a favourite motif of Canadian Inuit artists, but for Ava it might just have been what he saw when he looked at the walruses on the ice floe through the telescope.

Through the three-dimensional form, Ava used the tradition of image cutting. But was illustrating an actual incident and using it as realistic information in an artistic work also part of the tradition? I can’t help thinking about how much of what we call magical art and cult toys in fact belong to the same realistic motif as Ava’s carving.

The Journal of Knud Rasmussen

In Zacharias Kunuk and Norman Cohn’s film “The Journals of Knud Rasmussen,” you follow Ava and his family’s travels to the snow house village of Igloolik, along with Peter Freuchen and Therkel Mathiassen.

In Igloolik, a new Christian-inspired religion has emerged, guided by the shaman Uming, and Ava is pressed to convert to the new religion.

One of the highlights of the film is where Ava says goodbye to his wailing helping spirits. It is an irrevocable break with tradition and the continuity of his previous social and cultural life.

When Knud Rasmussen meets Ava for the second time, this conversion has taken place. However, it turns out to Rasmussen’s advantage, because Ava was now willing to reveal all that he had previously held hidden. A practising shaman may not reveal too much without weakening his relationship with the invisible forces. 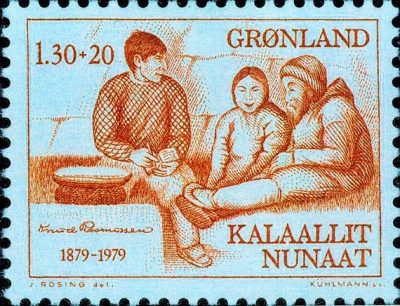 The stamp made by the Greenlandic artist Jens Rosing. From left: Knud Rasmussen, Orulu and Ava. (Image courtesy of POST Greenland)

On the 100th anniversary of Knud Rasmussen’s birth, Greenland’s postal service issued a stamp showing him in conversation with Ava and Orulu, designed by the Greenlandic artist Jens Rosing. In the drawing, Knud has borrowed Orulu’s place closest to the soapstone lamp, so he can see while taking notes.

The stamp found its way to Canada and one day an excited person knocked at the door of the hunter Uyarak, Ava and Orulu’s son. It was Uyarak’s neighbor Hugh Lloyd, who had just received a letter from Greenland bearing Jens Rosing’s stamp. Uyarak recognized both his parents and the episode because he lived in Ava’s snow house complex at the time when Knud Rasmussen stayed there.

Hugh Lloyd said that this unexpected meeting with the past made a big impression on the old hunter.