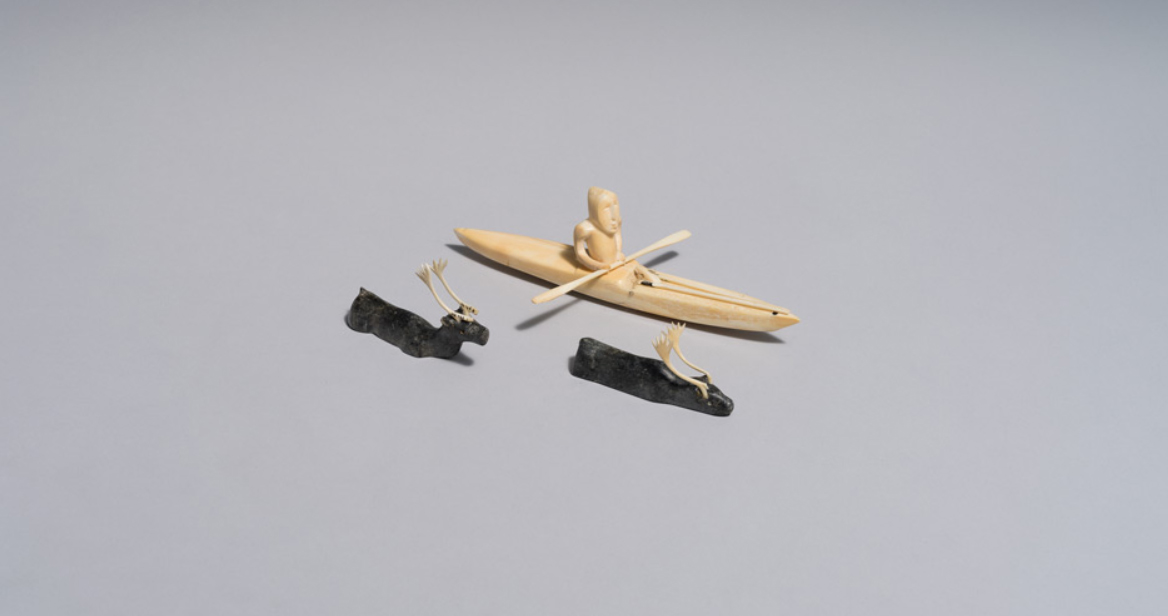 Man and Kayak with Two Swimming Caribou, by Ulilak, was carved in ivory and stone in 1959. The piece is now on display as part of the Winnipeg Art Gallery’s new exhibit of miniature carvings. (Image courtesy of the GN/WAG)

A new exhibit of Inuit art seeks to prove that bigger is not better.

An exhibit of more than 100 miniature carvings by Nunavut artists just opened at the Winnipeg Art Gallery.

Small Worlds: Inuit Miniature Carving opened on July 20 at the Winnipeg gallery. The pieces were created between the 1950s and 1970s by Inuit artists across Canada’s eastern Arctic, and are on loan from the Government of Nunavut’s fine art collection.

This is the first exhibit curated by WAG’s new assistant curator of Inuit art, Jocelyn Piirainen, who is originally from Cambridge Bay.

Piirainen said she was looking through the GN’s collection when she noticed a large number of tiny carvings, many of which reflected traditional Inuit activities.

“Many of these miniatures also reflect the everyday busyness of Inuit including that of men hunting seals, fish or whales—or of women scraping sealskins or tending to the qulliq,” Piirainen said in a news release.

“These scenes then create small worlds where stone and bone become the landscape, and the stories and livelihood of Inuit are told by these miniature carvings.”

The tiny carvings can also represent a specific time in the history of Inuit art. Carvers would often create miniatures to trade for necessities and other items, or to be sold at Hudson’s Bay Company posts or cooperatives.

In other instances, miniature carvings of animals were created to bring good fortune to harvesters, the news release explained.

The exhibit comes in the lead-up to the opening of the WAG’s Inuit Art Centre in 2020.

The gallery’s assistant curator of Inuit art position is funded through the Canada Council of the Arts and is the first such position in Canada held by an Inuk.