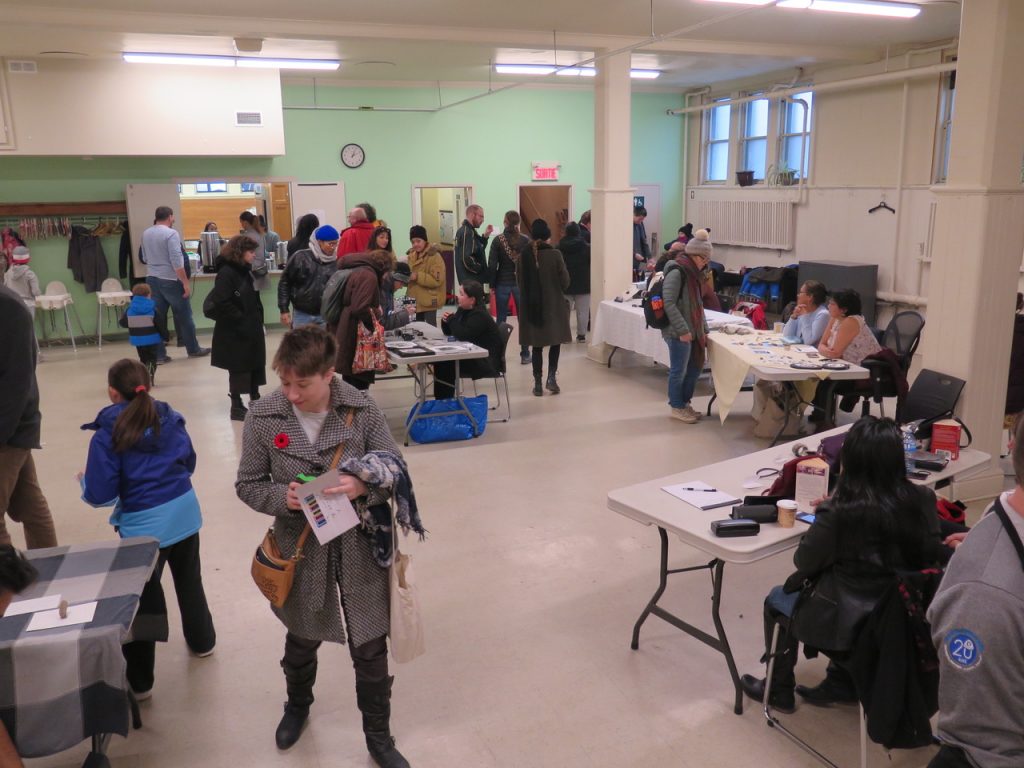 The Southern Quebec Inuit Association held its first Inuit craft fair in Verdun, a borough of Montreal, on Nov. 9. (Photo by Charlotte Glorieux)

The event, held on Nov. 9, saw around a dozen kiosks displaying crafts in the basement of the Church of the Epiphany.

Tea and bannock were served to the crowd coming in from 10 a.m. to 4 p.m. It was Christmas shopping time, and many were hoping to get a head start on their list. 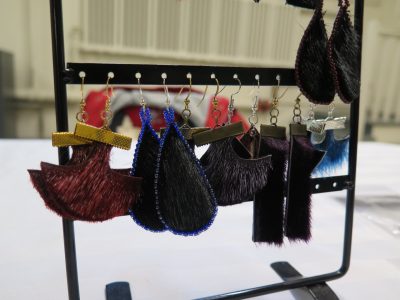 Pasha Partridge, a young Inuit woman from Kuujjuaq and Kahnawake, sold her hand-made jewelry. From earrings to necklaces and bracelets, each piece is unique, made up of sewn coloured beads and sealskin scraps. She was pleased she had sold almost everything she had brought.

Some of her accessories are more time-consuming to make than others. “It takes me an hour for the necklaces, and about 15 minutes for the bracelets,” she said. “I try to find a piece of fur that already has the shape of a band, and I attach a bracelet clasp to it.”

She said she finds her scraps of fur by messaging people on Facebook, “but it can be difficult.” She sells her jewelry pieces through her Facebook page, Pasha’s Project. 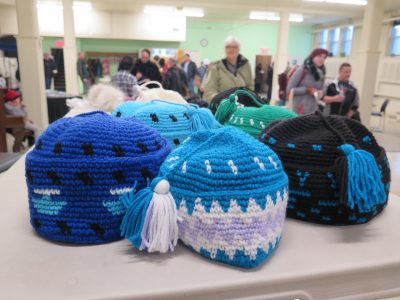 At a nearby table, Naimee Veevee from Pangnirtung sold traditional crocheted hats. “Each one takes about three and a half hours to make if you are good,” she said laughing. “If you are not good, it can take four days.” She makes them herself and sends them to her kids who live in Nunavut.

“They know how to make them, I taught them,” she said. She also makes mittens using animal fur. She proudly explained that she had just sold a mother a pair with a string attaching both mittens, “so the child won’t lose them.”

Veevee said she doesn’t usually sell her accessories, but she felt it was important for her to be here, to spread her knowledge. 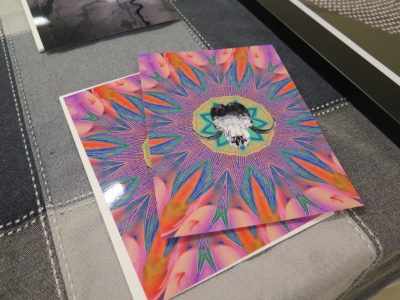 Next to her, Gabriel Nuraky Koperqualuk, a visual arts student from Concordia University, showed his works of colourful computer-generated art.

“It’s all digital, so I start with a photo, and then I run it through a couple of apps on my phone, and then into Photoshop,” he explained. “On the computer, I can blend the picture with other photos, change the colours, the composition.”

“They’re pretty quick to make.” He believes that it is the freedom of the medium he has chosen that drives his work. “Since it’s digital, I can always go back.”

Koperqualuk, whose family hails from Nunavik, explained that his artwork makes him think about what it means to be Inuit.

“When I do this, I think about who I am, where I am from,” he said. “I’m an urban Inuk, I was raised in Montreal, but my family is from the North. This is a new way of creating Inuit art that’s just starting up.”

He said he chose the digital medium because he has “a very short attention span.” The regular exhibitor explained that he tries to sell his art in person, “but it’s usually a hit or miss with these types of gathering.”

Asked why it was important for him to be here today, Koperqualuk said, “It’s simply being part of this new movement of urban Inuit identity. In every major city in Canada, there are Inuit. With that, there is new art, new music. It’s a new identity.”

His art can be found on Instagram and Facebook with the handle “Nuraky Designs.” He is hoping to sell printed sweaters in the near future.

Tina Pisuktie, the executive director of the Southern Quebec Inuit Association, said the organization hopes to hold a similar event for the Christmas shopping period next year.