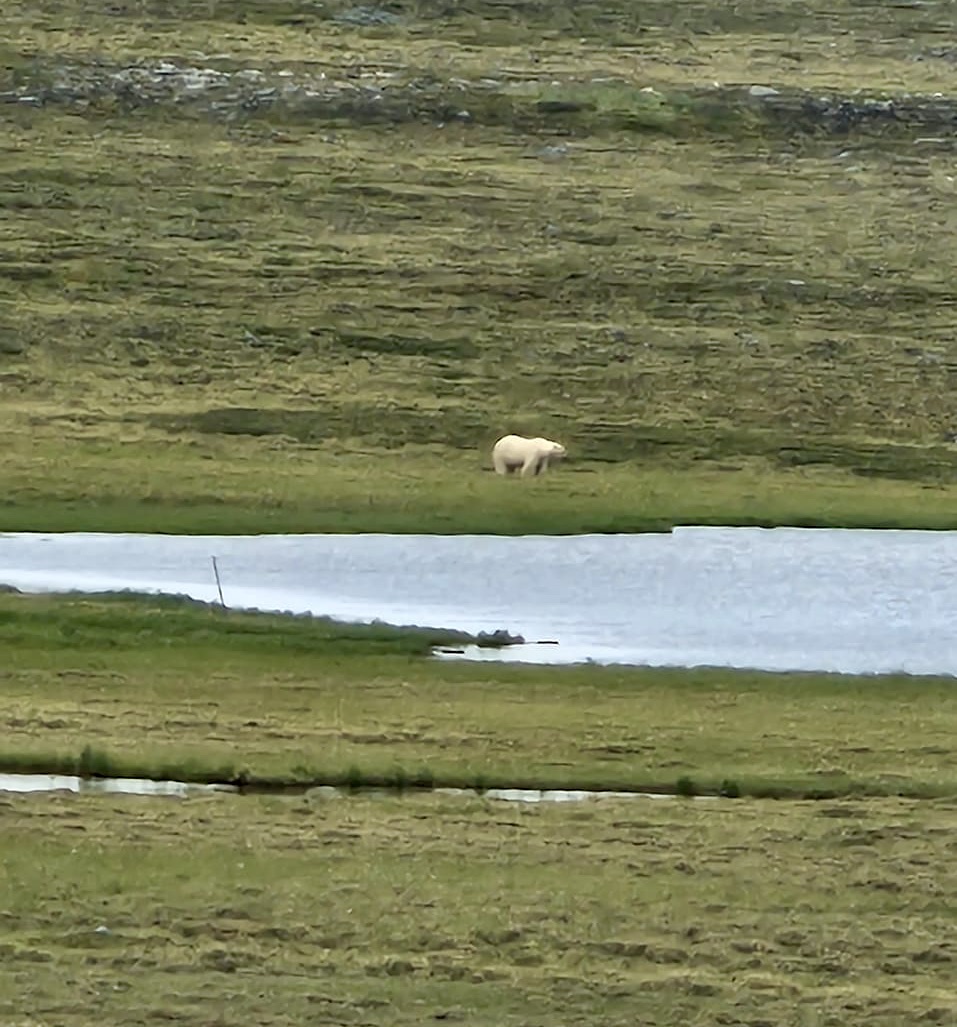 Several polar bear sightings were reported in Rankin Inlet on Thursday, one day after a woman narrowly escaped a close encounter with one in town.

Hunters and Trappers Organization manager Andre Aokaut said there are currently “multiple bears within [the] area” and that residents have reported seeing bears “just on the outskirts of town, a couple of bears within that limit.”

He also said that a bear that resident Joan Tugak came face-to-face with early Wednesday near the Quickstop store tried to come back into town later that night.

Aokaut added the HTO has a person serving as a bear monitor, using a boat to check out the islands, looking for the bear that came to town Wednesday.

Brenda Aupilarjuk told Nunatsiaq News she spotted a polar bear at 10:30 a.m. Thursday between Landing Lake and Sandy Lake, near Rankin Inlet, when she and her brother took a drive up the road.

She took some pictures and posted them to the Rankin Inlet News Facebook group. Aupilarjuk said her brother spotted another bear around lunchtime.

Aokaut said if a bear is not aggressive, conservation officers will first try to chase it away rather than killing it.

“There are a couple options before destroying the bear,” he said.

The HTO met Thursday to discuss the influx of bears into the community, Aokaut said. They’ve decided to hire four new bear monitors who will begin looking out for bears as soon as possible.

He added that he’s been told that people in Arviat, about 200 kilometres south of Rankin Inlet, have also reported seeing bears close to town.

Aokaut said for now, the hunting season will still start in November as usual because the hamlet has a limited number of tags, but if the issue persists it could open a few weeks earlier.

“Hopefully that should scare out all the bears that are in the area. As of right now, we’re chasing them away if they’re not a threat, or trying to keep them on the outskirts of town [because] a lot of people have cabins,” he said.

If people in the community spot a polar bear, Aokaut said they should contact the conservation office first, and if one can’t be reached then people should call the HTO.

“I just came back from a sighting this morning on the outskirts of town, but a little too close for comfort for a lot of people,” he said. “We managed to scare it off continually south, but then I just got another call a few minutes ago, saying there’s another bear at another spot at another location.

“We’re kind of busy at the moment.”