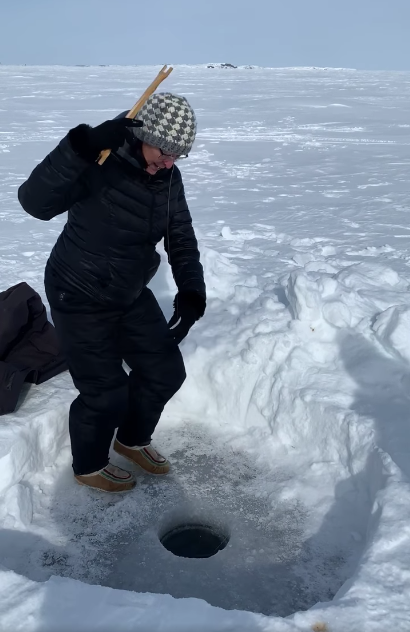 Rita Pigalak does a jig around an ice fishing hole in her video entry for the Nattiq Frolic’s virtual jigging contest. (Photo provided by Rita Pigalak)

‘Frolics is all about getting outdoors, and the weather gods are co-operating,’ says organizer

The annual Nattiq Frolics kicked off in Kugluktuk on Monday to celebrate the arrival of spring, after a year of cancelled festivals and community gatherings in the community.

Kugluktuk Mayor Simon Kuliktana said after pandemic-related restrictions put a stop to last year’s Frolics, he considers this year’s event even more of a success.

He said he can sense the excitement in the community, such as on Tuesday, when he listened to kids about to partake in a snowmobile race — one of the first events of the week.

“You can feel their adrenaline as they chat with each other before the races, knowing their family and friends are watching,” he said.

He said everything came together thanks to the group of volunteers who “somehow have found a way to work within the restrictions to make this happen.”

The festival is happening out on the ice this year instead of indoors, but Nadene McMenemy, one of the organizers, said that’s fine.

“Nobody wants to be indoors,” she said.”

“The world’s been locked up for a year and a half.”

There are other changes. The community-wide bingo will take place on the radio instead of at the community centre. The crib tournament and live music can’t happen this year, “but we’ve made up for it with other stuff,” McMenemy said.

A bazaar will take place outdoors on Saturday with tables set up at a distance for seamstresses to sell their work face-to-face for the first time in over a year. Instead of the annual feast that usually takes place in the community centre, McMenemy made 400 cups of chili to serve out on the ice with bannock.

Some events have moved online, like a virtual talent show and a jigging contest done through video submissions, which can be found with the hashtags #frolicstalent and #frolicsjigging.

This isn’t the community’s first time adapting events to pandemic times — they also found a way to come together virtually during the last Christmas holidays. 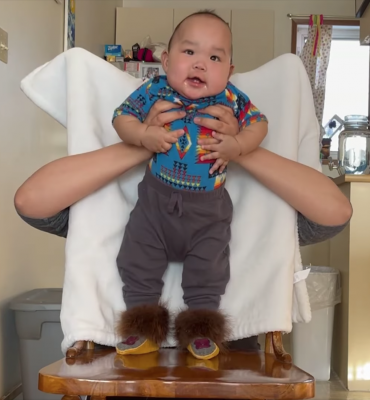 Events run April 12 to 18 and so far, the weather has been beautiful, according to McMenemy.

“Frolics is all about getting outdoors, and the weather gods are co-operating,” she said.

Other events throughout the week include kids bingo with a new bike as the grand prize, snowmobile races, and a tea and bannock-making contest — with a prize for the fastest-made and best-tasting bannock. McMenemy said local fishermen drilled holes in the ice for people to fish as well.

Events will ramp up on the weekend, with a seal hunt on Saturday and a snowmobile parade on Sunday.

Throughout the week, community seamstresses are working on individual quilt squares to be sewn into a quilt to hang in the community centre to celebrate the festival’s 45th anniversary in 2022.

McMenemy said quilt squares are already coming in. One family’s square depicts a seal hunt, another shows traditional clothing and a third includes butterflies to honour the seamstresses’ late daughter, she said. 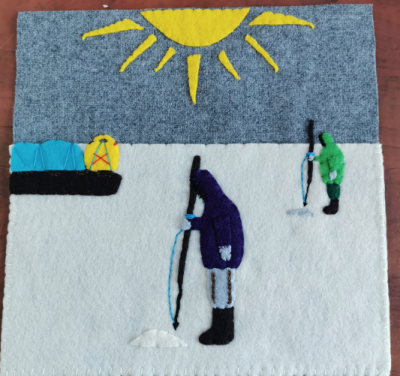 “They all have a meaning to them, that’s what makes it so special,” McMenemy said.

On Friday night, the names of three seamstresses who submitted quilt squares will be drawn for prizes, including a new sewing machine.