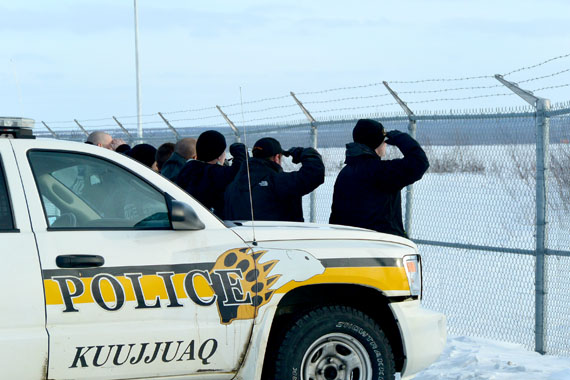 Nunavik police officers are seen in this March 2013 file photo saluting a plane carrying the body of Const. Steve Dery as it departs from Kuujjuaq. Nearly a decade after Dery was killed in the line of duty and a provincial watchdog called for safer working conditions for officers in the region, Nunavik police are implementing a new emergency phone line in four Hudson Bay coast communities. (File photo)

Four communities on Nunavik’s Hudson Bay coast will be the first in the region to be connected to a new emergency phone service next year, police say.

People in the North who phone in a police or fire emergency will be automatically connected to an emergency call centre located in Saint-Eustache, Que., said Nunavik Police Service deputy Chief Shaun Longstreet.

A dispatcher there will transmit the information to the local office and an officer will be assigned to respond.

The new system comes as a response to a nearly decade-old call to improve the existing system.

In March 2013, Nunavik police Const. Steve Dery, of what was then the Kativik Regional Police Force, was shot and killed while responding to a domestic violence incident in Kuujjuaq.

That same month, a Quebec government workplace safety watchdog revealed that, by allowing officers to answer service calls themselves, Kativik Regional Government was not following provincial occupational health and safety laws at the time of Dery’s death.

KRG was told it needed to implement a new system to ensure police officers weren’t taking calls that they, themselves, would then have to respond to, Longstreet said.

However, implementation of a new system has been limited by technology available in the region.

“They didn’t specifically say that we needed to have a call centre, but what it said is that we need to ensure that police officers aren’t answering calls for themselves,” Longstreet said.

“All the emergency calls that are answered are actually answered on a standard administrative line that’s forwarded to the police radio if no one answers the call at the station.”

The first communities to be connected to the new service next year are to be Kuujjuaraapik, Inukjuak, Umiujaq and Puvirnituq, though Longstreet said it’s still to be determined exactly when that will happen.

This year, those communities, all in the southwest corner of Nunavik, were the first to be connected to service provider Tamaani’s fibre optic high-speed internet service, which makes the connection to Saint-Eustache much faster. 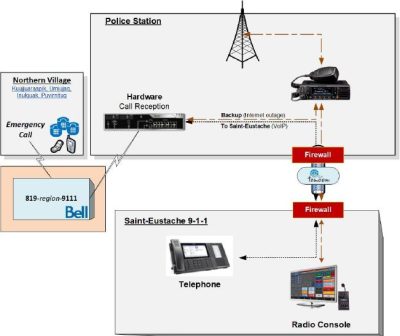 This infographic, included in a presentation delivered by Nunavik police at KRG regional council last week, shows how the new emergency phone system will connect people in four Hudson Bay coast communities to a call centre in the south. (Infographic courtesy of Nunavik Police Service)

This week, Longstreet, Nunavik police leadership and other partners in the implementation of the emergency call line will meet with municipal councils in the four communities to discuss the new system.

Longstreet said the new emergency call centre will also be able to record all the calls that come in and provide a statistical record of the volume and types of calls Nunavik police receive — something the service has been lacking for some time.

“The only stats that we have are the amount of operational files that are actually opened,” Longstreet said.

“We need to gather some stats in order to expand the project everywhere as soon as technology becomes available.”

Last week, he told KRG councillors that the system will also be able record the caller’s telephone number in the event of a bogus report or prank call.

KRG is covering the cost of the new emergency phone system, supported with up to $900,000 available in a reimbursement fund from the Quebec government.

After the new system goes live, and after Tamaani’s fibre optic network is expanded across Nunavik, Longstreet said he hopes to see the new system available in every community.

“It’s really dependent on the funding and the availability of technology,” Longstreet. “The big picture is definitely to be everywhere.”