Works on display include amautis, parkas, sewing tools from across territory 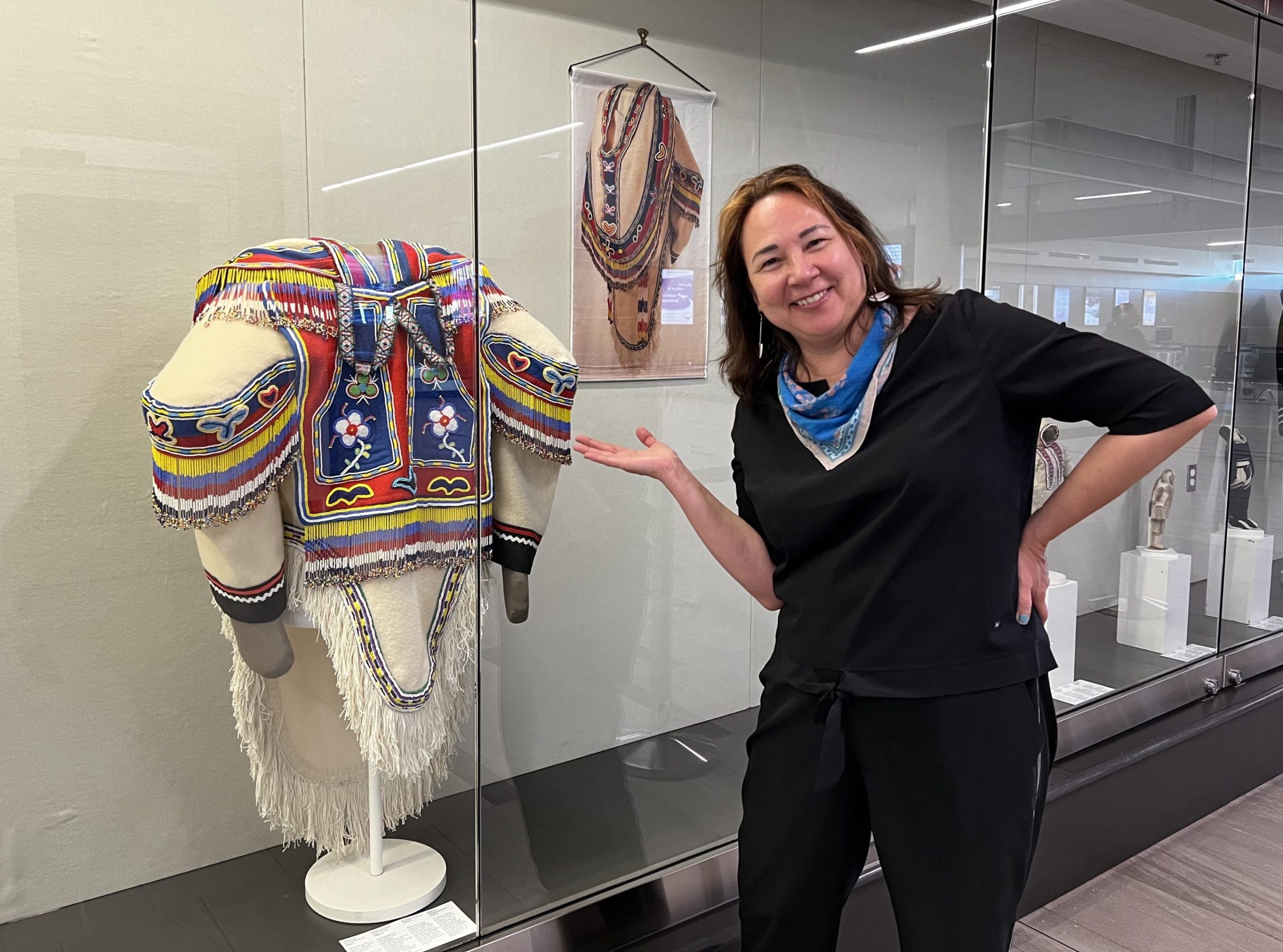 Curator Deborah Kigjugalik Webster gestures to an amauti sewn by Irene Avaalaaqiaq of Baker Lake, one of the works now on display at the Iqaluit airport in an exhibit celebrating Nunavut seamstresses. (Photo by Madalyn Howitt)

Travellers passing through the arrival wing at Iqaluit’s airport this week will be among the first people to see a new art exhibit honouring Nunavut seamstresses.

Carefully sewn parkas and amautis, and the sewing tools needed to create them, are some of the pieces selected by curator Deborah Kigjugalik Webster.

The installation shows artworks from Nunavut’s three regions — Qikiqtaaluk, Kivalliq and Kitikmeot — with information about each piece written in Inuktitut, Inuinnaqtun, English and French.

Some of the pieces include several handmade doll parkas, a caribou fur used in the film The White Dawn (1974), traditional sewing needles and a thimble made from sealskin.

A few of the items are still unidentified, so Webster is asking the public to contact her if they have any information about the artists or where the pieces came from.

“We can add that information to our database and it’s there for other people to appreciate,” she said.

Some of the works representing Nunavut seamstresses now on display at the Iqaluit airport include a small parka by an unidentified artist (left), a hand-crank Singer sewing machine and other sewing tools that were often used to sew parkas and amautis. (Photo by Madalyn Howitt)

All of the artwork on display is part of the Government of Nunavut’s collection with the Culture and Heritage department. Down the hall from the seamstress exhibit will be a complimentary display of three Canada Goose parkas from Project Atigi and designer Victoria Kakuktinniq, of Rankin Inlet.

Choosing a favourite piece in the exhibit is difficult, Webster said, but she particularly loves the bold colours and intricate beadwork of the centrepiece, an amauti by Irene Avaalaaqiaq of Baker Lake.

Webster said she also has a special connection to the Singer sewing machine on display that once belonged to her great-grandmother, Martha Kigjugalik, who was a great seamstress.

“People remember these hand-crank sewing machines. They were very practical when people had no electricity, and they’re part of what you need to make all these garments,” Webster said.

Soon after the final touches were put on the display Tuesday afternoon, she noticed travellers were already stopping by and taking photos.

“A man came by this morning from Arctic Bay and said, ‘We had a sewing machine like that made in 1906,’ and he loves that Singer sewing machine and it still works,” she said.

“I think it’s great. People are taking the photos and talking about it and asking about it.”

This is Webster’s first exhibit for the Culture and Heritage department, which took six months to curate.

While it wasn’t installed specifically for Friday’s visit to the city by Pope Francis, Webster said the timing is ideal.

“I wanted this exhibit set up before the Pope arrived so that more people can see them here passing through,” she said with a laugh.