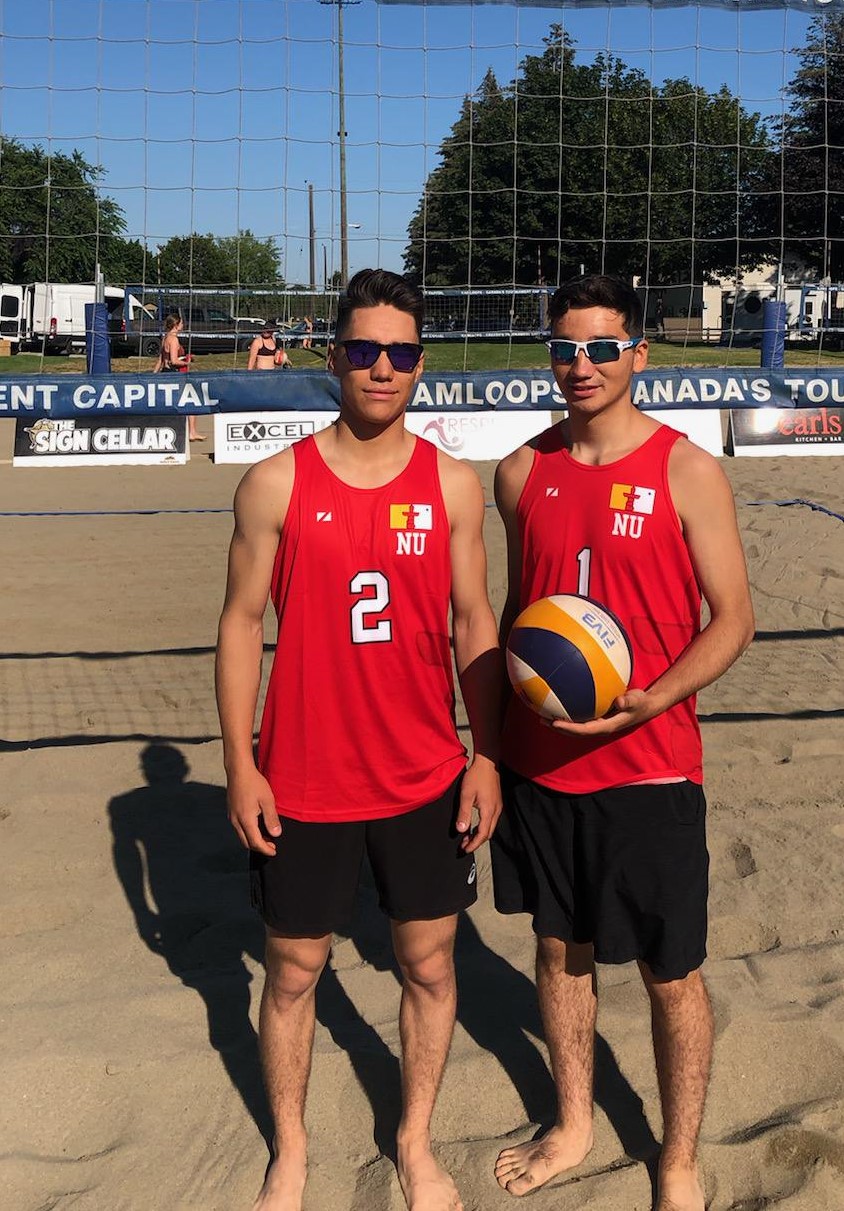 No sand, no problem for Team Nunavut beach volleyball players

They’re the beach volleyball team without a beach.

And for the first time, Nunavut will send them to compete at the Canada Summer Games, which open Aug. 6 in Ontario’s Niagara region.

With no sand volleyball court anywhere in Nunavut, the territory’s beach volleyball players practise in a school gym. They’re part of an open volleyball league, and play two-against-six.

The only sand they see is when they travel out of territory for tournaments or, occasionally, down south to train. Even their coaching has been done virtually for the most part, with training programs sent to Nunavut.

What the players lack in advantages, they make up for in discipline and determination.

“Bottom line is, these are very directed athletes,” says Rob Tomyn, who lives in Saskatchewan and coaches Nunavut’s men’s and women’s teams.

“So when they organize their volleyball nights in Iqaluit, there’s nobody organizing it for them. It’s them doing it themselves, and getting better on their own.”

He adds: “They’ve earned every ounce of recognition that they get.”

Without the extras other teams benefit from — such as sand — there’s “definitely” a feeling of being the underdog, says Ian McDonald, who is paired with Aiden Anawak on the men’s team. Talia Grant and Shawna Kyak comprise the women’s side.

“Obviously, we don’t play beach volleyball (in Nunavut),” says McDonald. “And if you look at the height of everybody else, we’re definitely smaller than everybody.”

Beach volleyball has a party atmosphere for the fans. There’s beach-style music playing, it’s outdoors and sunny, people are wearing shorts and flip-flops.

For the players, “the physical demands … are quite a bit more significant [than indoor volleyball], because you’re always touching the ball at least every time that ball comes over the net,” says Tomyn. 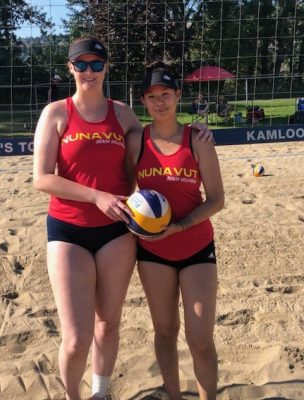 Talia Grant, left, and Shawna Kyak will compete in beach volleyball for Nunavut at the Canada Summer Games. (Photo courtesy of Team Nunavut)

“Whereas with indoor volleyball, you can go multiple rallies without even touching the ball. So there’s no hiding any weaknesses in beach volleyball — you have to pass, you have to attack, you need to do it all. There is just no specialization because there’s only two people on the court.”

Never mind the sunburns, the sand burns, heat exhaustion and buckets of sweat it takes out of them.

To prepare for the hot Ontario weather, the beach volleyball teams trained in Halifax for a week in late June, then moved to British Columbia for the Volleyball BC Beach Provincials.

Temperatures there reached 35 C. Between matches, courts were sprayed with a fire hose to cool off the sand.

“I don’t want to know how much money we’ve spent on Gatorade on this trip, but it’s a lot,” says Tomyn.

Chemistry between partners is a big part of beach volleyball.

McDonald, who also plays elite-level soccer, is from Iqaluit, while Anawak moved to Iqaluit from Rankin Inlet in 2016. They’re both 22, and met in their final year of high school.

“Two-on-two is very different, and it helps that Aiden and I are really close, best friends at home,” says McDonald. “We play a lot of volleyball together, so we know each other really well.”

Nunavut debuted its beach volleyball teams in 2019 at the Western Canada Summer Games. Tomyn credits Scott Schutz, of Volleyball Nunavut, for driving that as a new sport to compete in.

McDonald, who is studying environmental technology at Nunavut Arctic College, figures this will be his last big beach volleyball tournament.

He wants to get into coaching, hopefully in time for the North American Indigenous Games next year.