No wins for Nunavut men’s volleyball, but ‘fun’ memories at Canada Games 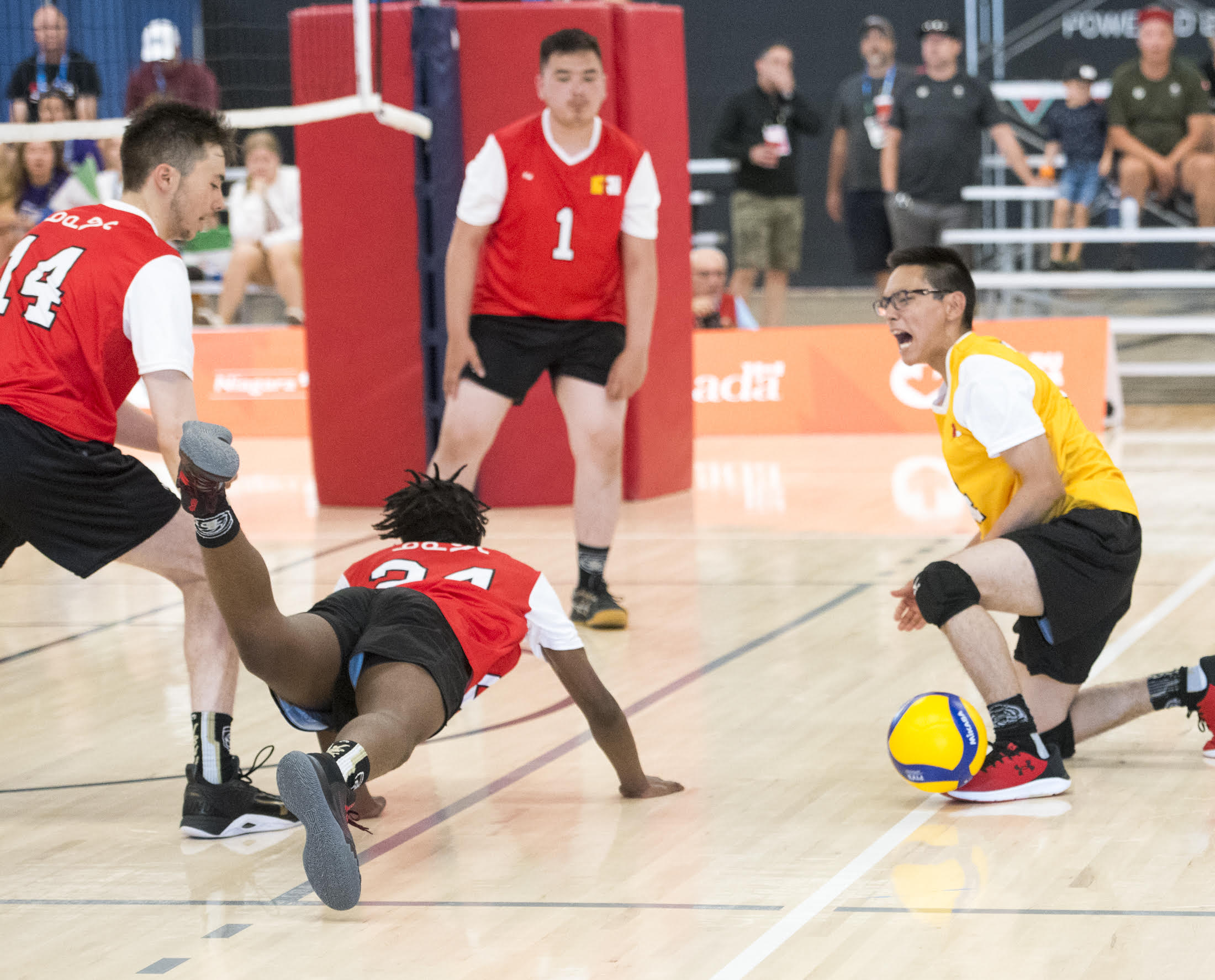 Team Nunavut’s men’s volleyball team tries to rally after opponents Team Yukon score a point against them in Game 3 Thursday at the Canada Summer Games in Niagara. (Photo by Denis Cahill)

Another 3-0 loss wasn’t the result Nunavut’s men’s volleyball team hoped for in their final match at Canada Summer Games, but the coach and players are celebrating their achievements nonetheless.

This is the first time Nunavut is competing in team sports at the summer games and organizers have said at this point it’s more about gaining experience than expecting to win.

Team Nunavut took on the Yukon squad on Thursday for the final game of their round-robin tournament, and they proved to be Nunavut’s toughest opponents yet on the indoor volleyball court.

Yukon surged to a 9-1 lead early in Set 1 and kept up the pace throughout, finishing the set with a commanding 25-12 win.

Nunavut came back stronger in Set 2, making some quick passes and keeping the score close until midway through the round. But it wasn’t enough to overtake Yukon, which closed out the set with 25-17 win.

In Set 3, Nunavut struggled to hit double-digits on the scoreboard despite some strong spikes from offside player Evan Kyak, and the team conceded another 3-0 defeat after closing the set at 25-12.

“They were a well-prepared and a well-coached and very good team, so they definitely challenged us in parts of the game today,” said Nunavut coach Brady Fischer of their fellow northern opponents.

He said in future games, he’d like to see the team work on its consistency.

“We’ve had good moments in each match,” he said. “We were competitive in different sets with different opponents and it’s just about putting that all together for an entire match now and trying not to dwell on some of the low moments of the game and [instead] celebrate the high moments in a game.”

Carter Poinek, who plays the defensive position of libero on the team, said it felt good to be representing Nunavut as it competes for the first time in men’s volleyball at the Games.

“It’s pretty crazy, the feeling still hasn’t sunk in. It’s been a lot of fun and a good experience. We’re happy to be here,” he said.

“I think we played OK, but we could have done better — we were sloppy in a lot of areas of our game.”

He agreed with Fischer that they played their best in their matchup against Newfoundland and Labrador on Wednesday.

Reflecting on his experience at the Games so far, Pointek said he most enjoyed meeting new people and having fun on the court.

He said he hopes he and his teammates were able to inspire friends, family and fans back home to go after their dreams too.

“They can do anything they want to. We’ve come this far with volleyball, I’m pretty sure they can go as far as they want with their dreams. Just work hard and keep your mind focused. Do whatever you can,” he said.

Thursday’s loss brings the three-game round-robin tournament to an end for the men’s team (Northwest Territories does not have a men’s volleyball team at these Games, so it’s a three-team division).

Now Nunavut will wait to find out when they’ll play one final game to determine where they’ll place in the final team rankings.

Meanwhile, Nunavut’s women’s indoor volleyball team was scheduled to play their third game at 4 p.m. ET Thursday against Yukon. They’ll follow up with Game 4 against the Northwest Territories on  Friday at 9 a.m. ET.

They are also winless so far at the games, which are being held around Ontario’s Niagara region and wrap up Sunday.