“The way we see our land may be very different from the way that Ottawa sees it.” 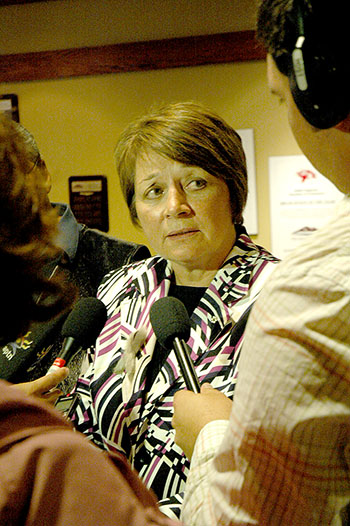 Mary Simon, the president of Inuit Tapiriit Kanatami, speaks to reporters Aug. 19 after a meeting with Prime Minister Stephen Harper in Iqaluit. (PHOTO BY MELISSA IRWIN/ITK)

I live in Kuujjuaq, Nunavik’s largest community, located on the western shore of Quebec’s Koksoak River, about 50 kilometres upstream from Ungava Bay.

Along with my birthplace, Kangiqsualujjuaq to the east, Kuujjuaq sits almost directly on the 58th parallel. It has what might be described as the geographic misfortune of being situated just south of the 60th parallel at a time when federal officials are directing their gazes north of 60.

We saw this most recently last month with the announcement of the federal government’s Northern Strategy, when 19 Inuit communities were inexplicably left off a map of Canada’s Arctic released as part of the Strategy. We saw it also with the earlier announced Northern Economic Development Agency, the plans for which also notably exclude the Inuit regions of Nunavik and Nunatsiavut.

This week, as Prime Minister Stephen Harper tours Canada’s three territories, I hope that he will correct this anomaly.

“Whose North is it, anyway?” asked Thomas J. Courchene last week, writing in the Ottawa Citizen. The answer, quite plainly, is that it is ours. It is the Inuit homeland and life-giving force. But we are constantly reminded that the way we see our land may be very different from the way that Ottawa sees it.

Inuit have inhabited the land occupying the northern edge of the treeline for thousands of years, and only relatively recently has our homeland been divided into political jurisdictions. We call this land, stretching from the northernmost communities of the Northwest Territories, to Nunavut to the communities of northern Quebec and Labrador “Inuit Nunangat.”

Inuit Nunangat encompasses lands and waters that are governed by a diversity of jurisdictional arrangements, including federal, provincial, territorial, regional and aboriginal governments. That is precisely why we need this new comprehensive strategy tying together a series of previously announced programs and policies in a jurisdictionally complex zone.

Canada’s four Inuit land claims regions form a continuous chain defining Inuit rights and jurisdictional arrangements across the Canadian Arctic. We deserve to be consulted on programs and policies affecting our lands and our lives.

For this reason, I believe the four priorities outlined in the strategy (sovereignty, socio-economic development, environmental sustainability and devolution) must be accompanied by a fifth priority — strengthening the relationship with the Arctic’s historic residents.

This relationship should be the core of everything that is being attempted in the Arctic. After all, as the Strategy document points out, Canada’s strong presence in the Arctic is “due in large part to contributions of Inuit.”

I must give credit to the Prime Minister. His government has placed a greater priority on the Arctic than any previous government in the post-Diefenbaker era.

As he tours the Arctic once again, visiting the Nunavut communities of Iqaluit and Pangnirtung, I hope that he will see not a desolate and barren land, but vibrant communities, proud Canadians. His investments in the health and socio-economic well-being of Inuit are investments in Arctic sovereignty.

He knows also, that for his strategy to ultimately be successful, it must be accompanied by immediate action. Its schedule for completion should be long enough to shape events and see results and short enough to acknowledge the degree and depth of unknowns. It should extend beyond short-term, partisan considerations to the extent possible, but also provide for near-term, concrete priorities.

In the spirit of immediate action, I urge the Prime Minister to heed the call of Canada’s Premiers and National Aboriginal Leaders this month for a comprehensive, transparent, meaningful federal-provincial-territorial and aboriginal process to explore the place of aboriginal peoples in our federation in the next 25 years.

And I ask him to take pleasure in his Arctic travels and gain a keen appreciation for Inuit hospitality. Perhaps he will dance a jig or two at a community feast, even sample some fresh seal. Most of all, I hope that he will commit to working with the people of Inuit Nunangat on our common goal — a stronger Canada.