Visit nunatsiaq.com for real-time results, breaking news from across the North 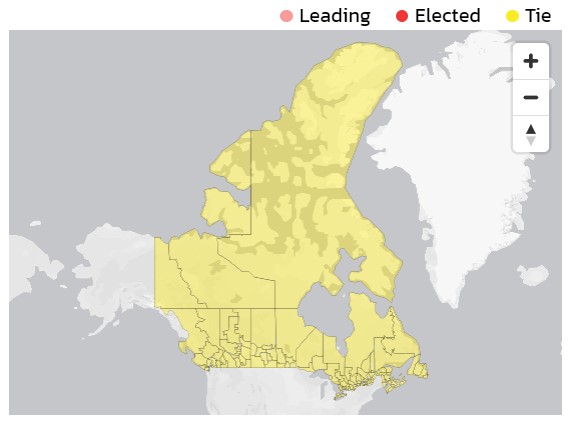 This map is wide open on Monday, but once polls close at 9:30 eastern time, it will start to fill in with the colours of Canada’s political parties. Visitors to Nunatsiaq News will be able to follow results in Nunavut and Nunavik — and the entire country —on an interactive, real-time results map, until a winner is declared and Canadians learn who will form the government. (Photo courtesy of The Canadian Press)

Nunatsiaq News is your source for election news about the North.

Our website will feature an interactive, real-time results map, allowing you to follow the races in Nunavut and Nunavik, the national results, and any other riding in Canada. Results will start appearing shortly after polls close at 9:30 eastern time.

Our reporters will be following the races that directly affect our readers — Nunavut and Nunavik, which is part of the Abitibi–Baie-James–Nunavik–Eeyou riding that covers a big part of the province of Quebec.

We will also have coverage of our neighbouring ridings in Yukon, N.W.T., and Labrador.

We will be sharing on social media key developments in the race, including which party is leading, whether it’s headed toward a majority or minority government, as well as when prominent candidates across Canada win or lose. Follow Nunatsiaq News on our Facebook page and on Twitter.