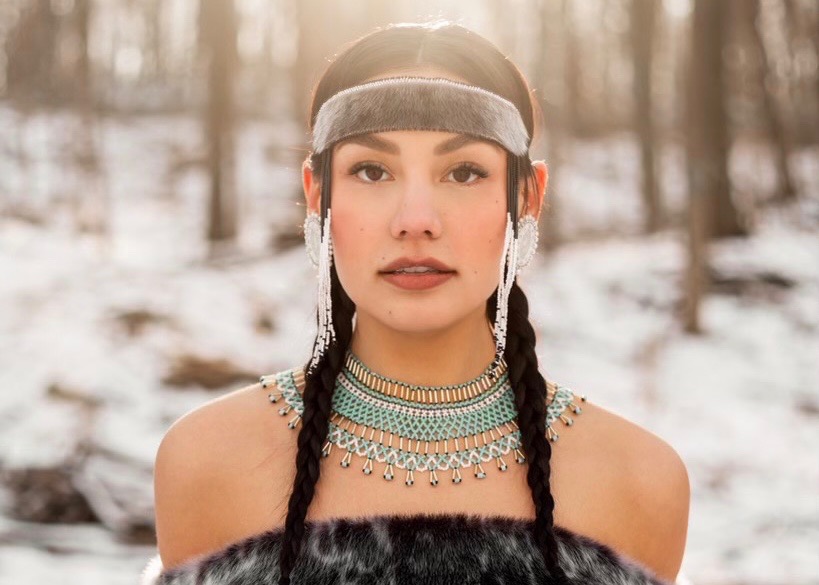 Nunavik-born Shina Novalinga is pictured here wearing a handmade outfit, one of the things she showcases on her TikTok account where she posts videos about Inuit culture. (Photo provided by Rachele Tang)

Just under year ago, Shina Novalinga posted her first video of her throat singing with her mother on TikTok. Now, over 1.6 million people worldwide watch the 22-year-old’s videos about Inuit culture.

Novalinga, who started throat singing around the age of seven after moving to Montreal, said her account took off after her mother, Caroline, had the idea to post a video of them singing together.

At first she was a bit shy to post the videos, she said, but in the end, it was worth it.

“It always brings us joy and we have a stronger connection every time we throat sing,” she said. 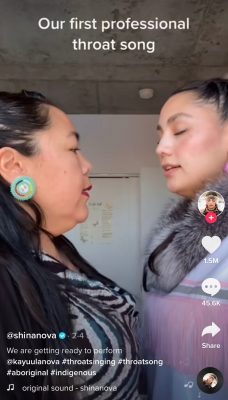 Shina Novalinga throat sings with her mother Caroline on TikTok. (Screenshot from TikTok)

On Sunday, the college student-by-day posted a video sitting cross-legged on the floor and eating raw caribou meat, cutting off pieces with an ulu.

In an earlier video, she shows different traditional outfits handmade by her mother.

Novalinga said other Inuit have reached out to her online, saying people have started to notice their traditional clothing in public.

“They’re happy that more people are acknowledging and appreciating our unique culture because not a lot of people knew about it,” she said.

Novalinga is also working with other Indigenous people now. She’s posted videos with James Jones, a traditional hoop dance artist who goes by @notoriouscree on TikTok.

“Our goal is to definitely have more representation,” she said about herself and other Indigenous people on social media. “Having more people around the world understand our culture and finally having a voice.”

Having Indigenous people seen in the mainstream like this helps youth appreciate their identities and not be ashamed of their culture, said Novalinga.

She said she hopes to sing with other Inuit throat singers she has connected with over social media too.

Amid the positive comments and feedback, she still sees racist jokes and reactions to her videos, she said in a video she posted, addressing someone mocking traditional throat singing on TikTok.

She said having such a large platform and educating people about Inuit culture does come with some pressure.

“I really didn’t know I was going to be the face of my people,” she said.

But, she said she’s grateful she has this platform, which older generations didn’t have.

In December, Novalinga and her mother raised more than $12,400 through an online fundraiser to bring Christmas stockings full of supplies and gifts to Indigenous women at a shelter in Quebec.

She was born in Puvirnituq and moved South to Montreal when she was about five years old, she said.