Nunavik elders eager to be immunized 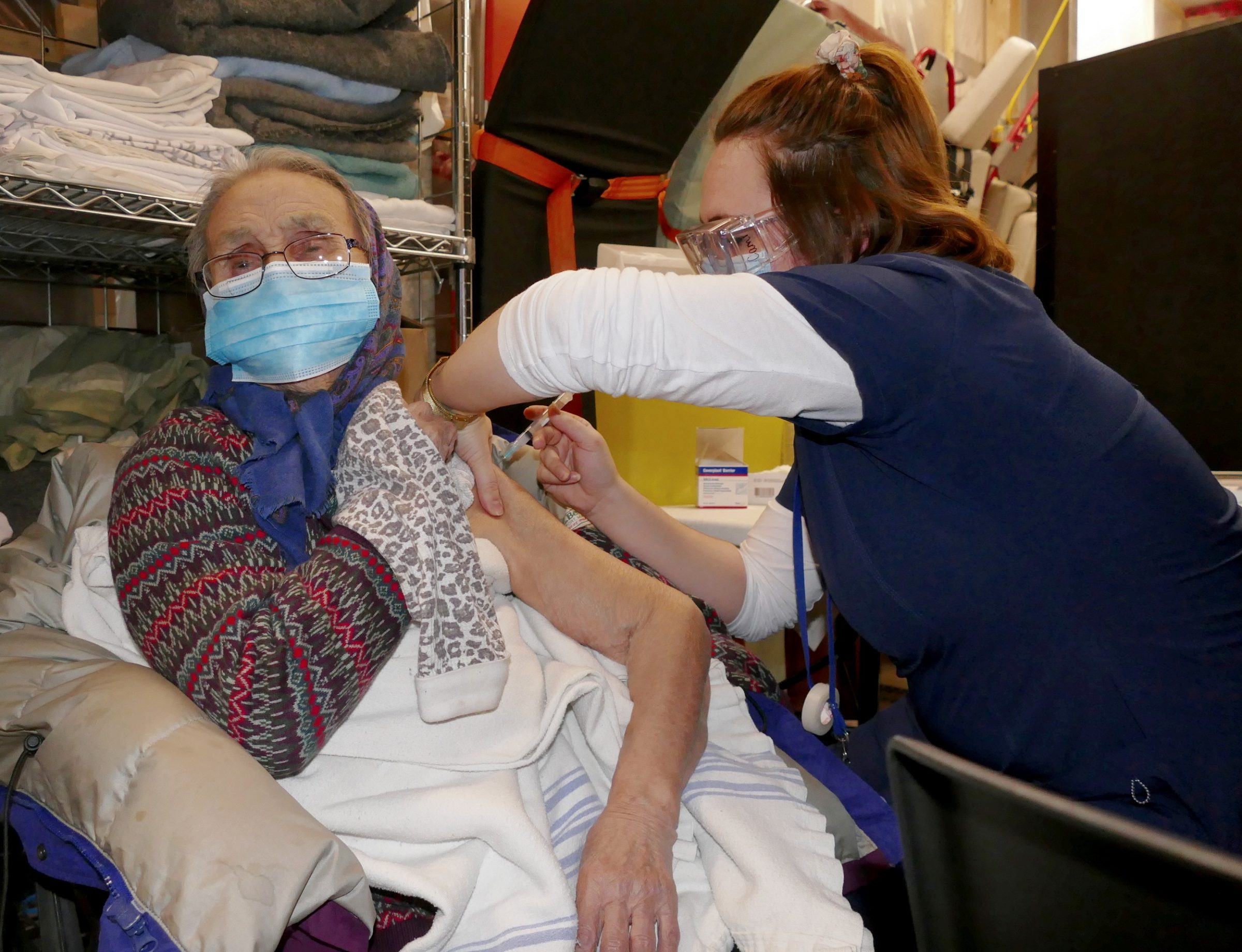 Christina Gordon, 94, was one of the first in Nunavik to receive her COVID-19 vaccination Jan. 19 in Kuujjuaq. (Photo by Allen Gordon)

Nunavik elders are quickly filling up appointments to be immunized, as the region administers its first batch of Moderna’s COVID-19 vaccine this week.

The Nunavik Regional Board of Health and Social Services distributed its first shipment of 1,000 vaccines to all 14 communities on Jan. 16, where they are destined for elders’ homes, health-care workers and Nunavimmiut 70 years of age and older.

Nunavik health officials initially said the region wasn’t in a rush to get its immunization campaign started. Now that it’s underway, the region’s most vulnerable population is eager to get their shots — and it might be experience prompting that response.

Johnny May, 75, received his vaccination Jan. 18 in Kuujjuaq, in a makeshift clinic outside the Tulattavik Health Centre.

“I’m not a lover of needles, but I went there, and I rolled up my sleeve,” May said.

“I follow the news pretty closely and so on, and I was more than 100 per cent ready,” he said. “There was never any doubt in my mind that I would get the vaccination.”

May said he’s heard a lot of skepticism from community members who are wary of the vaccine, largely from a younger generation of Nunavimmiut.

“Elders seem to be more inclined to want to be immunized,” he said.

Allen Gordon said health care workers contacted Nunavimmiut over the age of 70 last week to invite them to come in to be vaccinated. He took his mother, Christina Gordon, to be vaccinated on Jan. 19.

At 94, his mother has lived through a number of deadly outbreaks in Nunavik: measles, whooping cough and tuberculosis.

“When I first mentioned to her that there is the new vaccine, without hesitation, she said, ‘I want to be safe and take it,’” Gordon said.

The very first Nunavimmiut to receive the shot Jan. 17 was Kuujjuaq elder Johnny Watt, 94, a resident at Tusiajiak Elders Home.

In the 1950s, Watt helped deliver the measles vaccines to camps and settlements in Nunavik by dogsled team.

Nunavik’s health board has said that a second round of doses would be distributed in March or April.

Moderna recommends administering that second dose within 28 days of the first.

But due to scaled-back deliveries of vaccine to Canada, the Quebec government said last week that it could only commit to providing a second dose within 90 days.

The health board expects the next batch of vaccines to arrive in the region at the beginning of February. Nunavik’s second priority group to receive the vaccine includes all health-care workers and first responders, adults with chronic diseases and any Nunavimmiut who are older than 55.

By mid-February, the health board plans to open immunization clinics for the general population.