Nunavik elders make up a growing share of region’s population 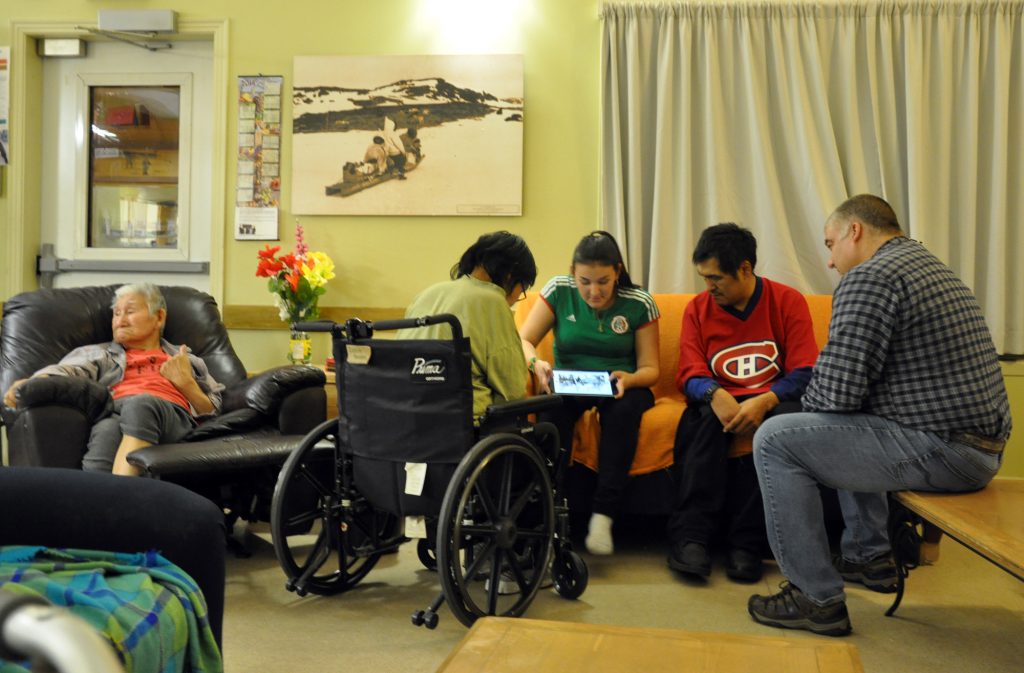 Residents of the Tusaajiapik elders home in Kuujjuaq learn to use iPads in 2014. New research shows Nunavik elders make up a growing proportion of the region’s population. (File photo)

But Nunavik’s seniors are more likely to be supporting their families and living in run-down housing than their counterparts elsewhere in Quebec.

A new report prepared by researchers at Laval University shows that the population of Inuit elders in the region — those aged 65 and over — has more than doubled over the past 20 years.

That means Nunavik elders are growing as a segment of the population at a faster pace than seniors elsewhere in Quebec, noted Laval researcher Sébastien Lévesque.

“We can’t predict the future, but if this trend continues, the elders of Nunavik will occupy an increasingly big share of the population,” Lévesque told Kativik Regional Government council meetings Nov. 23.

Despite that gradual increase, researchers note that the proportion of elders in Nunavik remains much lower than that in Quebec overall — six times lower, in fact.

That’s due to a much lower life expectancy in Nunavik: 67 years compared to 80 years for the rest of the province.

Lévesque said you can also credit that disparity to Nunavik’s high birth rate, which means that children and youth make up a large part of the region’s population.

The report, titled The Elders of Nunavik: A Snapshot of the Socio-Economic Situation, is part of a larger statistical portrait Laval researchers help track for the region called Nunivaat.

The report also found that one in five elders in Nunavik heads a single-parent family, a proportion that is five times higher than in the rest of the province.

Among those single-parent families headed by an elder, 75 per cent are headed by a woman.

Nunavik elders are twice as likely to hold a job than other seniors in Quebec, or to look at it another way, less likely to be retired by 65.

“For some of them it could be linked to the need for a supplemental income,” Lévesque said.

Another glaring disparity: Nunavik elders are eight times more likely to live in unsuitable or overcrowded housing than Quebecers elsewhere.

“We’re a totally different culture from the south — we take care of our households, even our adult children,” said Charlie Arngak, who sits on the KRG’s executive committee.

“But this shows that we need a Nunavik-specific support program for our elders.”

To that end, Laval researchers plan to survey Nunavik elders to gauge their needs in 2021 with the help of the KRG and Makivik Corp.

Laval researchers have also submitted a proposal to the Research Council of Canada to take part in a circumpolar partnership that looks at economic and social inequities across the Arctic and circumpolar North.

The WAGE Partnership (Wealth of the Arctic Group of Experts) would bring together more than 35 members from Arctic nations over a five-year research period.

“What we want to accomplish is try to and understand how wealth is distributed throughout the Arctic, with these different actors,” said Gérard Duhaime, Canada Research Chair at Laval, during KRG council meetings Nov. 23.

“How can we reduce inequalities between households in the North? What kind of changes could we propose to reduce those inequalities? These are the kinds of questions we’ll ask if we get that grant.”