Nunavik hunters have their say on beluga management

“Eliminating quota doesn’t mean there are no rules or regulations. We are trying to say that we would like to base ourselves on our culture and tradition” 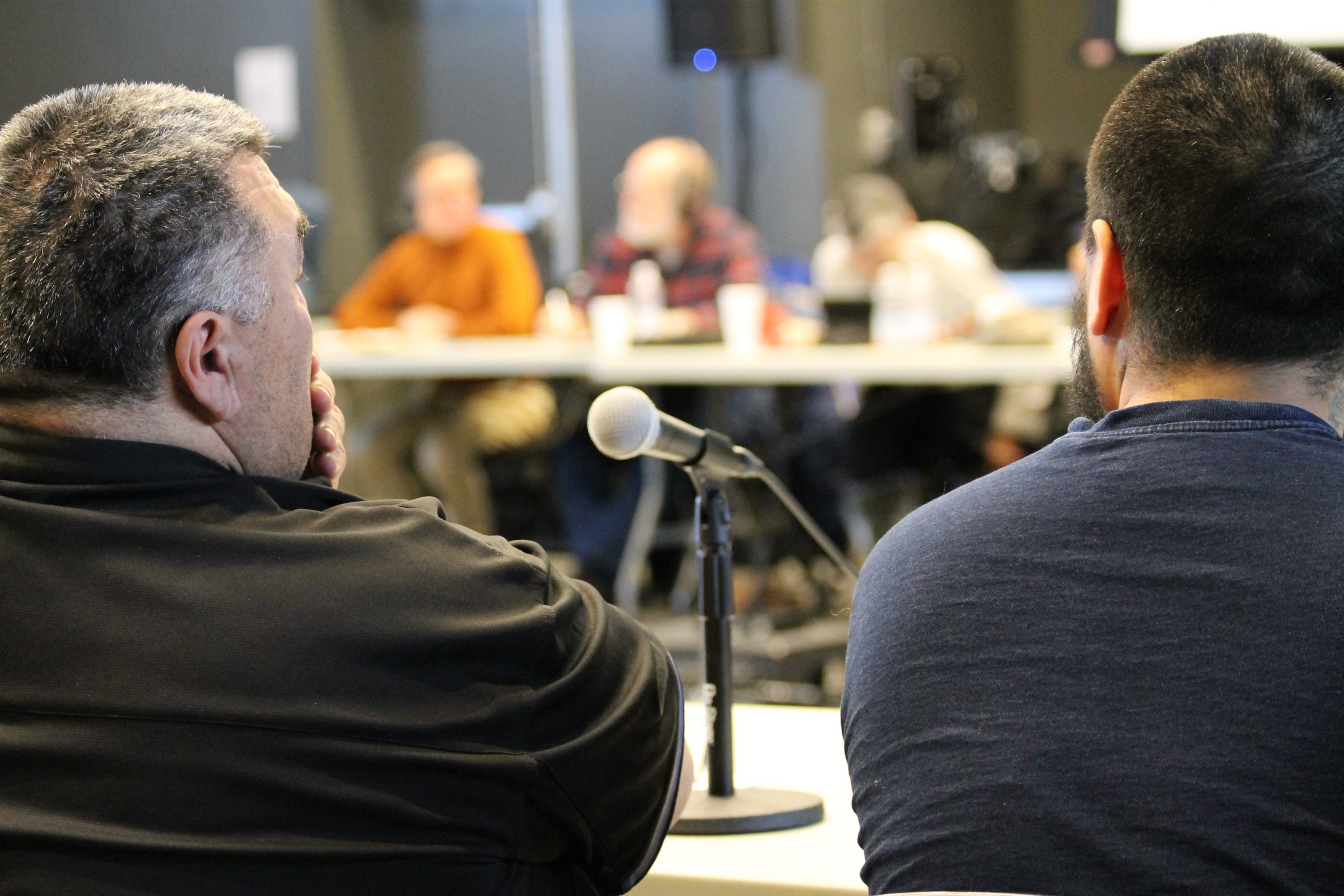 “My son was one month old when we started to debate about beluga. Today I have grandchildren and we are still debating,” said Quaqtaq’s Johnny Oovaut, left, seated next to his son Daniel, on Jan. 23 at a hearing on beluga management in the Nunavik Marine Region. (Photo by Elaine Anselmi)

KUUJJUARAAPIK—Over the three days of a hearing on future beluga management plans for Nunavik waters, the overwhelming sentiment from hunters’ representatives was that decisions should be made by Inuit, not the federal government.

The hearing, from Jan. 21 to 23 in Kuujjuaraapik, was translated into both English and Inuktitut, with the former spoken by most of the people around the table.

After the local hunters’ organizations across Nunavik weighed in, their regional representative offered a poignant statement: “I will be speaking in English because most of the people who will be deciding are white people,” said James May, president of the Regional Nunavimmi Umajulirijiit Katujiqatigininga, representing hunters.

Comments were gathered by the Nunavik Marine Regional Wildlife Board, which will put forward a new management plan for beluga, to be approved by the minister of the Department of Fisheries and Oceans.

“We need a group of people from inside Makivik, inside the Nunavik Marine Region Wildlife Board and the RNUK, to develop a group to gather information on Inuit law, what was used in the past, to help develop our own management of belugas in Nunavik,” May said.

Without that, he said, they will continue to fall under the DFO’s authority. Giving Inuit a greater say also falls in line, he said, with Makivik’s pursuit for self-determination.

The birthright organization offered its own proposal for beluga management on the first day of the hearing, calling for it to be left in the hands of Nunavik Inuit. It was a proposition supported by many around the table.

“We’re not out to eliminate beluga stocks. It doesn’t make sense to eliminate our food stock,” said Johnny Oovaut, president of the Local Nunavimmi Umajulirijiit Katujiqatigininga for Quaqtaq on Jan. 22.

“When our people are mismanaging, we tell them. Just because DFO came along and said we’re managing your animals doesn’t mean we weren’t doing it. For 4,000 years we were trying to manage our animals so that we didn’t deplete our stocks.”

The LNUKs for the Northern Villages of Nunavik spoke one after another, offering what they’d like to see in a future management plan. While beluga harvest quotas were not opposed across the board, the management systems they’ve seen so far were heavily contested.

“My son was one month old when we started to debate about beluga. Today I have grandchildren and we are still debating,” Oovaut said.

A request from the host community, Kuujjuaraapik, was made to reopen the harvest at Little Whale River, north of the community on Hudson Bay. But they want to see this for the month of August only.

“We don’t mind having a quota because we are also thinking about the descendants, we still want them to eat maqtaaq,” said Jimmy Paul, president of the Kuujjuaraapik LNUK. “We’re asking you to open Little Whale River from Aug. 1 to Aug. 31.”

Representatives from the neighbouring community of Umiujaq agreed, hoping also to access beluga in Little Whale River during that period.

They suggested that the area should be monitored closely.

“I think it would be good to create a steering committee for the [eastern Hudson Bay] stock, so everything can be implemented,” said Simon Tookalook, president of the Umiujaq LNUK. That steering committee, he said, would be made up of Hudson Bay community members—and something similar could be formed amongst Ungava Bay and Hudson Strait communities.

Dividing the three regions under the management plan was proposed by several communities, and by James May for the RNUK.

Salluit’s LNUK representatives were not opposed to a quota system, as long as it allowed communities an adequate share.

“We try not to catch everything we see. Maybe DFO thinks we do,” said Adamie Tayara. “I remember when I was growing up, I remember they were harvesting only what they needed and this would continue.”

He added that he sees many beluga passing by Salluit. “There are a lot of them that we don’t even see and DFO doesn’t even see because they can’t do their surveys when weather is bad,” said Tayara.

Several people said that the timing of aerial surveys, in July and August, means they aren’t capturing the abundance of beluga they would see in the spring. Mike Hammill, section head of marine mammals for the Laurentian Region with the DFO, explained that the timing was to avoid counts before migration when the different stocks of beluga can’t be deciphered.

Rather, they do the counts when beluga are in their own territory and can be counted separately.

Billy Palliser, representing Puvirnituq, responded to some of the concern around the table about removing quotas, saying it doesn’t mean hunting will be entirely free of regulation. There would still be certain seasons and areas closed to hunting, he said.

“You live in Hudson Strait, there are so many big white belugas, it’s time that you hunt those. We can tell the difference in which to hunt,” he said. “Eliminating quota doesn’t mean there are no rules or regulations. We are trying to say that we would like to base ourselves on our culture and tradition.”

Johnny Arnaituk of Kangiqsujuaq suggested no quota on hunting for half of the year in his community, and a quota for the other half.

Qiallak Nappaaluk, mayor of Kangiqsujuaq, said hunters from different communities come there to hunt because they aren’t allowed to hunt in the waters around their own community or have small quotas there.

“Yes, we welcome those hunters but I feel bad for them,” she said. The cost of the travel, especially with 1,000 pounds of meat, as well as for skidoos, trailers, and canoes, adds up.

“Those communities, if they want to harvest beluga they have to spend a lot of money,” she said.

“Instead of that money staying in their community, it goes to airfare. It would be better for them to spend that money in their own community.”

The issue of enforcement was also brought up by several of the hunters’ groups. They said enforcement has fallen largely on the LNUKs, as the Uumajuit wardens are stretched thin and fisheries officers are present only at the close and open of the season. It leaves them enforcing rules imposed by someone else.

Hudson Strait communities were asked by the board whether they would support a closure in the fall, during the migration of the eastern Hudson Bay beluga.

Representatives from Quaqtaq and Kangiqsujuaq offered conditional agreement. Oovaut said yes but only if enforcement of this is provided.

As part of Tasiujaq’s proposal for beluga management, its LNUK suggested a pilot project to hunt without a quota from July 1 to Aug. 31 in the waters surrounding the community, off Ungava Bay.

During this period, they would take samples of their catch for genetic testing and use conservation methods such as hunting only the bigger whales that they know do not belong to the eastern Hudson Bay population, not hunting females with calves, limiting each boat to two whales and using harpoons first so as not to lose their catch.

They’ve timed the proposed hunting season to align with the hunting closure for the nearby Nunavut community of Sanikiluaq. Billy Dan May, Tasiujaq’s LNUK president, explained the thinking that if Sanikiluaq’s closure is due to the concentration of eastern Hudson Bay population in the Eastern Hudson at that time, it would suggest that those endangered beluga are not in Ungava. But many other beluga are, he said.

Should quotas remain in place, LNUK representatives are asking for the following allowable takes: