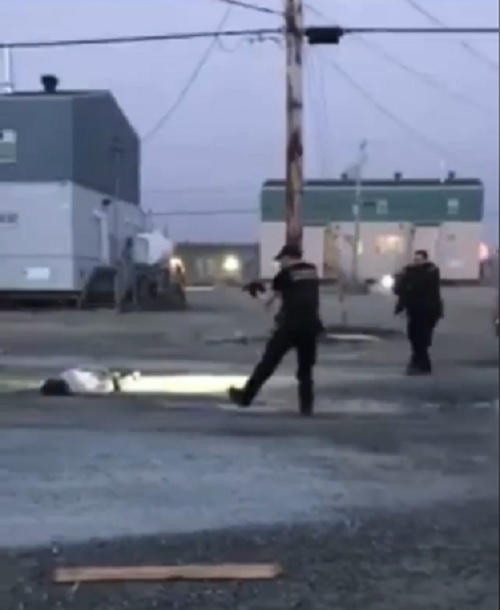 The Kativik Regional Police Force is defending the “high risk” arrest of a Nunavik suspect at gunpoint last weekend.

The July 3 arrest in Akulivik was captured on video and posted to social media.

It shows a suspect kneeling with his head on the ground, while two officers surround him with their weapons drawn.

The KRPF said the Akulivik detachment received a call reporting a knife fight that evening. When officers arrived, an individual reported being assaulted and threatened at knifepoint by a man who had since fled the scene, the KRPF said in a July 8 release.

When officers patrolled the community looking for the suspect, they found a man who fit the description, holding a one-metre-long plank of wood, the police said.

The video footage shows the officers pointing their weapons at the man as the suspect is kneeling on the ground; the wood plank is a distance away. The person filming the incident tells officers that the suspect “doesn’t have anything.”

The KRPF said no one was injured during the arrest, and the suspect was released from custody the following day.

But police characterized the arrest as “high risk.”

“Police officers must continuously assess the situation they face, and they select the most reasonable option relative to the circumstances,” said Captain Mathieu Savage.

“In this situation, they had information that the suspect had a knife, and they perceived a danger that could cause them serious bodily harm or death. Although they pointed their service weapons at the suspect, they used verbal communication to get the suspect to surrender peacefully.”