‘It’s nice to have recognition from the community,’ says Const. Mathieu Verret-Dion 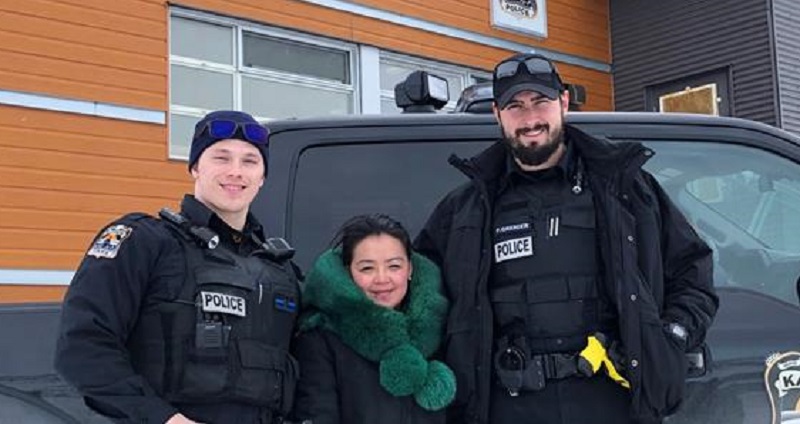 From left: Nunavik Police Service Const. Mathieu Verret-Dion, Sarah Ilisituk and Const. Frederic Grenier, pose for a photo in Salluit in April 2019, after Ilisituk recovered from a March 2019 attack. (Photo courtesy of NPS)

A pair of Nunavik police officers have been recognized for their efforts saving a Salluit women’s life during a violent 2019 attack.

Quebec’s minister of public security awarded the Meritorious Service Medal this month to Const. Mathieu Verret-Dion of the Nunavik Police Service and to his partner Const. Frederik Grenier, a former Nunavik police officer who now works for the Sûreté du Québec.

Verret-Dion received the service medal at an April 16 ceremony in Kuujjuaq, where he’s now stationed.

“I was really happy,” he said. “It motivates me to continue to do my do my job, as best as I can.”

Verret-Dion took a job with the Nunavik Police Service in 2018. He had been stationed in Salluit for about a year, when, in March 2019, he and his partner received an emergency call from a woman in distress.

She was scared and was shouting, but all Verret-Dion could make out was her name — Sarah — and the number “15.”

The officers rushed out, looking for houses that begin with that number. Verret-Dion recalled arriving at one home where they could hear a woman shouting from inside.

The officers went into the home to find a man wielding a long kitchen knife, and a woman with stab wounds. They tasered the man, arrested him and called first responders to tend to the woman.

Sarah Ilisituk, who agreed to make her story public, was medevaced that night to Montreal where she was treated in hospital for several weeks.

Her attacker, who was her spouse, was later convicted of assault.

“We were happy that we could intervene and get her help,” Verret-Dion said.

He credits the quick response to a good working relationship with his partner, Grenier.

“We didn’t hesitate for a moment,” he said. “We worked well together.”

When Ilisituk had recovered and returned home to Salluit weeks later, Verret-Dion said he ran into her one day in the community.

He said Ilisituk came over to him with her family members, who all shook the officer’s hand and thanked him for his response that night.

“It’s nice to have recognition from the community,” Verret-Dion said.

“They see a lot of officers come and go, so it’s nice for them to have confidence in us.”