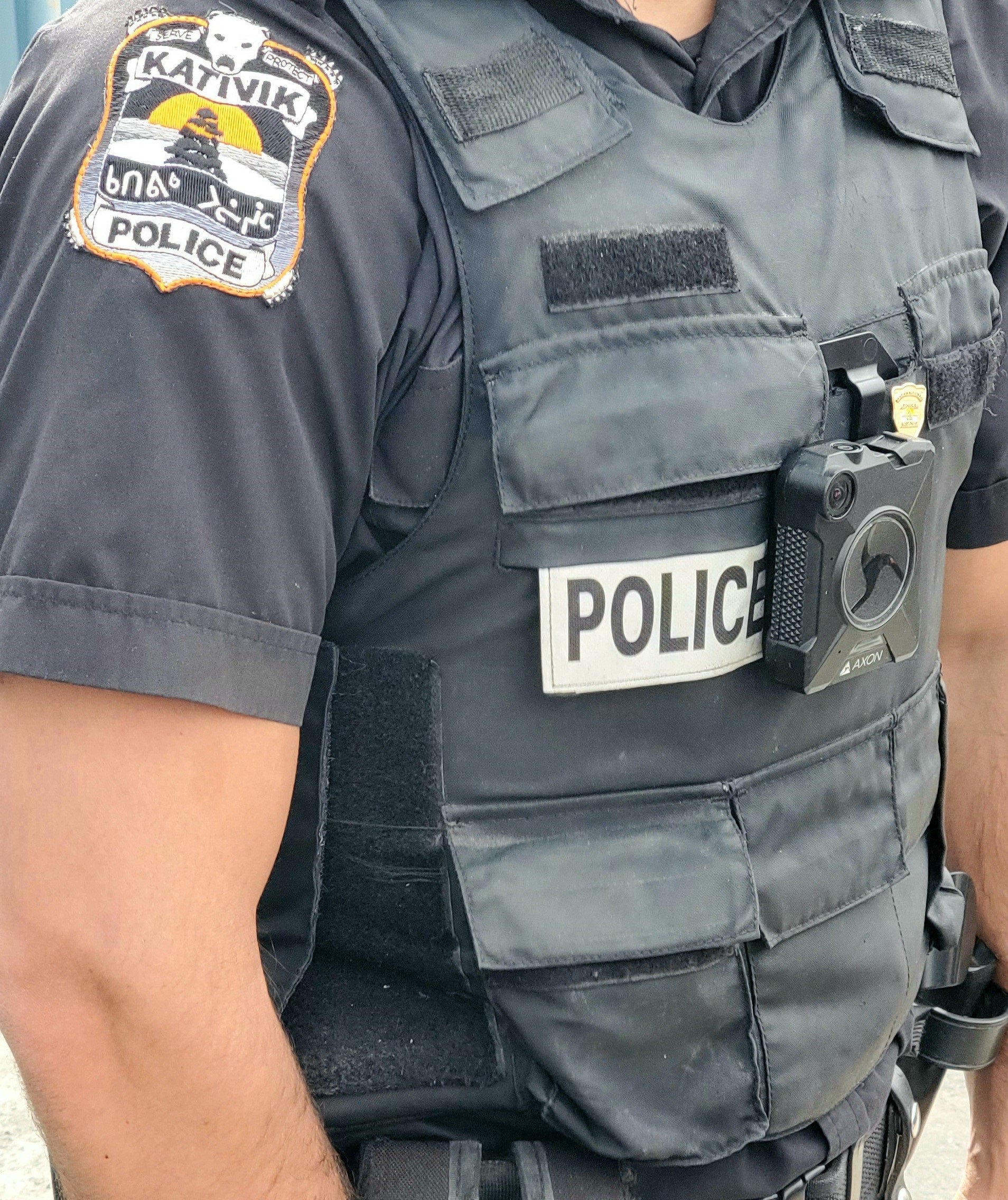 A Nunavik police officer is pictured wearing one of the organization’s body cameras. The cameras are scheduled to be deployed to officers in all 14 communities by the end of the year. (Photo courtesy of NPS)

Nunavik police to be fully equipped with body cameras by the end of the year, says chief

Nunavik’s police chief has committed to equipping officers in each of the region’s 14 communities with body-worn cameras by the end of the year.

The Nunavik Police Service launched a pilot project at the beginning of 2020, deploying six cameras worn by Kuujjuaq officers on duty to capture their interactions.

NPS chief Jean-Pierre Larose called the pilot a success, saying it boosted trust between Nunavimmiut and police, and has been used as evidence in criminal files. The organization expanded camera use to Puvirnituq and Salluit last year.

Now, detachments in the region’s remaining 11 communities should be equipped in the coming months.

“The program was a little bit delayed by due to COVID-19,” Larose said. “But we’ll get these cameras out to all of Nunavik by December.”

With that deployment, the NPS will be the first police organization in Quebec to fully equip its officers with cameras.

The NPS sits on a provincial committee that’s exploring the expanded use of body cameras within police services across Quebec.

For now, the committee offers guidelines on how the cameras should be used, Larose said.

Officers on duty are not always wearing cameras, he said. There are specific procedures for when officers use the cameras and how long they stay on, based on the type of call police receive and the subject to be recorded. There are restrictions around filming youth as well.

Nunavik police were initially concerned about how to store video footage, in a region with limited bandwidth. But Larose said the system, developed by Axon, has facilitated the easy transfer of files.

“We have what we think is the best system in North America right now,” he said. “It’s very user friendly and secure.”

The Nunavik Police Service continues to rely on the Sûreté du Québec to keep its detachments staffed across the region.

Last March, Larose requested the temporary help of SQ officers to help address the shortage, after the NPS went from an almost full complement of 86 officers to just 66.

Since then, groups of 20 southern-based SQ officers have come to work in the region on a three-week rotation.

“They are still here,” Larose said. “For sure I will need them at least until Christmas, and probably longer.”

Larose is in discussion with Quebec’s Ministry of Public Security over a potential agreement to allow the NPS to recruit directly from Quebec’s main police training institution, École nationale de police du Québec.

The NPS has recruited 30 officers in training who are interested in coming to work in Nunavik once they graduate. But ENPQ programs are backlogged due to a pandemic-related closure in 2020 that’s created a 300 person wait list, Larose said.