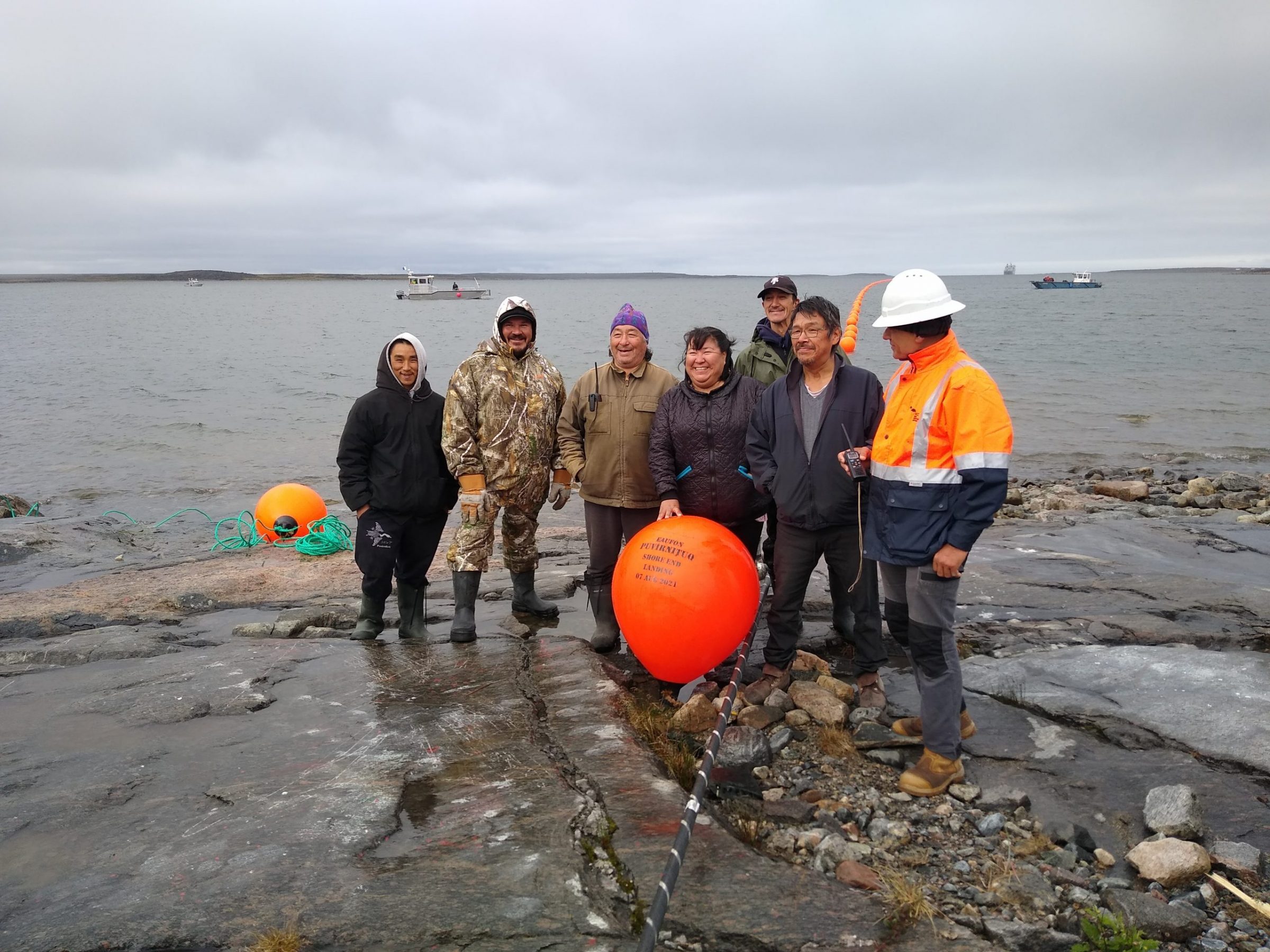 The fibre optic cable landing at Puvirnituq on Aug. 7 was attended by Puvirnituq Mayor Lucy Qalingo, centre. The cable is the first undersea fibre in Nunavik. (Photo courtesy of Dan Pellerin / KRG)

The Kativik Regional Government says it has secured the remaining money needed for its work to bring high-speed internet to the region.

In addition to funding from the federal and provincial governments, the KRG said in an Oct. 7 news release that it is receiving a total of $53.4 million from a federal fund administered by the Canadian Radio-television and Telecommunications Commission.

This past August, work began on laying an underwater fibre optic cable which will run from Chisasibi, on the coast of James Bay, north to Puvirnituq, with connections to Kuujjuaraapik, Whapmagoostui, Umiujaq and Inukjuak.

All the cable and electronics have been laid for this portion as of Oct. 1, according to Dan Pellerin, a telecommunications adviser with the KRG who helped get the projects up and running.

“We are now working on testing, commissioning, inspections and training,” Pellerin said, adding the hope is for the fibre network to be in use by January at the latest.

Next year the plan is to continue laying fibre up the coast to the Hudson Strait, to connect Akulivik, Ivujivik, Salluit and Kangiqsujuaq. Kuujjuaq would be connected to another fibre optic line running to Kawawachikamach, roughly 400 kilometres south, while the rest of the region’s communities will get increased satellite capacity.

In addition to approving final funding, the CRTC has also accepted the government’s statement of work, which details a timeline for the projects and how the projects will be completed.

Michael Gordon, the director general of the Kativik Regional Government, said the high-speed internet service will have a big impact on remote communities in Nunavik.

“Presently, as everyone’s connected by satellite, there’s latency and issues with speed,” he said. “Once we connect by fibre … that will free up bandwidth in those communities [which] will be spread out to the rest of the community.”

Gordon said freeing up bandwidth will allow essential services to stay connected to internet and allow people to more easily work or study from home.

“As bandwidth is being used by all the communities, as the communities migrate to fibre, we take them off of satellites, [and] we redistribute that capacity to the other communities that are still on satellite,” said Gordon said.

Kuujjuaq is expected to receive faster internet via a fibre-optic cable running to Kawawachikamach. An earlier version of this story said the community would be connected via microwave towers.