“We’re designing it to be for the people, by the people” 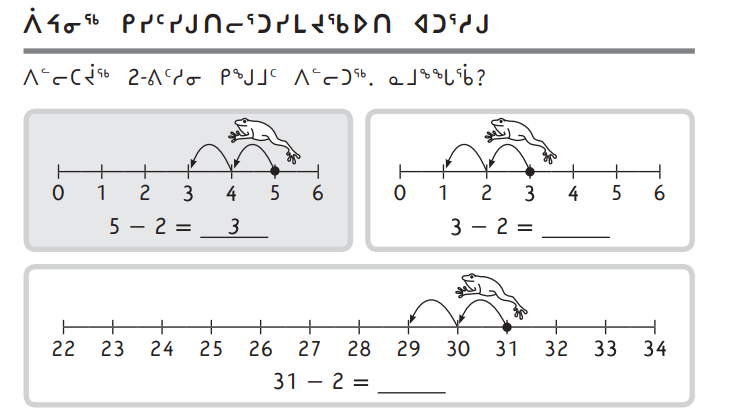 This example from the Nunavik-IcE website shows a JUMP math activity for Grade 2 students learning subtraction. JUMP math is one of the many partner organizations of the school board, whose resources can be found on the new web portal. (Screenshot from Nunavik-IcE).

Nunavik’s school board has rolled out a new online hub to help educate the region’s students at home during the COVID-19 pandemic.

The Nunavik Inuit-centred education platform—referred to as Nunavik IcE—launched last week and is now available for use by students and their families, Kativik Ilisarniliriniq announced on April 15.

Nunavik IcE is linked to the schoolboard’s website and has been under development for about three years, said Etua Snowball, the board’s director of education services.

It was first conceived as a resource for educators to find lessons shaped by the Inuit world view, rather than trying to bring that world view into pre-existing lessons.

“I truly believe we do have a lot of students that are not going to school, and I take myself for example, I didn’t understand a lot of the concepts because I wasn’t familiar, I hadn’t seen them before,” he said.

“But taking these concepts and applying them to our environment and culture, but using the same calculations and science, people are able to recognize them better and understand. This was the whole idea behind it and it still is.”

The Nunavik IcE platform was initially scheduled to launch in June, but it’s now online a couple of months early and aimed at a wider audience.

“We had to choose quite quickly and divert it in that direction and it was a very fast diversion because we didn’t foresee COVID-19, of course,” said Snowball. “Luckily, we have a great team to make that happen.”

As of March 24, KI announced the school year in Nunavik was officially over, meaning students would spend the remainder of the semester at home, leaving families to take on more of the responsibility for their children’s education.

“It was a matter of a couple of weeks where we had to think of concepts of how we were going to divert it and change over to this kind of platform, so we were reaching out to parents and families alike,” said Snowball.

The activities for students to work on at home are marked with a greenhouse logo on the website.

There are different tasks, from worksheets to stories, available for grade levels from Kindergarten to Secondary 3.

“We had to get it up and running as soon as possible with content, but a lot more will be coming,” said Snowball.

“We’re actually still designing the whole concept of it all because we’re designing it to be for the people, by the people,” said Snowball.

The goal of the hub, said Snowball, is to capture the attention of students by making their lessons more applicable. Through this, he said they hope to improve class attendance and attentiveness.

“I was a teacher for 14 years and I’ve seen the ins and outs of what catches their interest and what doesn’t,” said Snowball.

“It’s something with this modern day of learning, we have the two concepts of Western ways and we still have our Inuit ways also, so we have to find the best combination of both.”

Once students are back in classes, Snowball said this platform will remain open and continue to grow—both in its original form as a resource for educators, but also as a tool for parents and families.