“I think kids are eager to go back” 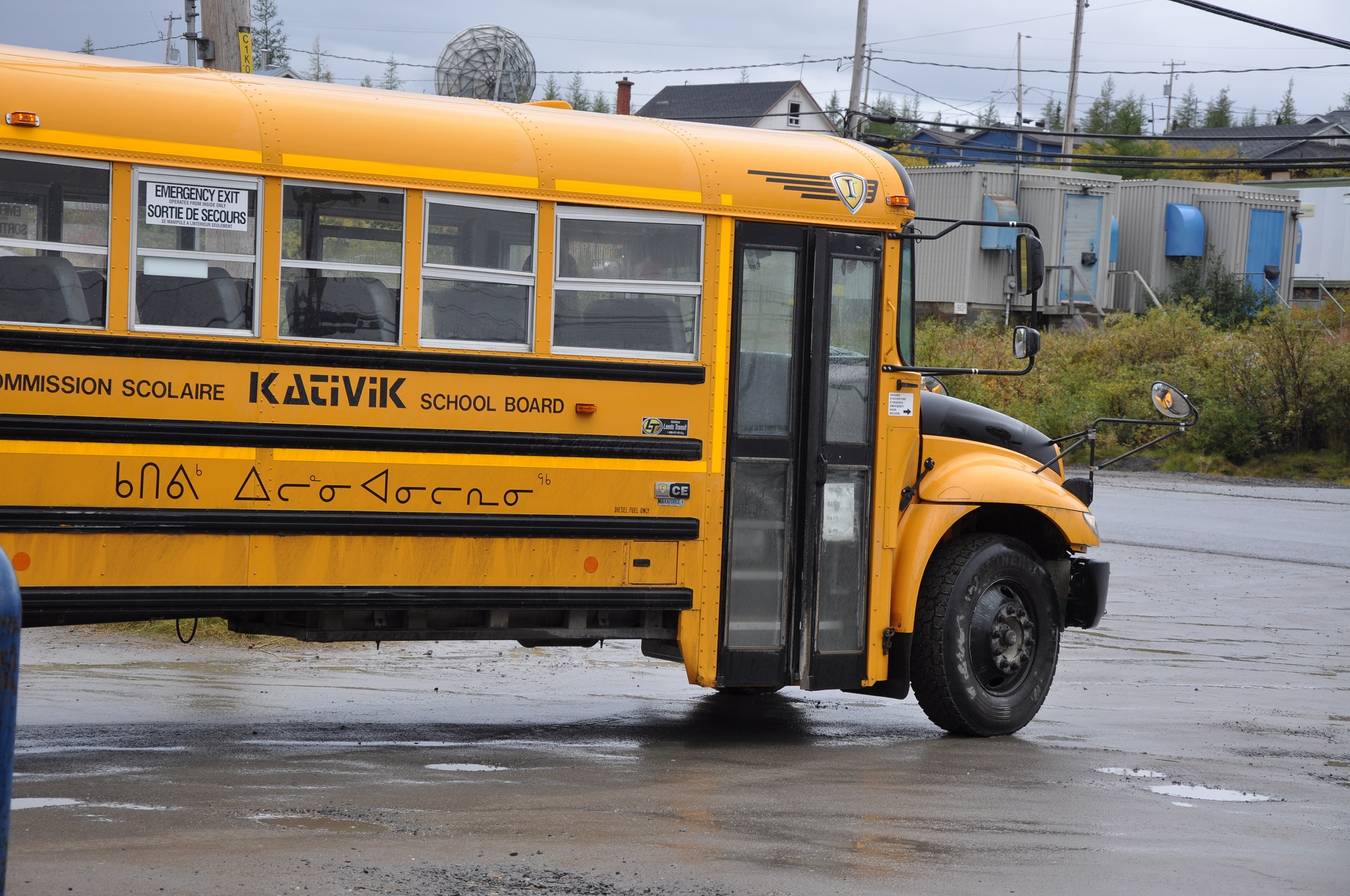 A Kativik school board bus drives through Kuujjuaq. Most schools in Nunavik are set to reopen on Aug. 31. (Photo by Sarah Rogers)

Nunavik elementary and secondary students will start to return to school on Aug. 31, Kativik Ilisarniliriniq announced this week.

The Nunavik school board will open schools in all but three of the region’s communities. Construction at schools in Quaqtaq and Kangiqsujuaq and at Salluit’s Ikusik high school will delay those centres’ openings until mid-September.

Schools will reopen for the first time since KI shut down classes and schools on March 24, as much of the province went into lockdown due to COVID-19.

While Nunavik is currently free of any active COVID-19 cases, KI’s Secretary General Harriet Keleutak said the board is still waiting for directives as to what classroom learning will look like.

Scheduling, class size and classroom setup are still to be determined; in some cases, it will depend on student enrolment towards the end of August. Secondary students may do some learning at home, depending on what technology is available to them.

To be prepared, the first cohort of southern-based teachers will take chartered flights to Nunavik on Aug. 1, Keleutak said. A group of 89 teachers is being quarantined in a Montreal hotel where they’ll be tested for COVID-19 over the next few days.

If they test negative, they’ll be able to fly north and then start a 14-day quarantine once they arrive in their home communities.

“We’re sending them back gradually because they have to be quarantined for 14 days once they get to the communities, even if they test negative,” she said. “We have no choice [but] to postpone the opening of the schools.”

“The main concern is safety for everyone–that’s the one thing we’ve heard,” she said. “To make sure that we have put everything in place, so that students are secure in class.”

Nunavik’s schools operate on varied schedules but, typically, some would open in mid-August. The delayed opening may push the school year later in 2021, but Keleutak said scheduling is still in the works.

Fortunately for KI, filling teaching positions has not been a major challenge this year, as has been the case in years past. The board still needs to fill 12 teaching positions, most of which can be filled locally.

Final grades for the 2019-20 school year were being determined by a student’s first- and second-term grades, which teachers would use to decide whether students should be moved to the next grade level. The school board has yet to say what percentage of its students will move ahead this year.

“Education is a big component in each of our communities”

The KI’s council of commissioners will meet this week and again in August with its local education committees to try and get a better sense of families’ needs and concerns as students return to school for the first time in almost six months.

“I think parents are very much wanting to send their kids back to school,” said Robert Watt, chair of the KI’s council of commissioners. “I think kids are eager to go back too. Education is a big component in each of our communities.

“I think things would be quite different if we had a big outbreak,” he added. “But even with the [COVID-19] cases we’ve had [in Nunavik], we’ve been able to contain them.”

The KI has drafted a plan for how to respond to any COVID-19 cases within its schools, which largely calls for closing down classrooms or the entire school, depending on who was infected and what contacts that individual had.

“Testing is going to be very critical,” Watt said.  “All these plans are based on today, but they could change in a few weeks. It’s important to consider that it’s not a school issue, it’s a community issue.”

That means that Northern Villages in Nunavik have a role to play too. All but one of the region’s communities rely on trucked water and sewage—important elements in keeping schools sanitary.

“We need the support of municipal services in order to make our schools function as they should,” Keleutak said.

“And in some communities, we’re lacking janitors—a very important job. If schools are not clean, we’ll have to close them,” she said.

“We’re looking for janitors and it’s a good paying job. We’re hoping that all those positions have filled before we open schools.”

As teachers start to fly north on Aug. 1, post-secondary students in Nunavik will start to head south to prepare for the start of classes at Montreal-area CEGEPS, or community colleges, and universities.

Nunavik Sivunitsavut will also reopen at the end of August, with preliminary plans to spend 50 per cent of the year in class, and the other 50 per cent online.

Watt said the board still has to assess the technology needs of its students to determine who can work from home, with the goal of approaching Quebec’s education department for support.