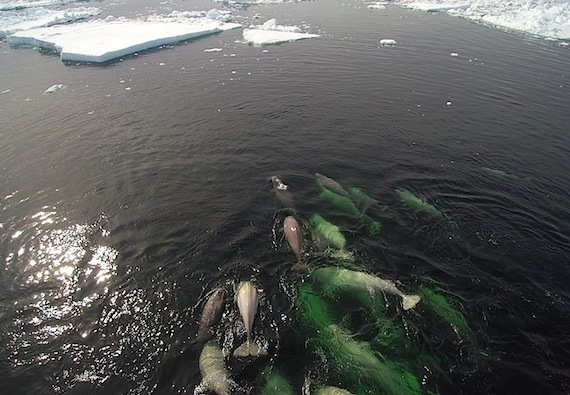 Fisheries and Oceans Canada has approved an interim beluga management plan for Nunavik, allowing hunters to take advantage of an autumn whale hunt before freeze-up.

But wildlife officials say the Department of Fisheries and Oceans sent out the notice Oct. 30 without first communicating its decision to the regional authorities—the Nunavik Marine Region Wildlife Board and regional harvesting organization—causing some conflict and confusion this past week.

DFO’s interim decision approved the harvest of 12 Eastern Hudson Bay beluga whales this fall, with the goal of confirming its complete five-year management plan by the end of the month. The previous plan expired earlier this year.

Nunavik Marine Region Wildlife Board executive director Tommy Palliser said the organization received the federal department’s interim decision on Oct. 30, along with the its notice to re-open the harvest as of Nov. 1. The season had been closed since July 29 after hunters reached a temporary quota set by the Fisheries Department. The season is normally open throughout the ice-free season.

Typically, once a quota is confirmed, the wildlife management board will work with regional and local harvesting organizations to allocate numbers to the communities and provide any technical help ahead of any harvest.

“We were not given any time at all to do all of this,” Palliser said.

“There is a reason these organizations were created, and there is a reason why there is a process to follow,” he said. “The communities, right from the start, got a confusing message and without any thought into the processes.”

The beluga harvest did indeed open at the beginning of November, despite the short notice. DFO sent out a revised notice Nov. 6, clarifying its interim decision provided a quota of 12 Eastern Hudson Bay belugas to conclude the hunting season.

“This interim plan intends to offer protection for the endangered EHB beluga stock, while providing a monitored hunting access for Nunavik communities.”

Regional wildlife authorities stressed that the Inuit beluga harvest has always been for sustenance, and not commercial purposes.

But Fisheries Minister Bernadette Jordan rejected that plan in July over concerns related to conservation efforts, although the details have not been made public.

The wildlife management board then re-submitted a plan to address those concerns, requesting a response by the end of October to allow time for a fall harvest.

Palliser said the board should receive a decision on the complete, five-year management plan by Nov. 28.

“We are all just waiting patiently now for the final decision,” Palliser said.

“We are pushing for a bottom-up approach to all of this, to show that we are very much capable of managing our own marine mammal management plans if we are given the opportunity and tools to do so.”