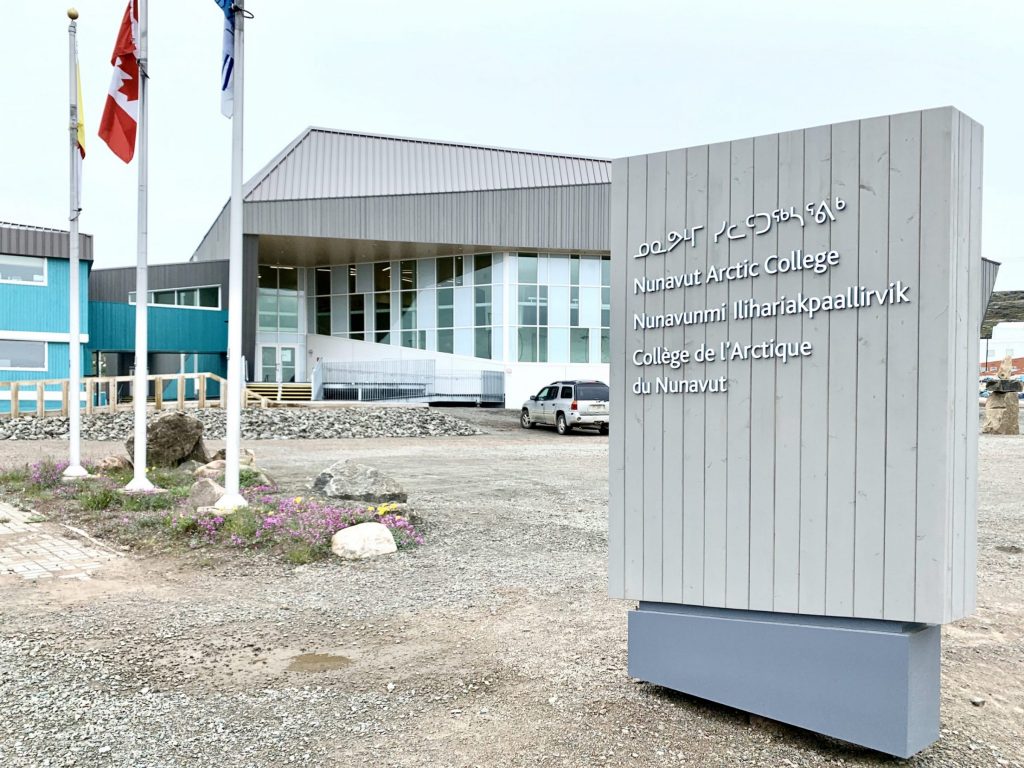 Nunavut Arctic College will not admit a new class of students to its teaching program this fall because of complications caused by its spring closure, NAC’s acting president says. (Photo by Emma Tranter)

When Nunavut Arctic College reopens this fall, it won’t be welcoming a new cohort of students to its Nunavut Teacher Education Program.

The college announced its reopening plan on Aug. 11 after it shut down this spring amid COVID-19 concerns.

The plan outlines four stages of reopening depending on whether there is COVID-19 in the territory.

Rebecca Mearns, acting president of Nunavut Arctic College, said the college decided to cancel the first year of NTEP because of challenges caused by the spring shutdown.

“Planning for a new cohort, the hiring, identifying communities, and things like that takes place in the winter and spring. The disruptions and the switch to online learning in the spring meant that many of our faculty and staff were focused on ensuring that we have everything for years two through four to continue their studies,” Mearns said.

Last year, the program’s fourth and final year was run in Iqaluit and Kugaaruk. Students in their fourth year must complete a work placement to graduate. But because of the shutdown, those students were not able to complete the program, Mearns said.

“We’re still supporting the fourth-year students from 2019-20 both in Kugaaruk and Iqaluit to complete some of their course work that was disrupted during the spring closures. So, because we’re still working with those cohorts, we haven’t been able to open up a new cohort.”

The college is working with the Department of Education to secure work placements for the fourth-year NTEP students, the reopening plan states.

Mearns said 12 people had applied to the program so far this year. All have been notified of the cancellation and have received information on how to defer their acceptance.

“The applications have yet to be reviewed, but if they do wish to apply for the next year, then we would support them in doing so,” Mearns said.

The program will take new students in 2021.

John Fanjoy, president of the Nunavut Teachers’ Association, said he first heard about the college’s decision three or four days ago, after he received a media request about it.

“I had no idea that this was occurring. Nunavut Arctic College had not reached out to the Nunavut Teachers’ Association. There was no consultation or even any contact that was made before they went ahead with this decision,” Fanjoy said.

Fanjoy said he believes the cancellation will further set back the Government of Nunavut’s goal to recruit Inuktut-speaking teachers.

“The stated goal for the education program in Nunavut right now is to try to have as many bilingual Inuktut-speaking teachers as possible in our education system.… This sets that goal back further by having a complete cohort not entering the program or graduating four years from now.”

Fanjoy also said a letter sent by the college to prospective NTEP students offers to redirect students to another program at the college.

“NAC has made the decision to consciously redirect prospective education students into other fields, which goes directly against the stated goal of the Department of Education, which is to produce more bilingual Inuit teachers,” he said.

Bill 25, An Act to Amend the Education Act and Inuit Language Protection Act, states the education minister will develop and maintain a strategy for the retention and recruitment of Inuit-language teachers and provide the Nunavut Arctic College “with any reasonable assistance it requires with respect to its Inuit language teacher education programs.”

“NAC has made the decision not to increase funding … and add it to NTEP this year to make up for that shortfall. They’ve decided to cut programming instead of providing more funding,” Fanjoy said.

Students to be spaced two metres apart in college classrooms

Stage one of the college’s reopening plan will go ahead if there are no confirmed cases of COVID-19 in the territory. Students will attend classes in person but will be spaced two metres apart from each other. Students will also have designated classrooms and seating for all classes.

That means some class sizes could be reduced, Mearns said.

“For our continuing programs, we’re ensuring that there’s enough space for all of the students to be seated in their classrooms.”

The college also saw a drop in applications this year, Mearns said.

“We’re still looking at what the overall impacts of that were and how that impacted our application numbers and enrolment numbers,” she said.

Stage one also includes enhanced cleaning. The college will be open to the public, but visitors will need to sign in.

Stages two and three would involve increased restrictions. Students would still be able to attend school, but in-person attendance would be flexible.

Mearns said the college is prepared for at-home instruction if the need arises.

“While many other academic institutions are going fully online, we do have some limitations as far as technology goes to be able to go fully online right away, but the plans are in place to ensure that classes continue should a case of COVID come to the territory,” Mearns said.

The fourth stage would occur if there were community transmission of the virus, and all schools in the territory would close for a minimum of 14 days and reopen on the advice of the chief public health officer.

A response from the Department of Education

In an email, the Department of Education said it “recognizes the limitations COVID-19 has put on operational capacity and we look forward to continuing to collaborate with the college on the refocused approach to the Nunavut Teacher Education Program (NTEP).”

When asked how the cancellation affects the department’s goals to increase the number of Inuktut-speaking teachers in the territory, the department said the impacts “can be mitigated through our continued partnership with the college.”

“The funding from the Government of Canada, announced in September 2019, for revitalizing and strengthening Inuktut in Nunavut, is intended to support the Nunavut Arctic College’s delivery of additional NTEP cohorts and a laddered approach to NTEP in the near future. We will continue to collaborate with the college through these initiatives to build our needed workforce of qualified bilingual educators,” the department said in an email.

The department also said students who applied to NTEP this year can reach out to them at info.edu@gov.nu.ca.