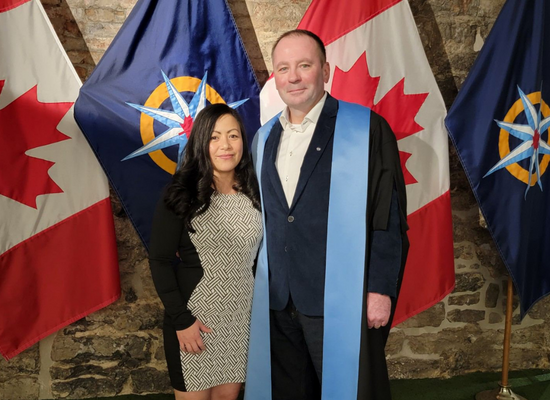 Jason Carpenter, senior instructor at Nunavut Arctic College, shown here with his wife Jovelyn, was welcomed into the Royal Canadian Geographical Society’s College of Fellows on Nov. 18 at the society’s gala at the Canadian War Museum in Ottawa. (Photo courtesy of Jovelyn Carpenter)

Few individuals who go into the field of geographic study likely do so believing they will ever be celebrated for their efforts.

However, that is what recently happened to Jason Carpenter, a long-time senior professor of the environmental technology program at Nunavut Arctic College.

Carpenter was welcomed into the College of Fellows of the Royal Canadian Geographical Society on Nov. 18, joining the likes of other explorers and educators such as Vilhjalmur Stefansson, who carried out several Arctic expeditions in the early 20th century, and Louie Kamookak, an Inuit oral historian from Gjoa Haven.

In an interview Tuesday, Carpenter said he is humbled by the honour as he reflected on the accomplishments of other fellows.

“I think we all appreciate being recognized for our work or for our efforts,” he said. “I am very grateful for the nomination, for sure.”

The Royal Canadian Geographical Society was founded in 1929 to encourage an appreciation for Canada’s vast and varied geography, and with a mandate to “make Canada better known to Canadians and to the world,” according to its website.

Individuals selected to be fellows are Canadians who embody the values and tenets of the society: The determination to build, courage to explore, and with a steadfast love of country.

Trevor Bell, a geographer and research professor at Memorial University in St. John’s, N.L. and society fellow, nominated Carpenter in recognition of his 21 years as an educator and leader in Nunavut.

“Through his leadership of, and partnership development with, the environmental technology program, [Jason] has been fostering geographic literacy for hundreds of Nunavummiut for several decades,” he said in an email to Nunatsiaq News.

Carpenter said he’s deeply committed to learning and teaching in Nunavut. He came to the region more than 26 years ago to be a student in the environmental technology program, which he has now taught for more than 20 years.

His students engage in classroom work, labs and fieldwork that integrates traditional knowledge-sharing with elders and Inuit professionals as they learn to protect, conserve and preserve Nunavut’s natural environment.

As proud as he is to have received the recognition, Carpenter is emphatic that it’s the graduates of his program who are in government positions and Inuit-led organizations who are making an impact.

“We need guardians and we need stewards. We need people with the capacity to protect the land,” he said. “It is vital to Inuit, and to Inuit culture.”